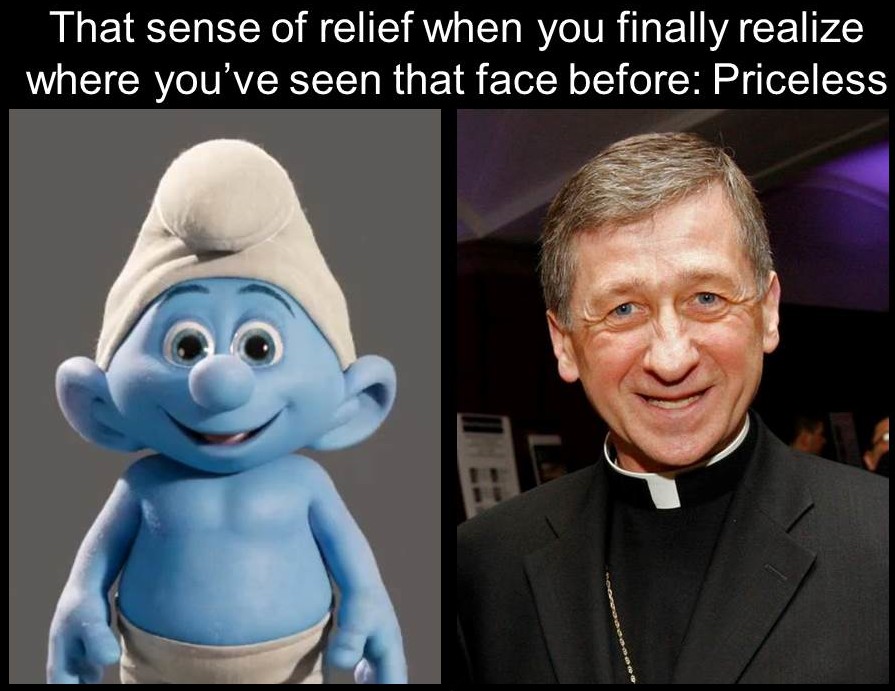 Earlier today, Blaze (as in, flaming) Cupich delivered an address at “The Protection of Minors in the Church” meeting in Rome. If his intention was to convince outside observers that the hierarchy, both in the Vatican and elsewhere, is prepared to cease playing one of its favorite games, Hide-the-Homo, he failed miserably. If, on the other hand, his goal was ingratiate himself with the homosexual network, he hit himself grand salami (baseball reference, no pun intended).

As a card carrying Bergoglian, it comes as little surprise that Cupich rambled for a full thirty minutes; delivering a nearly 4,000-word text, 90% of which was devoid of substance, never mind featuring anything even remotely Catholic.

Like any good Novus Ordo homilist would, he began his remarks with a heartwarming story; regaling his audience with the following:

I presided at a Memorial Mass, attended by many of the former students who survived the [1958 Catholic elementary school] fire and family members of those who had died. One of the persons I greeted before the Mass was a ninety-five-year old mother of one of the children who died in the fire.

She was an Italian immigrant, who told me in her native language, but also by the pitiful look in her tearful eyes, that the sting of her loss was still as sharp as the day her nine-year old daughter perished. She showed me the holy card with her daughter’s picture. She clutched it in her hand as something very precious. She had kept this santino for six decades since the day of her little girl’s funeral.

Blaze returned to the old lady at the conclusion to his remarks:

In closing, I want to bring you back to that Memorial Mass… During the recessional hymn the elderly immigrant mother who had spoken to me earlier, still holding firmly the santino in her hand, stopped me to tell me how comforted she was by the celebration, consoled that the church had not forgotten her child. Then she did something quite extraordinary and so very symbolic. She placed the santino in my hands, entrusting her child to the church whom she recognized as Pietà, a loving mother. Sisters and brothers, we must work tirelessly in these days to justify that trust and honor such great faith.

Sniff… Sniff… Oh, yes, quite extraordinary that she would hand this treasured heirloom to Blaze for safekeeping!

One small problem, however: As anyone who, like me, grew up in an Italian-American household will attest, that holy card (supplied by the local funeral home) was no doubt one of dozens of others just like it to be found scattered throughout that poor woman’s house; tucked away in Bibles and hand missals, positioned on or behind Crucifixes, propped up in the good china closet, slipped into the frames of all manner of religious art, in homemade shrines complete with candles and statues, mixed in with family photos, on bookshelves surrounded by blessed palms, on nightstands, etc.

Early in his presentation, Cupich made certain to confirm that the problem of clerical buggery among consenting grown-ups isn’t on the agenda. This he did by defining the task at hand as “confront[ing] effectively the scandal of clergy sexual abuse that has wounded so many little ones.” From there, he went on to bewail the plight of the children more than a dozen times.

This is a common ploy among liberals; playing the it’s for the children card as a means of drawing attention away from the underling evil. Just like the heartwarming story about the old Italian lady, it’s all about emotion over substance with these people.

Please allow me to digress for just a moment…

With regard to the matter of homo-clerical activities that include consenting grown-ups, though I may take some heat for saying so aloud, I count those cases involving Uncle Ted and his seminarians among them. In other words, I’m not buying the “vulnerable adult” excuse in such instances; not for a second.

Now, this is not to absolve Mr. McCarrick in the least; it is simply to say that any adult male who 1) climbed into bed with the old pervert, and 2) stayed there while he groped away, clearly brought his own homo-deviant / daddy-issues to the table, which is probably why he was handpicked for cuddle time in the first place.

They remained in bed out of intimidation and fear of reprisal; namely, concern over the possibility of having their vocational journey cut short!

How is that any different than the wannabe actresses that saddled up with Harvey Weinstein in exchange for a shot at fame and fortune? Let me guess – it’s because those poor seminarians were simply trying their best to answer God’s call. Right!

With few or no exceptions, I strongly suspect that the “vulnerable” seminarians that shared the sheets with McCarrick were ticking gaybombs well before they ever visited their diocesan vocations office, which all-too-often acts as a recruitment center for just such men.

Back to Blaze Cupich’s address, which was full of histrionics and flowery prose, speaking of such men…

Cupich referred to the work of “institutional reform” necessary to address “the reality of sexual abuse by clergy” as “an enormous challenge.”  He also spoke of “the immensity and the importance of the task.”

An enormous challenge? An immense task?

Really? What’s so difficult about keep your filthy hands off of our kids’ genitals?

In order to tackle this unwieldy beast, Blaze proposed “four synodal principals,” the first of which was “Radical Listening.”

What in the Hell does this even mean?

OK, it must be active!

No… that’s not dramatic enough; it must be radical!

I’m sorry, but men don’t speak this way; most especially in response to the homosexual molestation of minors. This guy is either gay, or so close to it that he might as well be.

If his call to “radical listening” isn’t indication enough of his leanings, he said that when a survivor of homo-clerical abuse approaches the Church, it’s “an invitation for the Church to genuinely be Pietà.”

We went from “being Church” to “being Pietà!”  An upgrade? Who knows. Either way, Blaze was so delighted with this turn-of-phrase that he went back to it numerous times.

Again, who among men (real ones) speaks like this?

Blaze then moved on to principle number two: “Lay Witness.”

No, not as is in laymen catching homo-clerics in the act of molesting minors, but rather laymen helping the Church to understand just how unacceptable such activities truly are. He explains:

In large part it is the witness of the laity, especially mothers and fathers with great love for the Church, who have pointed out movingly and forcefully how gravely incompatible the commission, cover-up and toleration of clergy sexual abuse is with the very meaning and essence of our Church … The unique and graced perspective of lay men and women, mothers and fathers,informs our Church in so profound a manner on this tragedy…

So, you see, if not for those parents who became enraged after discovering that a priest had molested their kid, and that their bishop had responded by playing hide-the-homo, it never would have dawned on these idiots that such evil activities are “gravely incompatible” with the mission of the Church!

I’ll spare you the details concerning principles three and four (“Collegiality” and “Accompaniment” respectively, which are self-explanatory enough) by moving on to the meat of Blaze’s proposal – “the specific application of accountability through institutional and legal structures … in cases involving the misconduct of bishops and their mishandling of cases of child abuse.”

Note the deliberate choice of words, “child abuse.” This is by design – to draw attention away from the reality that we are largely talking about homo-deviant men molesting post-pubescent adolescent boys.

In any case, Blaze set forth his vision under three headings: 1. Setting Standards for Investigation of Bishops, 2. Reporting Allegations and 3. Concrete Procedural Steps.

This portion of the presentation was focused on how to, and to whom, report episcopal misconduct in their handling (or hiding) of sexual abuse. Blaze proposed “a dedicated telephone line and/or web portal service to receive and transmit the allegations.”

Not a bad idea, I suppose. Maybe they should call it the Homo-Clerical Hotline.

In any event, Blaze spoke about the necessity of gathering “all relevant information expeditiously, in collaboration with lay experts to ensure the professional and rapid execution of the investigation and conclude the investigation promptly.”

Obviously, the most expert persons among the laity in the matter of investigating sexual assault are, of course, detectives in the employ of law enforcement agencies. But get this, Blaze went on to say:

Wherever the civil law requires the reporting of abuse of minors that law must be followed and the policies should make clear those requirements.

In other words, don’t involve law enforcement unless absolutely necessary. If the law provides a loophole that allows for not reporting the sexual abuse of a minor, by all means take it!

All in all, I’d say that Blaze did his counterparts in the Church’s homosexual network proud today, and quite possibly may have even punched his ticket to a prestigious office within the Vatican.