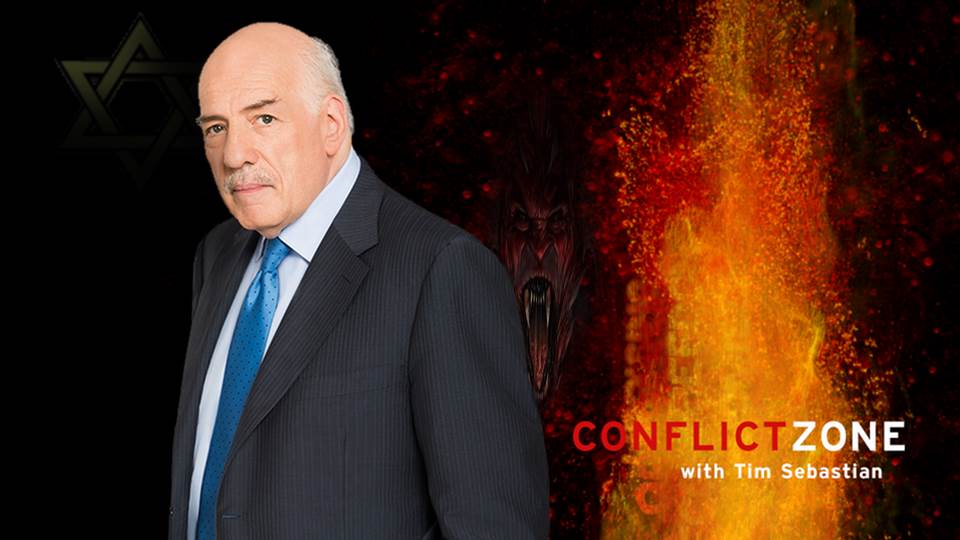 I am certain that when the Superior General of the SSPX, Bishop Bernard Fellay, sat down to be interviewed by Tim Sebastian for the program “Conflict Zone,” he did so motivated to accomplish some good.

I am also certain that his interviewer’s designs were far less pure.

Sebastian, who fancies himself a journalist who can “get through the spin to the truth,” once remarked that he doesn’t ask questions of his interviewees to which he doesn’t already know the answer. Don’t you believe it.

It is entirely evident having watched his interview of Bishop Fellay (which you may watch below, but be forewarned that it will elevate your blood pressure) that he is truly nothing more than a glorified shock-jock with a camera crew; an obnoxious self-serving blowhard who is neither the least bit interested in the truth nor even remotely well-informed on matters Catholic.

He also happens to be the willing servant of a globally powerful anti-Catholic taskmaster. (We’ll return to that point momentarily.)

I had never even heard of Tim Sebastian until yesterday, but a five minute review of his body of work on Youtube alone is enough to indicate that this particular interview request should have been flatly denied; not because anyone need fear such a belligerent jackass as he, but because the man simply is not worthy of the privilege.

Oh, well… what is done is done.

For now, I’d like to address the topic that is headlining the interview; the ever popular leftist charge of anti-Semitism.

In January of 2013, during a conference given in Canada, Bishop Fellay said that among those most vocally opposed to the idea of Rome granting the SSPX formal jurisdiction are “the enemies of the Church: the Jews, the Masons, the modernists.” 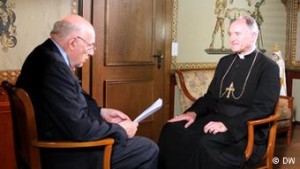 Tim Sebastian opened the interview by zeroing-in on this comment in order to suggest that the Society is anti-Semitic, and given the source of his meal ticket, I would say that this line of attack was entirely predictable.

ARD is the world’s largest public broadcaster, with more than 20,000 employees and an annual budget of over $7 billion, with a substantial part of its revenues generated by a mandatory government fee that is levied against German households.

Deutsche Welle (DW), Tim Sebastian’s employer, is directly funded by the federal Bundestag parliament, a German legislative body that is roughly equivalent to the U.S. Congress.

According to its mission statement, DW seeks to convey, via their international broadcasts, that theirs is a nation “rooted in European culture … as a liberal, democratic state based on the rule of law.”

As many readers are well aware, the so-called “rule of law” in Germany is such that one dare not even whisper a word that could in any way be construed as an insult to “the Jews” for fear of indictment on charges of inciting hatred. This is a land wherein one can literally be imprisoned as a “Holocaust denier” for simply questioning widely accepted WWII death figures.

As a direct beneficiary of such a government’s funding, one can hardly be surprised that DW, via its vile little mouthpiece, Tim Sebastian, went out of its way to accuse Bishop Fellay and the SSPX of anti-semitism.

That said, let’s be very clear: The object of Sebastian’s attack was not so much the Society as it was the Holy Catholic Church; a nemesis of politically correct media giants like ARD and DW not to be confused with the ecumenical church-of-man that was born at Vatican Council II.

Indeed, it is obvious from the totality of the interview that one of Sebastian’s main objectives was to paint anyone who continues to embrace Eternal Rome and her timeless decrees as if they are an enemy of the Church; meaning, of course, the “new-and-improved” conciliar version that no longer condemns, nor actively seeks to convert, anyone.

In other words, Tim Sebastian was doing the bidding of “the Jews” from the very moment he landed in Metzingen.

At this, let’s talk about what is meant by “the Jews.”

In response to the feigned outrage that ensued following Bishop Fellay’s remarks, the SSPX issued an explanation:

The word ‘enemies’ used here by Bishop Fellay is, of course, a religious concept and refers to any group or religious sect which opposes the mission of the Catholic Church and her efforts to fulfil it: the salvation of souls.

No matter, Sebastian didn’t really want an explanation; he was more interested in quoting Fr. Federico Lombardi who said, “It is absolutely unacceptable, impossible, to define the Jews as enemies of the church.”

What Sebastian intended as a “gotcha,” however, was yet another reminder to authentic Catholics of just how far the men of modernist Rome have fallen.

To demonstrate just how reasonable, and Catholic, Bishop Fellay’s words truly were, one need look no further than Sacred Scripture wherein we are told:

“Now when it was late the same day, the first of the week, and the doors were shut, where the disciples were gathered together, for fear of the Jews” (John 20:19)

Clearly, it is understood that “the Jews” in these instances does not refer to every individual Jew as if each one was to be feared; rather, it refers to that well-organized group of which it is written elsewhere, “the Jews consulted together to kill Paul” (cf Acts 9:23).

In fact, the disciples themselves, Paul included, were Jews!

There can be no doubt that “the Jews” as so mentioned in Sacred Scripture were indeed properly understood as “enemies of the Church” insofar as they had set themselves in opposition to her mission. Even so, it may help to recall what Our Blessed Lord had to say about those who would oppose Him:

“He who does not gather with me scatters…” (ibid.)

My friends, this is what it means to be an “enemy of the Church,” and it is beyond any question whatsoever that it is an apt description of the self-identified Jews of today.

This interview should never have taken place. Now that it has, however, let it be said that to the extent that Bishop Fellay was unjustly treated for the high crime of speaking after the manner of Sacred Scripture, and for believing as the Church has always believed, blessed is he.

Novus Ordo: The mask is on… I mean, off