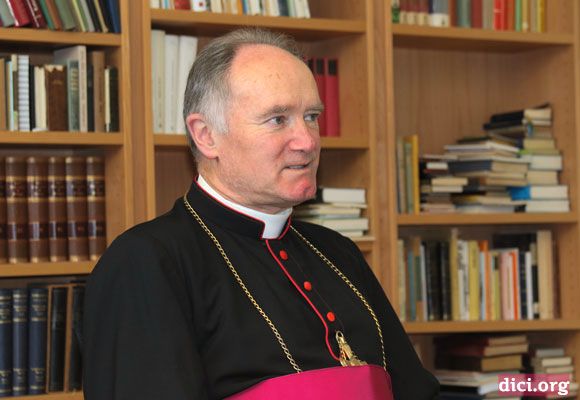 In what appears to be an attempt to clarify remarks made in a recent conference given by Bishop Alfonso de Galarreta concerning the relationship between Rome and the Society of St. Pius X, an interview of Superior General Bishop Bernard Fellay has just been published on the DICI website.

In the interview, Bishop Fellay addresses the following matters:

It’s a rather lengthy interview and should be read in its fullness there, but let it be said that those who humbly receive His Excellency’s words for what they plainly convey; avoiding the temptation to sin by speculating openly about hidden nefarious motives (in the manner of the so-called “resistance”) will find no indication whatsoever that Bishop Fellay is willing to “compromise” with Rome in exchange for canonical regularization.

On the contrary; Bishop Fellay gives us every reason to believe that he is determined to carry out the mission of the Society as described in Archbishop Lefebvre’s 1974 Declaration:

“We hold fast to all that has been believed and practiced in the faith, morals, liturgy, teaching of the catechism, formation of the priest and institution of the Church, by the Church of all time; to all these things as codified in those books which saw day before the Modernist influence of the Council.”

Among the noteworthy highlights of the interview, Bishop Fellay acknowledged that the Society does not trust Rome:

Now we still have this idea in the back of our minds, it is a rather widespread attitude: “If they want us, it is because they want to stifle us, and eventually to destroy us, to absorb us totally, to disintegrate us.” That is not an integration, that is disintegration! Obviously, as long as this idea prevails, we can’t expect anything.

Gaining what he called “some minimal trust” will take time, according to Bishop Fellay, but he does not say that such is utterly impossible short of Rome totally repenting of its modernism.

Even though such a pronouncement would earn the applause of certain of his detractors, it would be unreasonable for a number of reasons. For one, Archbishop Lefebvre never insisted upon such a thing as a prerequisite for an agreement with Rome.

As Bishop de Galarreta said in his conference:

‘You cannot admit the possibility of an agreement with Rome without being liberal.’ Such is not our position. It is important to repeat it: it was not Archbishop Lefebvre’s position. He signed a protocol for an agreement with Rome. And at that time, even when he broke it off after the protocol, the Archbishop said: ‘it is because the necessary conditions for our protection, for our survival, are not there.’ Because they wish to deceive us, because they do not wish to give us Tradition, because they wish to bring us over to Vatican II. It is because the conditions are not there. He said, ‘If they had granted me the conditions, the conditions I had requested, I would have signed.’ Archbishop Lefebvre said that after the consecration of the bishops. And he explained, ‘If I signed a protocol for an agreement, it was because there was nothing against the faith.’ Neither in the contents, nor in the act of signing. This is obvious. So we continue along these lines.

In other words, Archbishop Lefebvre insisted upon two things: First, and most obviously, he would never agree to anything that went against the Faith, and secondly, the Society must be sufficiently assured of its protection moving forward.

On the latter point, notice that he did not insist that such an assurance is impossible; representing an insurmountable stumbling block. This is Bishop Fellay’s position as well.

Perhaps more importantly as it concerns motives for engaging with Rome, Bishop Fellay spoke of the need to ask Our Lady to aid the Society in fidelity:

He concluded the interview saying:

Therefore ask the Good Lord to send graces that will win souls for Him, and collaborate in this work! In this way we will ask Him for many things. We ask Him that the Church might rediscover all the elements that make up her mission of saving souls. The one thing, the first thing, the only thing that matters for the Church is to save souls!

This, my friends, is the perspective of a true son of the Church, an authentic shepherd and dedicated father.

He is aware of bearing the full weight of a great responsibility, and he deserves our trust and our prayers.

The Lord has in some way entrusted to the Society, initially by way of its saintly founder, Archbishop Marcel Lefebvre, the task of both preserving the great treasure of the Church’s inheritance, and laboring to restore it, to the fullest extent possible, to its rightful place in the heart of the Church for the good of souls.

It’s a profoundly difficult task indeed. It would be far easier to simply hoard the treasure of the Church as its very own, as if the SSPX has somehow become the Church, but such is not the case.

The Adversary has corrupted the hearts and minds of many in the sacred hierarchy, even to the highest places in Rome, and he is determined to see the Society fail so as to succeed in dragging countless more souls to Hell.

Bishop Fellay is well aware of the scope of this battle, and he knows what it will take in order to prevail:

Let us ask for the triumph of the Blessed Virgin. She announced it. I would say that it is keeping us waiting, and we may even be a little impatient, especially when we see everything that is happening, which seems in contradiction to it. Yet this is not a contradiction; it is quite simply a development that the Good Lord permits, a frightening, terrible game: the lack of correspondence between human freedom, even among Christians, and what Heaven demands, the intention of Heaven declared at Fatima—in other words, God’s intention—to introduce into the hearts of Christians a devotion to the Immaculate Heart of Mary, which has so much trouble prevailing. However it is not so difficult; it is so beautiful, so consoling! And we see this major battle between the devil and the Good Lord, the battlefield being souls, the souls which God designed to be free and which He wants to win over, but not by force. He could have imposed His will majestically in such a way that all human beings would be prostrate—that’s what will happen at the end of the world, but it will be too late then. The battle must be waged now.

As I write, a contrary, earthbound narrative is emanating from Rome in the aftermath of the terrorist (read, Islamic) bombings in Brussels; one that stops short of addressing the true nature of the battle that is raging in our midst.

According to Vatican Radio, Pope Francis has sent a telegram to Jozef De Kesel, Archbishop of Mechelen-Brussels, which reads in part:

The Holy Father again condemns the blind violence which causes so much suffering and imploring from God the gift of peace, he entrusts on the bereaved families and the Belgians the benefit of divine blessings.

No, the tragic events in Brussels do not represent “blind violence” as much as they are the fruits of a false religion; one that rejects Jesus Christ, the Prince of Peace, and is at war with His Church.

Pope Francis, not unlike his predecessors, apparently does not care to acknowledge “what Heaven demands, the intention of Heaven declared at Fatima.”

Instead, he pays lip service to “imploring from God the gift of peace,” busying himself with planting trees, organizing soccer matches, and even going so far as to encourage Muslims to hold fast to their false religion and to cling to that blasphemous book of lies penned by the pedophile warmonger Muhammad at the Evil One’s urging.

Bishop Fellay gets right to the heart of the matter concerning the crisis in both the Church and the world when he says that we must ask for the triumph of the Blessed Virgin.

To that end, let us pray and fast for the conversion of Pope Francis this Holy Week, that he may come to embrace the extraordinary heritage which is the treasure of the Church, and will at long last carry out the simple requests made by Our Lady at Fatima, ushering in a profound period of conversion and peace.

The concupiscence of Christ