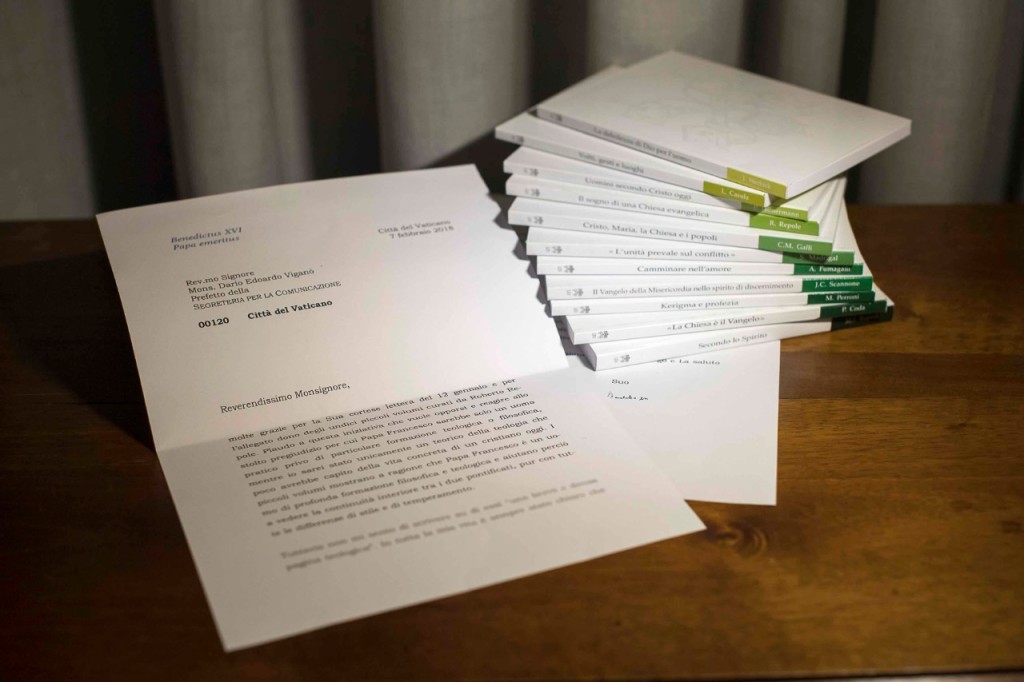 The Catholic world is all abuzz over a letter that was written (allegedly) by Benedict the Abdicator praising his successor (alleged) and declaring “interior continuity between the two pontificates.”

The text was written for inclusion in a series of books recently published by the Vatican Library entitled, “Theology of Pope Francis.”

The series, according to the letter, “rightly demonstrates that Pope Francis is a man of profound philosophical and theological formation.”

What shall we make of this? Is it real? Was it forced? Is it fake?

First, let’s be clear; Ratzinger is a modernist; a man whose own theological writings were such that he was held under “suspicion of heresy” by the Holy Office just half-a-dozen decades ago.

Sure, there are certain noteworthy aspects of the Bergoglian agenda that stand in stark opposition to Benedict’s pontificate. The first that comes to mind concerns the matter of Holy Communion for those who intent on persisting in adultery and fornication. Another would be their respective views of matters liturgical.

Even so, at the end of the day, both Ratzinger and Bergoglio are cut from the same conciliar cloth; a fabric woven of fundamentally flawed threads that one can easily discern as running through both of their “pontificates” (if you will allow).

This includes such things as an exaggerated reverence for man, a diminished image of Jesus Christ, and a distorted view of His Church and the mission that He gave to her.

Francis is pushing a theology of Mother Earth and a radical brand of environmentalism. He has decried “sins against creation” and has even gone so far as to pledge the Church’s support for United Nations sustainable development goals.

In 2008, Benedict addressed the United Nations, encouraging the body, saying:

Indeed, questions of security, development goals, reduction of local and global inequalities, protection of the environment, of resources and of the climate, require all international leaders to act jointly and to show a readiness to work in good faith, respecting the law, and promoting solidarity with the weakest regions of the planet.

My dear friends, God’s creation is one and it is good. The concerns for non-violence, sustainable development, justice and peace, and care for our environment are of vital importance for humanity.

Francis has accused traditional Catholics [sic] of being “Triumphalists” for daring to view Christ as King, saying that we envision “a more majestic resurrection than that of the real one.”

In the book, “Introduction to Christianity,” Ratizinger wrote opined:

It now becomes clear that the real heart of faith in the resurrection does not consist at all in the idea of the restoration of bodies, to which we have reduced it in our thinking; such is the case even though this is the pictorial image used throughout the Bible.

Francis, like all of the conciliarists, has apparently rejected the idea of a teaching Church that is charged with condemning errors after the example of, and with the authority of, Christ.

He has vehemently condemned proselytism, even going so far as to say that it is “solemn nonsense;” insisting that one need only do good works, as if this alone will somehow bring others to Christ:

The Church considers herself the disciple and missionary of this Love: missionary only insofar as she is a disciple, capable of being attracted constantly and with renewed wonder by the God who has loved us and who loves us first (cf. 1 Jn 4:10). The Church does not engage in proselytism. Instead, she grows by “attraction”: just as Christ “draws all to himself” by the power of his love, culminating in the sacrifice of the Cross, so the Church fulfils her mission to the extent that, in union with Christ, she accomplishes every one of her works in spiritual and practical imitation of the love of her Lord. [Emphasis in text published by the Holy See]

Presumably you get the point.

All of this tells me that it’s certainly not beyond belief that Benedict would consider the author of such timeless decrees as Laudato Si’ a “man of profound philosophical and theological formation.”

In other words, the letter could very well be real.

Could it be forced?

One may recall the comments that Benedict made in June 2016 during the celebration of the 65th anniversary of his ordination to the priesthood held in St. Peter’s Basilica.

We hope that you will be able to move forward with all of us on this path of Divine Mercy, showing the way of Jesus, to Jesus, to God.

These comments came less than three months after Amoris Laetitia laid out the Bergoglian path.

In 1994, as Prefect of the CDF, Benedict wrote of the Church’s bi-millennial practice concerning access to the sacraments for the divorced and remarried:

In fidelity to the words of Jesus Christ, the Church affirms that a new union cannot be recognised as valid if the preceding marriage was valid. If the divorced are remarried civilly, they find themselves in a situation that objectively contravenes God’s law.

Are we to believe that he had a change of heart and now believes that Francis is an oracle of mercy leading souls to Christ?

I’m not buying it.

What I suspect (and for good reason) is that Benedict is not free to express himself as he may wish. Heck, he’s not even free to go where he wishes to go!

Let us not forget another letter that Benedict somehow managed to place before the eyes of the world in 2014, in which he stated:

My state as a ‘cloistered monk’ does not allow me a presence that is also exterior. I leave my cloister only in particular cases, [when] personally invited by the Pope.

What part of his so-called “resignation” Declaratio even hinted at him choosing to be “cloistered” and in need of permission simply to move about?

The point is obvious, the letter could very well have been forced.

Could it be fake?

Please… This is the same Vatican that orchestrated the great deception concerning the Third Secret of Fatima in the year 2000 during the pontificate of John Paul the Great Ecumenist.

Oh, yeah, that reminds me… they also have make believe canonizations to their credit.

The letter could most certainly be fake.

In the end – be it real, forced, or fake – it really doesn’t matter one way or the other.

The only people who think for even a moment that Jorge Bergoglio is “a man of profound philosophical and theological formation,” are those who desperately want  to believe as much.

Up to this point, even his most devoted supporters have all but admitted that he is no such thing; preferring instead to paint him as a simple follower of Christ who wants to take the Church back to basics.

The Theology of Pope Francis series is obviously nothing more than a shameless and rather transparent attempt on the part of the Church’s enemies to give Bergoglio’s blasphemous and heretical agenda the appearance of Catholicity.

Pope Francis, the Divinization of Change, and the New World Order