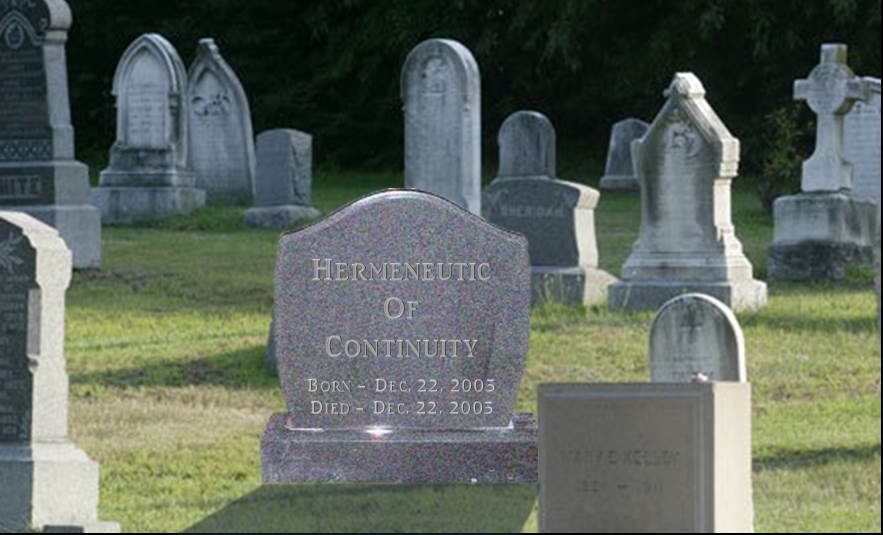 I was recently asked to comment on the theory that Benedict XVI, in these latter years of his life, has come to see the errs of his former, all-too-modernist, ways and is taking a turn in the direction of authentic tradition.

Where is the evidence for such a proposal? As far as I can tell, there simply isn’t any. In fact, as his face-to-face meeting with Christ the King draws ever nearer, all indications are that he is doubling down on his allegiance to the Council that effectively “dethroned” Him.

On January 15, the book co-authored by Benedict and Cardinal Sarah in defense of priestly celibacy (From the Depths of Our Hearts), the same that created such a stir in conciliar Rome over the past two weeks, was published.

The Society of St. Pius X, to its great credit, wasted no time in publishing a thorough, well written, review of Benedict’s contribution to the text.

According to the review (the writer of which is unnamed), Benedict wrote that he felt it necessary to “present the priest of the New Testament as one who meditates on the Word, and not as an artisan of worship.”

Make no mistake, when Ratzinger speaks of “an artisan of worship,” there is no other way for a Catholic to receive such a comment; he is referring to the most profound worship that mankind can possibly render to God, the Holy Sacrifice of the Mass, an action that is absolutely central to who the priest is in the very depths of his being.

Now, where would Benedict ever get the idea that the priest should principally be presented as one who “meditates on the Word” as opposed to (“and not as”) him who offers the true Sacrifice of the Cross, with the implication being that doing so represents a return to sources [hint, hint] in this case, the New Testament?

Well, from the Almighty Council, of course!

Since no one can be saved who does not first believe, priests, as co-workers with their bishops, have the primary duty of proclaiming the Gospel of God to all. (Decree on the Life and Ministry of Priests of Vatican II, Art. 4)

You see, it is the Council’s erroneous opinion (and evidently Ratzinger’s as well) that the priest’s “primary duty” is no longer to offer the propitiatory Sacrifice of the Mass for the benefit of both the living and the dead; rather, the conciliar priest (unlike the Catholic priest) is called to be more like his Protestant counterpart (albeit presumably celibate), a man best presented and understood as a proclaimer (and meditator upon) the Word.

This is just one example of how BXVI’s latest essay reveals his stubborn adherence to the utterly false and failed “hermeneutic of continuity” approach to Vatican Council II.

And where does such intransigence lead? The SSPX reviewer informs us:

The Pope-emeritus writes: “The crucifixion of Jesus is not in itself an act of worship.” The reason he gives is absurd: “The Roman soldiers who executed him are not priests. They carried out an execution; they absolutely did not think they were carrying out an act relating to worship.”

As the reviewer rightly states, “To deny that the Cross is an act of worship is incomprehensible.” Indeed it is! Unless, of course, the person stating as much is a fully committed member of the institution about which Archbishop Lefebvre rightly stated:

After describing the worship aspect of the Last Supper and denying that of the Cross, he writes: “In all this, there is never a direct question of the priesthood.”

In light of this, the reviewer points out:

Once again it goes against the holy Council of Trent which affirms (canon 2): “If anyone says that by these words: ‘Do this for a commemoration of me’ (Lk. 22:19; I Cor 11:24), Christ did not make the apostle priests, or did not ordain that they and other priests might offer His own Body and Blood: let him be anathema” (Dz. 949).

By all means, follow the hyperlink provided above and read the entire review. You might also forward it to any sincere persons you may know who are seriously considering wasting their money and time on the book, From the Depths of Our Hearts.

For those interested in a defense of priestly celibacy rooted in Catholic tradition, please see HERE.

The Joy of Abortion