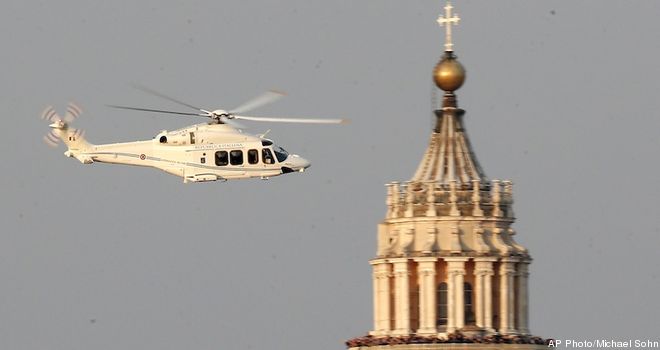 Benedict resigned freely. How do we know this? He said so himself.

In a recently published excerpt from his new book, Last Testament: In His Own Words, he said:

It was not a retirement made under the pressure of events or a flight made due to the incapacity to face them. No one tried to blackmail me. I would not have allowed it. If they had tried, I would not have gone because it is not right to leave when under pressure.

So there; that settles it.

Even so, just for fun, let’s apply some common sense and logic to this most unprecedented of situations.

Imagine, if you will, a hypothetical scenario wherein a reigning pope really does offer his resignation under pressure; i.e., the act is not freely made and therefore invalid.

Now, is this scenario too farfetched to even bother considering, as some might suggest?

Obviously not; in fact, the Code of Canon Law (332 §2) addresses precisely this possibility, and so we have to conclude that it is not too farfetched to consider.

– A reigning pope is threatened with an ultimatum; something like, “Either take your leave, or we will fill in the blank.”

– During the interview, he is asked whether or not he was blackmailed into resigning.

OK, now dust off your common sense and logic and tell me: What do you think this “former” pope is going to say?

There are only two possible ways of answering the question:

QUESTION: Does anyone in their right mind really believe that the “former” pope in such a scenario is going to give answer #1, thus inviting fill in the blank to make good on precisely the threat that caused him to flee in the first place?

Clearly, one would have to abandon common sense and logic entirely in order to believe that the answer is yes.

While one is left with nothing more than speculation when it comes filling in the blanks, the reality of the matter is simply this:

Reason alone tells us we cannot know for certain whether or not a papal resignation was forced based upon the words of the pope-resignee alone. (Cardinal Walter Brandmüller recently made precisely this point.)

Even so, I have no doubt that the majority of Catholics will consider the matter utterly and entirely settled; taking their rest in the illogical supposition, Benedict resigned freely, he said so himself.

To these I would propose the following:

If Benedict’s words tell us all that we need to know, then we must admit that all of his words have a story to tell; not just the ones that resonate with what we want to believe.

With this in mind, let’s consider what else Benedict had to say.

However, in today’s world, subject to so many rapid changes and shaken by questions of deep relevance for the life of faith, in order to govern the barque of Saint Peter and proclaim the Gospel, both strength of mind and body are necessary, strength which in the last few months, has deteriorated in me to the extent that I have had to recognize my incapacity to adequately fulfill the ministry entrusted to me.

So, he resigned because of what he considered his “incapacity” to face certain unnamed “questions of deep relevance” that were before the Church as he spoke – the same that needed to be “adequately” addressed by someone more capable “in order to govern the barque of Saint Peter.”

And yet, in his new book, he says:

“It was not a retirement made under the pressure of events or a flight made due to the incapacity to face them.”

Wait a minute? Did he resign “due to the incapacity to face” the unnamed “questions” before the Church such as they were in February 2013; in light of “the pressure” brought to bear by those then current “events” – or not?

Look, if you wish to hang your hat on Benedict’s words, by all means, have at it, but please don’t embarrass yourself by suggesting that his words put the matter to rest when, in fact, the exact opposite is true!

The man is plainly saying, I did not resign for the reasons I gave in the Declaratio.

If Benedict hasn’t raised enough red flags already, get this.

After having stated, “Practical governance is not my strong point and this is certainly a weakness,” Benedict went on to say of Francis:

He was an archbishop for a long time, he knows the trade. He was a superior of Jesuits and has the ability to put his hands to action in an organized way. I knew that this was not my strong point.

OK, so he knew that organized action wasn’t his strength. Fair enough, but doesn’t his manner of speaking suggest that he also knew for whom he was stepping aside; namely, this Jesuit who supposedly had just such an ability?

It sure sounds that way to me.

At another point, Benedict says of Bergoglio’s election:

No one expected him. I knew him, naturally, but I did not think of him. In this sense it was a big surprise. I did not think that he was in the select group of candidates.

Catholic journalist Paul Baade, who is very well known in the German speaking world and almost certainly by Ratzinger who claims to be a “newsy,” had written all the way back in 2005 about the St. Gallen’s group (or what Cardinal Danneels bragged about being a “mafia club”) that strove to place Jorge Bergoglio in the Chair of Peter.

Are we to believe that Benedict never heard of such a thing?

Furthermore, while it remains speculation, it has been widely reported that Jorge Bergoglio was the runner-up to Cardinal Ratzinger in the 2005 conclave. Heck, even George Weigel (who is rather close to Ratzinger) concedes that Bergoglio “took the silver medal” in that conclave.

And yet, Benedict is at pains to make us believe that the Argentinian Jesuit never crossed his mind in 2013?

The Pope Contemplatus doth protest too much, methinks, but you can decide for yourself.

Before you do, however, consider these perplexing words:

In fact, thanks to God, I was in a peaceful state of soul, of one who has overcome the difficulty — the state of soul in which you can tranquilly pass the helm to who comes next.

What exactly is “the difficulty” he needed to overcome?

Apparently, it wasn’t the difficulty of admitting his incapacity to face the Church’s issues as he once claimed; that he already confirmed. So what was it?

He doesn’t tell us, but what he does say is that he left the papacy, thus rendering the See of Rome vacant, only to be filled with the “big surprise” election of Jorge Bergoglio.

And yet, he speaks of tranquilly passing the helm to who comes next?

What really happened here: Did Benedict “pass the helm” to Jorge, or did the conclave pick a surprise successor?

Make of it what you will, but let’s be clear folks: Popes don’t “pass the helm” otherwise known as the papacy to anyone under any circumstances. Non e’ come la cosa nostra lavora – that’s not how this thing of ours works.

In conclusion, if you take anything at all away from this most recent round of contradictory nonsense and intrigue from the lips of the so-called “Pope Emeritus,” make it this:

Like it nor not, Benedict has plainly admitted that the reason he gave for resigning on 11 February 2013 is not the truth; i.e., he acted as he did for reasons he is either unwilling, or feels unable, to reveal.

If that strikes you as a resignation “made freely,” you may want to avoid operating heavy machinery and handling sharp objects.