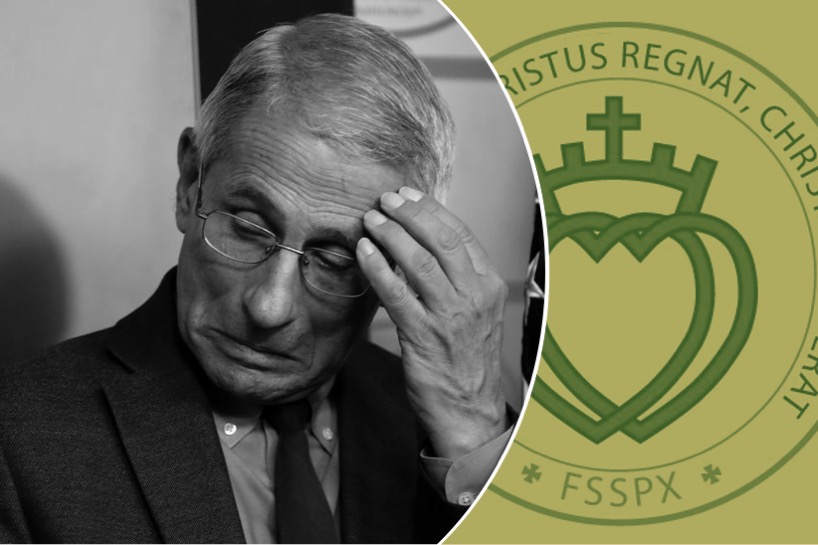 On November 19, the SSPX published an article entitled, Can a Catholic in Good Conscience Receive a Coronavirus Vaccine?

To say that the article is odd is a gross understatement; in the first place is the topic.

Over the past half-a-dozen or so years, I have been rather critical of the SSPX for failing to vigorously condemn the assorted blasphemies and heresies that have been flowing out of Rome like so much bilge, mainly from the pen and the mouth of Jorge Bergoglio (stage name “Francis”).

In response, any number of the Society’s defenders have suggested that drawing attention to, and correcting, these errors isn’t exactly within the scope of the SSPX’s raison d’être, which is to form holy priests and to preserve the traditional rites of the Roman Catholic Church.

And yet, curiously enough, the SSPX now finds itself moved to devote an entire article to the topic of COVID-19 vaccines. I find that peculiar from a priority standpoint, especially in light of the fact that the article seems to be ordered more toward convincing the faithful that they ought to receive the vaccine than addressing matters properly ethical, but let’s not get ahead of ourselves.

Adding to the oddity of the article is the fact that it has no author of record.

As such, one is left to wonder if it was written by a moral theologian whose credentials inspire trust, or by someone whose expertise (if any) lies in some unrelated field, like pharmacology. For all the reader knows, the article could have been written by a member of the Novus Ordo sect; in fact, there’s good reason to suspect that it was.

For example, throughout the article, the anonymous author invokes such phrases the Church speaks out, the Church says, the Church realizes, and the Church permits, ultimately concluding in its final two sentences:

The Church has provided steadfast, prudent guidance on this issue. As a result, Catholics have a firm foundation on which to stand in the morality of vaccines. [Emphasis in original]

And how exactly has the Church done so? The author tells us:

This question was well treated by the Pontifical Academy for Life, in a document approved by the Congregation for the Doctrine of the Faith, and dated June 9, 2005.

While it appears that the instruction offered in the Pontifical Academy for Life document is based on traditional principles (e.g., the distinction between formal and material cooperation), I find it disturbing that the SSPX writer is encouraging his readers to rely upon the judgment of the same institution about which Archbishop Lefebvre said:

This conciliar church is a schismatic church, because it breaks with the Catholic Church of all time. It has its new dogmas, its new priesthood, its new institutions, its new liturgy, already condemned by the Church in many official and definitive documents.

Here’s the point: The SSPX author could just as easily addressed the matter at hand by invoking longstanding principles founded upon traditional moral theology, apart from anything that may have come out of modernist Rome. Instead, he chose to cite its authority, as if this is where one’s confidence is well placed. Even if the writer isn’t Novus Ordo, his mentality certainly is.

With all of that said, let’s now turn to the oddest thing of all; namely, the content of the SSPX article.

In answer to the rhetorical questions – But are there any moral pitfalls in the vaccines? Do Catholics have a moral obligation to not accept these vaccines? – the SSPX writer treats the reader to some lessons in virology, immunology and microbiology.

Here, I will cite just a small sampling of the subject matter:

It is an mRNA (messenger RNA) vaccine, which is developed from the genetic code of the virus itself …  a stable mRNA molecule for a vaccine… our own cells turn it into a tiny portion of one of the virus’s proteins… allow[s] the body to learn to defend against it – providing immunity… mRNA vaccines, since they are synthetic, are quicker to develop… The cells used … called the 293T line… a similar cell line, Per.C6.

It’s enough to make one wonder if the ghostwriter is none other than Anthony Fauci!

Imagine, all of this from a Society that is, allegedly, laser focused on forming holy priests. One may be reminded of the green enviro-cyclical Laudo Si’, wherein the, ahem… “Holy Roman Pontiff” blathered on endlessly about “biodiversity, greenhouse gasses, the techno-economic paradigm” and the like.

Getting to the heart of the matter (that is, telling readers if they can, in good conscience, receive a Coronavirus vaccine), the writer begins by shooting down rumors that the two versions that appear most likely to become available the soonest (from Pfizer and Moderna) were derived from fetal cells.

He then goes on to give three pieces of advice to readers under the heading, “What Should a Faithful Catholic Do?” He writes:

If you’re expecting item #3 to address the “option” of refusing the vaccine altogether, you’re going to be disappointed; the writer never even considers as much.

Recall, however, that the SSPX writer thought it well to cite a 2005 document produced by the Pontifical Academy for Life. Interestingly, he left out of consideration the following proviso taken from that very text:

As regards the diseases against which there are no alternative vaccines which are available and ethically acceptable, it is right to abstain from using these vaccines if it can be done without causing children, and indirectly the population as a whole, to undergo significant risks to their health. However, if the latter are exposed to considerable dangers to their health, vaccines with moral problems pertaining to them may also be used on a temporary basis. [Emphasis added]

One notes that the SSPX writer ignores entirely the conditions articulated in the above citation; i.e., he seems rather pleased to operate under the assumption that COVID-19 does, in fact, represent a “considerable danger” to “the population as a whole.”

While that is the position being breathlessly broadcast by the FAKE news media on a daily basis, it is far from reality. Readily available statistical data indicate very plainly that only a very small, well-defined, segment of the population is at grave risk of severe illness, much less death, due to COVID-19.

Even so, the SSPX writer states, and without any qualification whatsoever:

In regards to vaccines or therapeutics developed synthetically or without fetal cells, the Church allows and promotes their use, in the same way that it promotes, encourages, and – yes – mandates her children to take care of their bodies with good food and medicines.

Add it all up and many readers will be left to imagine that the Church promotes, encourages and even mandates the COVID vaccine!

The author never even hints at, much less addresses, the possibility that an individual may have a whole host of good reasons – many having nothing to do with fetal cells – to refuse the COVID vaccine. He writes as if confident that his readers will dutifully line-up for inoculation once he gives them the green light.

In a sales situation, this is what is known as a presumptive close, and that is precisely the sense that one gets from this article; it’s a sales pitch and an aggressive one at that.

Just to make sure that so-called traditionalists (aka Catholics) really will feel compelled to roll up their sleeves for the injection, he adds in the article’s penultimate paragraph:

The arrogance and condescension is palpable, and it’s disgusting: Don’t be a heretic. Get the vaccine!

If all that has been said thus far isn’t disturbing enough, we now arrive at the writer’s third and final bit of advice as to what a faithful Catholic should do?

3. One should realize that in 2020 there may be no “escape” from vaccines and treatments (including those not for Coronavirus) that have their derivatives from fetal cells.  A strict “no fetal cell” position is likely impossible for anyone taking modern therapeutics.

Really, no escape? Who says we must partake of modern therapeutics such as the COVID vaccine, fetal cell derived or not?

So far, the U.S. government isn’t requiring citizens to receive a COVID vaccine, but if and when it does, one may very well expect the Society of St. Pius X and its ghostwriter, whomever he may be, to encourage the faithful to fall right in line.

Signs of the times