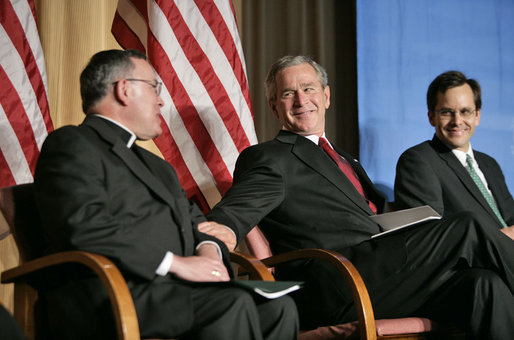 About the statement, Reno said:

As I expected, the leaders of the Catholic Church have done everything they can to avoid saying anything in response to the furor over the Indiana RFRA. Their counsel is “dialogue,” an unfortunate weasel word long used by administrators who don’t want to take a stand.

He alleges that the bishops are unwilling to take a stand because they wish to “avoid controversy” and will therefore “accommodate … whatever sexual regime dominates our society.”

On this note, he’s correct, but his conclusion is every bit as flawed as the statement he is criticizing:

What they should have done is patently obvious. We need religious leaders to denounce the hyperbolic propaganda for what it is and express unequivocal support for the Indiana RFRA. Such a statement would reflect a sober assessment of what best serves the common good and promises to protect, however imperfectly, the freedom of Christians (and Jews and Muslims and others) to teach, educate, and serve in accord with traditional moral teaching about sex, family, and marriage.

If he had, it would be clear to him that the Act has nothing to do with activities that are “in accord with traditional moral teaching;” it makes no such distinction.

The only measuring stick it proposes in order to determine what is protected and what is not is “compelling government interests” as determined by guess who; the government.

That said, Reno is at least faithful to his employer.

First Things was founded on the condemnable notion that the common good can be well served in a State that places the false religions of the world on an equal footing with the one true faith, as if religions that lead people away from Christ and His Church are as valuable to society as the Catholic faith.

When you get right down to it, there really is no such thing as “traditional moral teachings” properly speaking; there are only moral truths and misrepresentations of the same, and like it or not, the Lord has ordained but one voice in the world to teach humanity which ones are which, without error, in His name, and that’s the Holy Catholic Church.

Unless and until our bishops (including the one in Rome) are willing to say so, the LGBT movement will continue to dominate our society virtually unopposed.

Archbishop Charles Chaput of Philadelphia and Archbishop William E. Lori of Baltimore, along with a college professor and a couple of Baptists, recently co-signed their own statement concerning the Indiana RFRA.

Now Is the Time to Talk About Religious Liberty

For many religious believers, Passover and the Easter season are cornerstones of the year. Thus our hearts have been especially troubled in recent days by the acrimony and lies surrounding legal efforts, in Indiana and elsewhere, at ensuring religious liberty for people of all faiths.

As Americans commemorate their respective holy days, we urge all our fellow citizens to remember the moral roots of their constitutional system, and to engage in a sensible national conversation about religious liberty. Even those who are not religious have a stake in seeing that our “first freedom”—religious freedom; freedom of conscience—is protected in law.

In recent days we have heard claims that a belief central to Judaism, Christianity, and Islam—that we are created male and female, and that marriage unites these two basic expressions of humanity in a unique covenant—amounts to a form of bigotry. Such arguments only increase public confusion on a vitally important issue. When basic moral convictions and historic religious wisdom rooted in experience are deemed “discrimination,” our ability to achieve civic harmony, or even to reason clearly, is impossible.

America was founded on the idea that religious liberty matters because religious belief matters in a uniquely life-giving and powerful way. We need to take that birthright seriously, or we become a people alien to our own founding principles. Religious liberty is precisely what allows a pluralistic society to live together in peace. 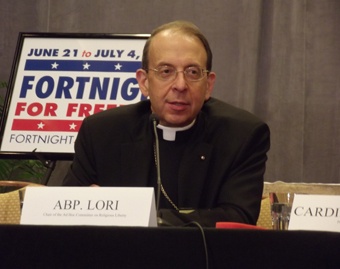 The vast majority of sincere Catholics today have no idea that the notion of “religious liberty for people of all faiths” – taken to mean that the Catholic, the Jew, the Muslim and others all have an equal right to believe and practice their faith as they wish – simply is not a Catholic concept.

The fact of the matter is, however, the Church has repeatedly condemned this error in no uncertain terms.

I doubt that this is the reason Archbishops Chaput and Lori didn’t claim recourse to Christ or His Church for their preposterous ideas, but it is noteworthy just the same who and what they do rely upon.

For instance, notice that they trumpet “basic moral convictions and historic religious wisdom rooted in experience.”

The Catholic, by contrast, would champion only those moral convictions rooted in Christ Jesus; the same that come to us from the Holy Catholic Church that teaches in His name.

Furthermore, Archbishops Chaput and Lori make no bones about their mission, saying, “we urge all our fellow citizens to remember the moral roots of their constitutional system.”

A Catholic who is truly committed to the mission that was given to the Church by Christ, on the other hand, would necessarily encourage others to embrace only that morality that is rooted in Our Blessed Lord, and this en route to entering the Church!

One also notes that rather than look to Christ for wisdom and light, Archbishops Chaput and Lori are pleased to cite Judaism, Christianity, and Islam.

Has it never occurred to these men that the overwhelming majority of self-identified Jews in this country believe that same-sex marriage is a ‘right” worthy of defending, and Muslims the world over are notorious polygamists?

What an embarrassment this statement is to the Church.

The reason Archbishops Chaput and Lori are unable to provide anything close to a Catholic exhortation is that they are cut from the same disintegrating cloth with which the problem they are addressing is cloaked; the American flag.

The two-edged sword of our age