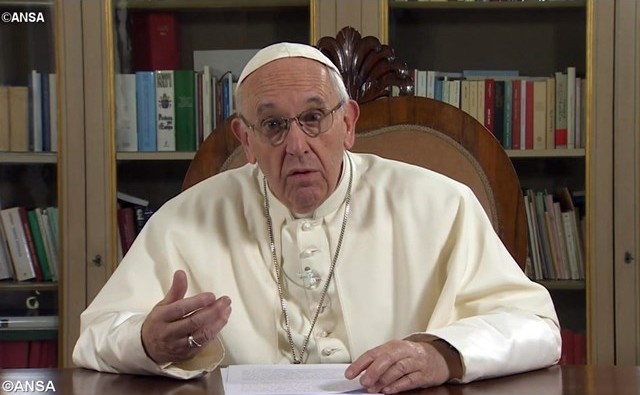 Francis, according to Vatican Radio, has sent a video message to the Italian Bishops’ Conference third International Symposium on Amoris Laetitia.

The theme of the Symposium tells us everything we need to know about it: The Gospel of Love between Conscience and Norm.

The “norm” (otherwise known as the Divine Law) is one thing; “conscience” (what fallen man tells himself) is another, and guess where “the Gospel of Love” is to be discovered and lived?

His Humbleness, for obvious reasons, begins his message by congratulating the bishops for their chosen theme.

Love between a man and a woman is obviously among the most generative human experiences; it is the leaven of a culture of encounter, and introduces to the present world an injection of sociality.

What a flowery load of meaningless garbage, or what I like to call pseudosacral homopoetic prose.

Getting to the heart of the matter, Francis reminds the bishops:

…in the journey of marital love and family life there are situations that require arduous choices, which must be made with rectitude.

Yes, so many arduous choices. As Shakespeare might put it:

To adulter, or not to adulter, that is the question. Whether ‘tis nobler to suffer the embarrassment of abstaining from Communion or the outrageous fortune of mortal sin…

The rest of the message is full of Bergoglianisms:

In the domestic reality…  Concrete knots… The concreteness of life…

According to the mind of Francis, the one thing that each of these has in common is that the “norm” (aka the Divine Law) does not always apply.

As for what does apply in such cases:

Just as one may have expected, in addition to quoting himself numerous times, Francis also quoted the Second Vatican Council as he elaborated on this “primacy of conscience”:

In the very depths of each one of us there is a place wherein the Mystery reveals itself, and illuminates the person, making the person the protagonist of his story. Conscience, as the II Vatican Council recalls, is this, “most secret core and sanctuary of a man. There he is alone with God, Whose voice echoes in his depths.” (GS 16)

To hear this faux-Catholic speak, one would think that God never uttered a peep about marriage and family, much less fornication and adultery.

Oh, he knows that Jesus spoke about such things.

The problem is, however, he thinks of Jesus as but a man. As I’ve written in this space any number of times, this is the Christological heresy underlying this entire “pontificate” – if you will pardon the expression.

Jesus points in particular to the medicine of mercy, which cures the hardness of the heart, restoring the relationship between husband and wife, and between parents and children.

The truth of the matter is, Francis desires that the entire Italian Bishops’ Conference (and those of very other region as well) adopt the same guidelines for implementing his Love Letter to Satan as those put in place in Rome and Buenos Aires; each of which discount the words of Our Lord and yet bear the Bergoglian stamp of approval.

If Francis were an honest man given to plainspokeness, he would say:

You have heard it said, “Every one who divorces his wife and marries another commits adultery, and he who marries a woman divorced from her husband commits adultery” (Luke 16:18), but Amen, Amen, I say to you, Amoris Laetitia!

But alas, he is not.