Home
Blog Post
It all comes down to the males 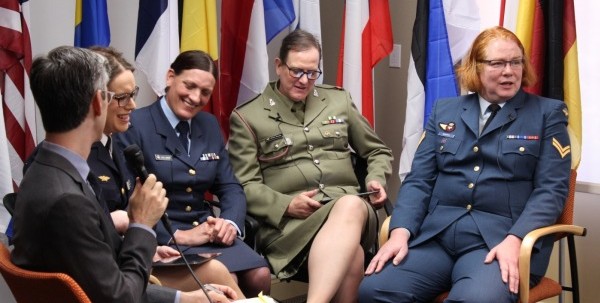 LGBT activists have been on quite a roll lately, haven’t they?

Over the last year or so, their efforts to see to it that gender-bending and homo deviance are not only accepted, but celebrated, have gained considerable momentum.

Their recent victories have been legislative (with so-called “gay marriage” becoming the law of the land in both Ireland and the United States), cultural (the tidal wave of applause for “Caitlyn” Jenner) and even ecclesial (the publication of a document by the Holy See lauding the “gifts and qualities that homosexuals have to offer to the Christian community.”)

The unfortunate reality is that the numbers of those who favor the LGBT cause (especially among the up and coming generation) have been growing to the point of a majority; the signs of the times are obvious and there’s no question in which direction this ship will continue to sail lest divine intervention alter its course.

While it’s obvious enough to faithful Catholics that the entire LGBT movement is nothing less than an act of open rebellion against God, one wonders why this particular form of depravity features so prominently in a society that boasts of a veritable smorgasbord of godless past times.

The reason that the LGBT agenda is so clearly coming to the fore may well be that we are fast approaching the last days.

What Sister Lucia told me: Final Confrontation between the Lord and Satan will be over Family and Marriage.

When reading these words, one immediately thinks of the upcoming Synod, which only lends credence to the claim that we are entering that pivotal moment in salvation history given that a crisis of faith in the Church herself is expected to accompany the final confrontation.

The question remains, however, why this particular battle?

In other words, could not one just as easily imagine that the final confrontation will be over abortion, or Islam, or naturalism, etc.?

Perhaps, but I would submit that a showdown over matters concerning marriage and family makes the most logical sense as its really nothing more than Satan’s nefarious war plan coming full circle – the battle ending up precisely where it began; its final front line long ago predetermined.

The Evil One tipped his hand all the way back in the Garden of Eden where he revealed that undermining human sexuality and gender as created by God (and therefore marriage and family) would form the very centerpiece of his unholy strategy for seeking the ruin of souls.

What’s more, it’s rather clear that attacking the male of the species has always been among Satan’s highest priorities; undermining maleness in such a way as to tempt men into rejecting the God-given attributes that define “masculinity.”

So, you want to read the signs of the times relative to the approaching final confrontation?

Keep an eye on the state of males both in the culture at large and in the Church – their strength, their manliness and their godliness – as you can be certain that this is precisely where Satan is determined to pile up the most casualties.

The result of Satan’s unrelenting attacks against manhood is exceedingly evident – not just in the most obvious cases, like the Caitlyn Jenners of the world – but in the plethora of men in our day who demonstrate a palpable lack of masculinity; e.g., timid husbands who are afraid to take the lead in making difficult (and not so difficult) family decisions, fathers who are too weak to discipline their own children, and men who are more inclined to shed tears than to offer a strong shoulder upon which to cry.

The degree to which individuals and families suffer under these circumstances is noteworthy. So too is the degree to which the children of the Church suffer when their spiritual fathers are weak, effeminate and indecisive; a topic that merits a treatment all its own.

For now, let us turn our attention back to the very beginning, to the Garden of Eden, where one discerns that the fate of the human family, in large measure, all comes down to the males…

According to the creation account recorded in the Book of Genesis, on the sixth day, God created humankind, male (Adam) first and then female (Eve) as his “helper.”

The Lord then commanded them to “increase and multiply,” to which end the Scriptures inform us, “A man shall leave his father and mother, and shall cleave to his wife: and they shall be two in one flesh.”

In the nuptial unity thus described, male and female together strike a particularly profound image of the Triune God – the Father whose eternal exchange of love with the Son is so superabundant as to be that from which the Holy Spirit, the Lord and giver of life, proceeds.

This is why the Evil One immediately focused his assault on the institutions of marriage and family.

You see, Satan cannot attack the Persons of the Blessed Trinity directly; he is powerless to corrupt that which is Divine. He knows this.

As such, he resorts to goading humankind into distorting the characteristics that are inherently appropriate to the genders as God created them; all in an attempt to corrupt the Divine image made visible as male and female become one flesh in the life giving bond of holy matrimony.

In other words, attacking marriage and family is the next best thing to attacking the Father, Son and Holy Ghost – the Devil’s primary target – and so it is that one might reasonably expect that this is precisely what the final confrontation will entail.

Satan’s desire to disrupt the natural order via an undermining of the genders is directed at both males and females, certainly, but it seems reasonable to consider that the Devil may indeed harbor an especially intense hatred for the male of the species for a number of good reasons.

The first and most obvious has to do with the basic principle of war that says, “Attack the head and the body will fall.”

As such, Adam’s primacy and the dominant role that the Lord had assigned to him in the order of creation was enough to place a target squarely on his back, as well as on the backs of every male to follow.

More noteworthy still is the fact that God’s plan of salvation is brought to fulfillment in the Person of Jesus Christ who is both truly God and truly male.

Ongoing motivation for this Satanic misandry (particular hatred of men), therefore, may logically be understood to perdure in light of the all-male priesthood that Jesus established in order to continue the work of Redemption through, with and in the Church.

Furthermore, one may also reasonably consider St. Paul’s exhortation in the Epistle to the Ephesians, “Husbands, love your wife as Christ loves the Church,” with the husband as a type of alter-Christus serving as yet more motivation for Satan’s ongoing disdain for masculinity, in particular as it is expressed in the context of marriage and family.

Is it just coincidence that, as a percentage of the population, more males than females identify as LGBT; that gay pride parades are overrun by homosexual males strutting their deviance, and the leading poster boys of the transgender movement at any given moment are almost invariably males?

Satan is no dummy. From day one his plan of attack has been predicated on the premise that when the male of the species falters, the rest of the human family is poised to tumble like dominoes. Like I said, it all comes down to the males.

Paradoxically, evidence of Satan’s anti-masculine agenda came to light the very moment he approached Eve in the Garden of Eden that he might tempt her into disobedience.

While one might initially assume that the events described in the Book of Genesis reflect the exact opposite of my thesis, it is perhaps more accurate to consider it a reflection of Satan’s well-calculated plan to undermine first and foremost the male primacy that God had established.

You see, engaging Adam as if he were head of the human family would be tantamount to abiding by the very same order that he sought to corrupt. In other words, playing by God’s rules isn’t exactly Satan’s way; in approaching Eve, he did the exact opposite.

One might also find it noteworthy that Scripture gives no indication that God had directly forbidden Eve to eat of the tree of the knowledge of good and evil. It’s reasonable, therefore, to believe that this Divine ordinance was only later relayed to Eve by Adam himself.

If that be the case, we might understand that Satan was not so much urging Eve to disobey God (not directly, in any case) as much as he was urging her to disobey her husband, and in so doing, subverting the very order that God had established.

More insight may also be gained by taking note of the fact that the serpent mentioned in Genesis 3 is not the harmless little garden snake seen in illustrated children’s Bible’s; rather, it is a creature that is far more imposing.

The original Hebrew text describes the serpent as nahash which means leviathan or something more akin to a sea monster.

One might reasonably wonder where Adam was when his wife, the “bone of his bone and flesh of his flesh,” was being engaged by this threatening beast.

Though Scripture doesn’t explicitly tell us, it is reasonable for us to believe that he may in fact have been right there in the midst of them; frozen, it would seem, in fear and in silence while Eve was left to her own devices to fence with the menacing tempter.

If so, it would seem that Adam had failed even prior to his eating of the forbidden fruit in the dereliction of masculine duty that God had entrusted to him, namely, “to keep” the garden; that is, to protect it and to keep it and its inhabitants (including, of course, Eve) safe in order to preserve the peace and the friendship that they enjoyed with God and with one another.

Before moving on, I’d like to briefly address the anticipated feminist objection to the assertion that Adam had been assigned the distinctly dominant role just described by pointing to the way in which God reprimanded him immediately after the Fall.

Notice that God does not upbraid Adam for disobeying the prohibition He had given against eating of the forbidden fruit; rather, He reprimands Adam for “hearkening to the voice of his wife” (cf Gen. 3:17).

This is a rather strong indication that Adam’s primary failure – the one that led to the deprivation of grace that henceforth afflicted the entire human family – was his unfaithfulness to the God-given requirements of his masculine identity; e.g., rather than leading his family, he followed his wife; instead of protecting and guarding her, he stood silent; rather than engaging the aggressor, he remained passive…

One might also take note of how other passages of Sacred Scripture assign primary blame for the Fall to Adam as opposed to Eve.

With all of this said, the million dollar question, as always, is now what?

While we may not have much control over the where’s and when’s of the final confrontation between Good and Evil, we have much to say about the battle for our own individual souls and the destiny of our families.

One of the best things that can be done to set such things aright is for men to behave like men, with women encouraging them in every way possible to that end, because like it or not, in many ways, it all comes down to the males.