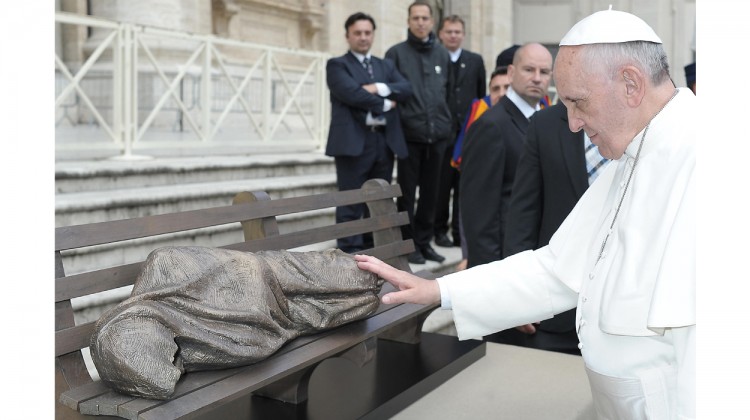 Above, we see Pope Francis blessing the statue named by its sculptor, “Homeless Jesus.”

It represents the only image of Jesus Christ that the worldly can accept:

A Jesus who is downtrodden and weak; a Jesus victimized by society’s ills, not unlike so many others.

Most importantly, the “Homeless Jesus” is silent; He renders no judgments and makes no demands beyond providing an image that provokes an earthbound sense of guilt within the “haves,” while simultaneously fanning the flames of class warfare within the “have nots.”

This is the Jesus of our current pope; the one after which he intends to remodel the Church.

It is the same Jesus described by Cardinal Oscar Rodríguez Maradiaga, the man Pope Francis personally chose to lead the group of cardinals advising him on the Curia’s reorganization, who said:

The function of the hierarchy is redefined in reference to Jesus as Suffering Servant, not as “Pantocrator” – lord and emperor of this world; only from the perspective of someone crucified by the powers of this world it is possible to found, and to explain, the authority of the Church. 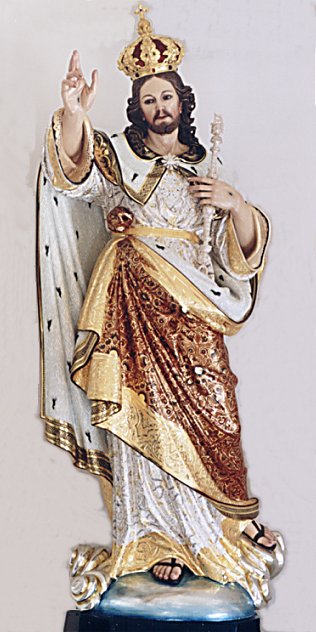 On the right, by contrast, is a statue of Christ the King.

It represents an image of Jesus Christ that the worldly find difficult to accept:

A Jesus who defeated death and is Risen unto Majesty; a Jesus who reigns victorious over all of society; a Jesus who possesses Kingly authority over individuals, families, and States, be they Catholic or otherwise.

Most importantly, and least acceptable to the men of this world, is the glorious reality that Christ the King speaks even today through the Holy Catholic Church; the same established by Him, endowed with the fullness of Divine Revelation, and granted the right to pass judgment on the personal and social obligations of humankind.

The deficiency of the “Homeless Jesus” image lies in the fact that it is, at best, a half-truth.

Our Blessed Lord told us:

Then the King will say to those at his right hand, ‘Come, O blessed of my Father, inherit the kingdom prepared for you from the foundation of the world; for I was hungry and you gave me food, I was thirsty and you gave me drink, I was a stranger and you welcomed me, I was naked and you clothed me, I was sick and you visited me, I was in prison and you came to me.’

In order for us to truly embrace this magnificent invitation to minister unto Our Lord in the person of our neighbor, it is necessary for us to see Jesus Christ as He truly is.

In the Scripture passage above – the same that is all-too-often misappropriated by those in the Church who focus almost exclusively on matters related to temporal poverty and social justice – note very well who it is that says, “as you did it to one of the least of these my brethren, you did it to me.”

It is the King!

The lesson should be clear:

It’s one thing to see Jesus Christ in the face of the homeless; it is quite another to see the weak and the downtrodden in Christ the King.

The former is an occasion of grace; the latter, a grave injustice that borders on Christological heresy.

Choose your images of Christ very carefully, my friends.

Romanitas: What’s in your sanctuary?