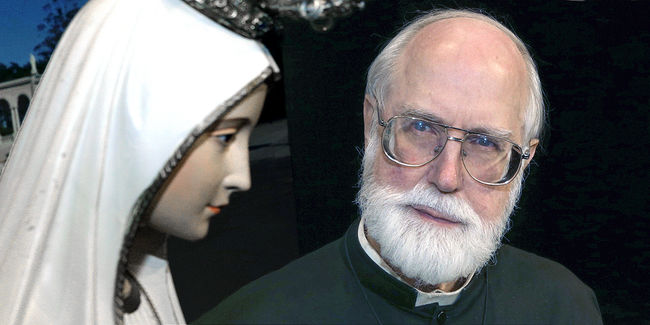 Catholic World Report has recently published an interview with Kevin Symonds, author of On the Third Part of the Secret of Fatima (En Route Books and Media, 2017).

Symonds, who is a friend of the World Apostolate of Fatima (the former Blue Army and “official” Vatican mouthpiece), debated Christopher Ferrara last month at the Angelus Press Conference.

I wasn’t present for the debate, but based on the content of the CWR interview, I am rather certain that Mr. Ferrara filleted his opponent’s arguments with ease.

In any case, I look forward to Mr. Ferrara’s response to the interview, which presumably will come soon since he and Fr. Gruner are mentioned in it often.

Here, I would like to offer my own commentary to certain noteworthy excerpts taken therefrom. [NOTE: For the sake of brevity, beyond that which is truly necessary, I will not provide extensive context for the excerpts under review here, and would urge readers to follow the link above to read the interview in its entirety.]

Commenting upon the widespread (and apparently growing) perception that the Third Secret has yet to be fully revealed, Symonds says:

Prior to Socci’s involvement, the main audience for Gruner and the Abbé were various “traditionalist” Catholics with some conspiratorial understandings of the third part of the secret. Socci expanded that audience to include a much larger swath of people.

While Antonio Socci is well known in Italy and perhaps other parts of Europe, he is largely unknown and has no particular “journalistic clout” in the English speaking world beyond those who have long since had “some conspiratorial understandings of the third part of the secret.”

The real reason interest in the Fatima message has been steadily growing (that is, even before the advent of the 100th anniversary) is the ever more obvious deteriorating condition of the Church following Vatican Council II; the same of which Our Lady came to forewarn us,  just as the “conspiratorialists” have been saying all along.

Today, thanks in part to Francis – the Generalissimo of the Council – that “much larger swath of people” includes no small number of neo-conservatives who are slowly but surely awakening from their slumber and coming to terms with the conciliar disaster and thus the message of Fatima.

This has very little to do with the laudable efforts of Antonio Socci.

The point here is obvious: For the likes of the WAF and the Captains of Newchurch in Rome, Vatican II is almighty and blameless, and so there must be another explanation for the growing ranks of Fatima conspiracy theorists.

Symonds went on to suggest that we, the sheeple, should simply trust in what the Vatican has officially stated.

Unfortunately, their concern [for the Church] led them to develop what I call in my book the “hermeneutic of suspicion and conspiracy,” meaning that they view ecclesiastical authority with suspicion and mistrust in matters pertaining to Fatima.

Even a disinterested secularist, who takes the time to read the Vatican’s official explanation of the Third Secret, cannot help but conclude that it isn’t trustworthy.

It’s not suspicion and mistrust; it’s common sense – a pope shot by single gunman and survives has little to do with the vision that was published:

A pope “killed by a group of soldiers who fired bullets and arrows at him, and in the same way there died one after another the other Bishops, Priests, men and women Religious, and various lay people of different ranks and positions.”

In fact, this is exactly what happened following its publication in the year 2000, as even the Washington Post editorialized that the Vatican’s story just doesn’t add up.

Symonds went on to say that this unfounded suspicion is what led Fr. Gruner and others to claim that there is a second, unpublished text relative to the Third Secret; one wherein Our Lady’s explanation of the vision is recorded.

As if to explain the absence of any such text, Symonds cites the 2013 biography of Sr. Lucia published by her religious order, the Carmelites of the convent of St. Teresa in Coimbra.

They revealed a previously unknown command of Our Lady to Sr. Lucia from January 3, 1944—that she was to “write what [her superiors] command you, but not that which is given to you to understand of its meaning.”

Apparently, there was some prophetic insight into the third part that had been given to Sr. Lucia by 1944 but which she was not allowed to communicate to others. This fact could account for why the text seemed “incomplete” to some people.

Symonds would have us believe that Our Lady, though she took care to explain the vision to Sr. Lucia, forbade the visionary to ever pass that explanation on to anyone else, much less in writing; as if she came from Heaven simply to present the Church and the world with an impossible riddle.

The very idea is absurd.

When asked in 1946 why Our Lady wished for the Secret to be read in 1960, Sr. Lucia said, because in that year it “will seem clearer.”

It was important to Our Lady that the meaning of the Secret be made clear.

Now you tell me: Given the benefit of hindsight, what exactly about the vision published by the Holy See was “clearer” in 1960 than it would have been in 1946, or 1956, or any other year prior?

No, Our Lady doesn’t deal in riddles. The explanation has almost certainly been committed to writing. A second text exists, and it has yet to be disclosed. I will have more to say on that topic in another post soon.

The interview then addresses a letter that Sr. Lucia allegedly wrote to Pope John Paul II in May 1982, a part of which was published by the Vatican along with the vision.

Symonds tells us that Mr. Ferrara, in their Angelus Conference debate, questioned the letter’s authenticity.

Readers may be interested in knowing that among the parts published by the Vatican is a portion wherein Sr. Lucia (again, allegedly) writes of the consequences of our failure to do as Our Lady requested:

If we do not reject the path of sin, hatred, revenge, injustice, violations of the rights of the human person, immorality and violence, etc.

Look, I don’t know for certain if these words really can be attributed to Sr. Lucia, much less if they accurately represent the words of Our Lady to the seer, but the phrase “violations of the rights of the human person” sticks out like a sore thumb leafing through the voluminous text of Vatican Council II.

I mean, seriously, are we really to believe that the pious Sr. Lucia, much less Our Lady, uttered not a peep about the Sovereign Rights of Our Lord Jesus Christ, and yet made an effort to bemoan the vaunted “rights of the human person”?

In any case, Symonds offers a most implausible commentary on the 1982 letter, saying:

Here, Symonds is referring to that part of the letter that states:

The third part of the secret, that you are so anxious to know, is a symbolic revelation…

According to Symonds, the rest of the letter offers an explanation of the vision that was published in the year 2000, which wouldn’t make sense, in his view, if the pope had already read the supposed second text.

But guess what makes even less sense?

This letter was allegedly written roughly one year after Pope John Paul II was shot!

Recall that the Vatican’s presentation of the Thrid Secret in the year 2000 stated:

When, after the attempted assassination on 13 May 1981, the Holy Father had the text of the third part of the “secret” brought to him, was it not inevitable that he should see in it his own fate?

If John Paul II understood the Secret to concern the attempt on his life in 1981, why, in the year 1982, would he still be “anxious to know” its meaning?

How is it that Sr. Lucia – she to whom Our Lady (as all agree) had explained the Secret’s true meaning – doesn’t mention the 1981 assassination attempt even once in connection with it?

Furthermore, why did it take another eighteen years for the Vatican to reveal that the attempt on John Paul’s life is the event described in the Secret?

The truth is folks, the 1982 letter doesn’t make sense because it is a fabrication; not because a second text does not exist.

The interview concludes as Symonds relates how he had read the first page of an unpublished and undated letter that Sr. Lucia had written to Paul VI:

In her letter, Sr. Lucia spoke about a “diabolical revolt” that was being “promoted by the powers of darkness” with “errors” being made against God, his Church, her doctrines and dogmas. She said the Church was going through an “agony in Gethsemane” and that there was a “worldwide disorientation that is martyring the Church.” She wrote to encourage Paul VI as the Vicar of Christ on earth and to tell him of her and others’ steadfastness to him, to Christ and his Church, in the midst of the revolt.

While we do not know the date of this letter, it was in the year 1972 that Paul VI made his famous comment concerning the “smoke of Satan,” wherein he made plain his own understanding of the “diabolical revolt” taking place in the Church.

[NOTE: The Holy See website has a secondhand account of this homily, in Italian, with quotes attributed to Paul VI.]

We believe in something preternatural coming into the world [the Devil] precisely to disturb, to suffocate anything of the Ecumenical Council, and to prevent the Church from blossoming in the joy of having regained full consciousness of Herself.

Are we to believe (as Symonds and the WAF would most certainly desire) that Sr. Lucia – Our Lady’s chosen visionary – wrote to Paul VI to encourage him to press forward with the conciliar agenda in spite of those who (like Cardinal Ottaviani and Archbishop Marcel Lefebvre) “revolted” in the face of the anthropocentric Novus Ordo Missae, the ecumenical agenda, the veritable dethronement of Christ the King, and the unbridled humanism that characterized his entire pontificate?

Once again, I’m not buying it.

In closing, and returning where we began, those who are immersed in unchanging Catholic doctrine as taught with great clarity and conviction before Vatican Council II cannot but realize that the men who speak in the name of the Church today – up to and including the men in white in Rome – simply cannot be trusted to teach the truths of the Faith.

So why should they be trusted to tell the truth about Fatima?

Before the cock crows…