Home
Blog Post
What ever happened to the call to conversion? 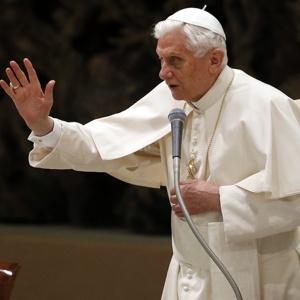 It’s always a risky proposition to suggest that “the emperor’s clothes are in some way lacking,” but to do so when he is much beloved and has just announced his impending abdication, well… that’s just asking for a knee jerk rebuke from the sentimental masses.

Be that as it may, while I love and admire much about Pope Benedict XVI, and will be eternally grateful to him for Summorum Pontificum, there are some things about this Holy Father’s pontificate that I most certainly will not miss; among them, the way in which he (like his predecessor) has been pleased to impart to non-Catholics and their religions a dignity they simply do not possess, as if doing so is anything other than an invitation to grave error.

Case in point, in his audience of today, His Holiness said, in part:

While the Lord continues to raise up examples of radical conversion, like Pavel Florensky, Etty Hillesum and Dorothy Day, he also constantly challenges those who have been raised in the faith to deeper conversion.

The first two examples of “radical conversion” (allegedly “raised up” by the Lord Himself) are non-Catholics, one a Russian Orthodox (who denied the authority vested in the Vicar of Christ), the other a Jew (who denied Jesus Christ!); both of whom died outside of the Catholic Church (baptism of desire notwithstanding).

Perhaps the writings and experiences of these figures may be of some value to those already well grounded in the faith (and one cannot but recognize how few who call themselves “Catholic” truly are), but surely there must be countless other, far better, examples of “radical conversion” the Holy Father could have offered for the world’s consideration; especially at this time when indifferentism is running rampant and global attention to his every word and gesture is swelling daily in anticipation of February 28th.

So, what is one to make of the pope’s words? Is it truly a Catholic thought to maintain that the Lord “raises up” individuals who reject His Son and deny His Church? Are we further to believe that He does this so that they might serve the world as shining examples of what “radical conversion” looks like? Certainly not, and yet that is precisely what the Holy Father’s comments indicate.

Given the understandably warm feelings that all of us have for the Holy Father in these highly unusual days leading up to his departure, many will simply refuse to even consider how dangerous these kinds of comments are, and the degree to which they stand at odds with the very mission of the Church.  Others will choose to dismiss any and all concern, thinking to themselves, “Of course he didn’t mean to imply that,” as if the person speaking was Fr. Bob in a casual chat at the local coffee shop and not the Vicar of Christ whose well prepared text is disseminated globally almost instantly.

I’m not the only person whose ears perked up upon hearing this message. Dr. Robert Moynihan, founding publisher of Inside the Vatican Magazine, wrote from Rome, “Benedict’s choice of these three, from a certain perspective, could not have been more provocative…” (Dr. Moynihan’s emphasis)

The take away from this is simple but bitter; the realities of Catholic life in our day are such that we can no longer consume with abandon, like a babe at the breast, every religious proposition that comes to us even from the highest places in the Holy See; rather, we must scrutinize and measure all that is proposed against the Faith that comes to us from the Apostles, because clearly, not all of it is good food for the soul.

Oh how I long to see a man elevated to the Chair of St. Peter who is willing to speak plainly of the deficiencies of non-Catholic religions, and likewise of the utterly unique glory of the Holy Roman Catholic Church, boasting not of himself but of the Lord, calling those outside of the fold to embrace the one true religion.

After all, isn’t that what Jesus commissioned His Church to do?

Is the “formal act of correction” off the table?