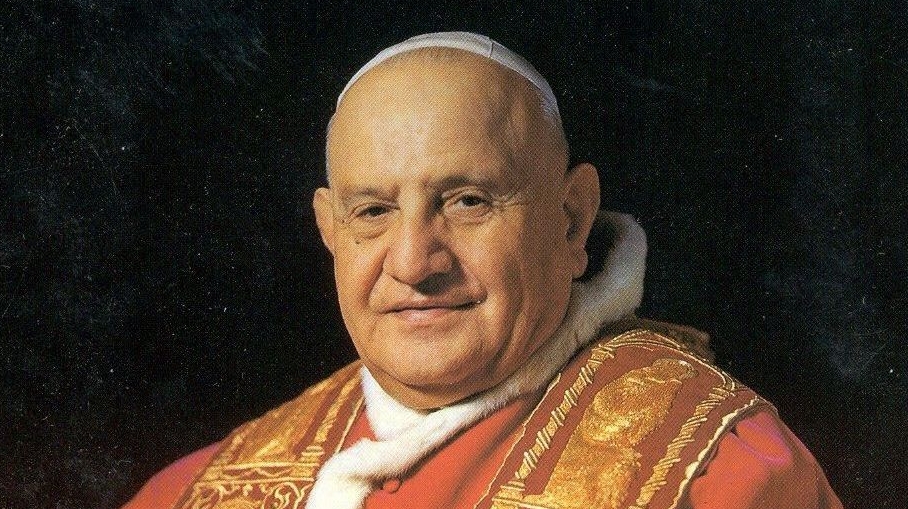 According to the liturgical calendar of the Traditional Roman Rite, today is Pentecost Monday, the day after Pentecost Sunday.

On the Novus Ordo calendar, however, today constitutes the beginning of “Ordinary Time” – a specific period of weeks unique to what might best be considered “our time.”

Though “Ordinary Time” also follows Pentecost in a chronological sense, spiritually it is rooted not so much in the birth of the Catholic Church and the descent of the Holy Ghost, but rather in the “New Pentecost” that gave birth to a new church at Vatican Council II.

The phrase “New Pentecost” can be traced back to the Apostolic Constitution, Humanae Salutis, wherein Pope John XXIII formally convoked the Second Vatican Council, praying to the Holy Ghost:

“Divine Spirit, renew your wonders in our time, as though for a New Pentecost…”

In 1961 as Pope John XXIII offered this prayer, roughly 22 months had passed since he had read the Third secret of Fatima.

Among those who also read the as yet unrevealed Secret was Cardinal Mario Luigi Ciappi, personal theologian to Pope Pius XII, John XXIII and their next three successors.

“In the Third Secret, it is foretold, among other things, that the Great Apostasy in the Church begins at the top.”

So, how did Pope John XXIII, the man who occupied “the top” of the Catholic Church on earth at that very moment react to this message?

He reportedly remarked, “This message is not for our time.”

You see, for John XXIII, “our time” was that time when men, even within the Church, had grown so restless in their pursuit of worldly acclaim in the name of so-called “progress” that they desired to ignite a New Pentecost, and the pope himself would provide the spark in the calling of the Council.

“Renew your wonders in our time, as though for a New Pentecost…”

So, how will future generations look back upon our time?

It seems to me that they will look back on the conciliar age as that regrettable time in human history when even our churchmen became drunk on self-adulation; so captivated by their own accomplishments and so thoroughly convinced of their soaring dignity that they embraced the delusion that “all things on earth should be related to man as their center and crown.” (Vatican Council II, Gaudium et Spes)

This, my friends, is the “our time” of which Pope John XXIII spoke.

The Latin phrase for “our time” is Nostra Aetate, the name given to the Declaration on the Relation of the Church to the Non-Christian Religions of Vatican II; a document wherein it is exceedingly clear that this Council ended up being precisely what John XXIII had hoped that it would be:

A “New Pentecost” – the birth of a new church; one quite unlike the Holy Catholic Church.

This phrase “New Pentecost” strikes me as the arrogance of Satan on display.

Sure, he is the most subtle of all creatures, but he is also prideful to the point where he cannot help but flaunt his evil.

Knowing that his time is short, one can almost imagine him bragging before the Lord as if to say:

You had your Pentecost. Watch as I tempt your vicar to invoke a new one. One that will give birth to a new church wherein man, not you, but man is king. Just you wait and see!

At the first and only true Pentecost, St. Peter, our first pope, boldly evangelized the Jews; calling upon them loudly and clearly:

“Repent, and be baptized … every one of you … in the name of Jesus Christ for the forgiveness of your sins!”

Following the New Pentecost, the one that John XXIII envisioned for our time, we find, just as we might expect, something entirely different.

Rather than calling upon the Jews to come to the waters of baptism that they might be saved, the Council, in the document Nostra Aetate, even goes so far as to misappropriate St. Paul’s Epistle to the Ephesians in order to suggest that the Jews in our time – a people who plainly reject Jesus Christ – have been made one with us by His Cross!

With this in mind, the leaders of the new church see no need for the Jews, or anyone else for that matter, to renounce their errors and embrace the Holy Catholic faith.

At the heart of the “New Pentecost” that inaugurated our time, as I suggested in Satan’s hypothetical boast before the Lord, is the dethronement of Christ the King and the virtual enthronement of man in His place.

By contrast, exhorting the Jews at the real Pentecost, St. Peter proclaimed the Kingship of Christ, saying:

“Brethren, let me freely speak to you of the patriarch David … He was a prophet and knew that God had sworn to him an oath … that of the fruit of his loins one should sit upon his throne.”

He then proclaimed the identity of this King whose reign is everlasting, saying:

“Let all the house of Israel know most certainly that God hath made both Lord and Christ, this same Jesus, whom you have crucified.”

This event is so familiar to us that we sometimes fail to fully appreciate its magnitude.

Roughly seven weeks earlier, Pilate had assented to the Jews’ demands for the crucifixion of Our Lord, at least in part, for fear of an uprising as the population of Judea over which he governed had swelled many times over with Jews there to celebrate the Passover.

When they were stirred up against Jesus, Pilate chose the most expedient solution.

And yet, what did the Apostles do on Pentecost?

Even though they presumably knew that Pilate would be on high alert for any potential uprising that might be instigated by the followers of Jesus, they went out among the crowds, the population of Judea once again swollen with Jews who had come from all over to celebrate Shavuot – the Feast of First Fruits – and they proclaimed the Kingship of Christ; calling the Jews to conversion!

Following the “New Pentecost,” the voice of those who presume to speak in the name of the Church dare not call anyone to conversion.

Rather, they look to the practitioners of the false religions and encourage them to persist in their errors.

The churchmen of our time even go so far as to insist that men have a natural right, not only to practice their false religions in private, but to disseminate their errors in public; i.e., they openly encourage mutiny against the King once preached by St. Peter!

This too is a direct fruit of the “New Pentecost;” specifically, the Second Vatican Council’s Declaration on Religious Liberty, Dignitatis Humanae.

As readers of this space know very well, the Church is in crisis.

What some may not know is that the problem, properly speaking, isn’t Francis. He is an especially nasty symptom, but he isn’t the disease.

You see, Francis is the first “pope” to come of age in our time; the first whose seminary experience was shaped exclusively by Vatican II and its narcissistic fixation on man.

Unless and until the decrees produced by this Council are looked upon and rejected for what they truly are – the founding documents of a new church, born of a New Pentecost, boasting even of a New Mass and a new calendar – the crisis that has come to define our time will most certainly go on.

The Pope’s Interview: A Preface