Home
Blog Post
Voris and Whiners and Posers, oh my! 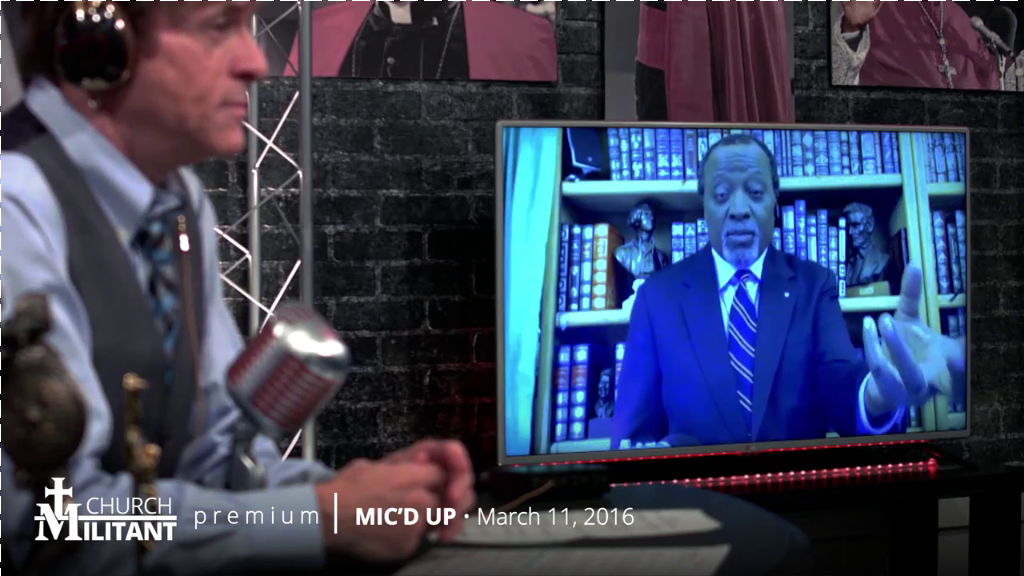 My old pal Michael Voris recently had Dr. Alan Keyes on his Mic’d Up program to discuss the disillusionment of so-called “conservative” American voters, but the segment revealed something far more important than this…

My old pal Michael Voris recently had Dr. Alan Keyes on his Mic’d Up program to discuss the state of the Republican Party in the United States, and the disillusionment of so-called “conservative” voters.

In a “free” video clip provided by CMTV (presumably as an inducement to pay for access to the complete interview) Dr. Keyes, who is widely considered a “traditional Catholic,” described the deceptiveness of the Republican Party as follows:

VIDEO / DR. KEYES: “They have a platform, it sounds fine; it’s supposed to be pro-life and in other areas it’s supposed to respect the basic tenets of respect for unalienable rights, religious liberty, other things. But then, when push comes to shove, they are funding and passing and tolerating all the things that are breaking down the constraints that constitutionally should keep government from getting involved with the promotion of evil and injustice in our society…”

OK, let’s stop here. For the “traditionalist” – aka Catholic – a couple of red flags come into view:

First, Dr. Keyes speaks of religious liberty – meaning, the American pluralistic model, wherein the truth that comes to us from Jesus Christ through His Holy Catholic Church is treated by the government as if it is just one more opinion among many; an opinion of arguably no more value to society than the many falsehoods that are disseminated by the Muhammedans, the Wiccans, and the heathens.

Dr. Keyes speaks as if this brand of religious liberty somehow belongs in the same category as the right to life and “other unalienable rights” that are proper to the human person. His is a decidedly American view, but it also happens to be the view adopted by the Second Vatican Council in the document Dignitatis Huamane, which reminds me:

Back in the day, Voris had me on his program as well. In fact, the last time I was there in studio, as I recall, we discussed the Council’s stark departure from immutable Catholic tradition with respect to the matter of religious liberty, and Michael had no problem recognizing it and the dangers involved in placing false religions on the same level as the one true faith.

Don’t waste your time trying to find the video, even if you’re one of their “premium subscribers.”

This video, and many others like it, have all been deleted. Apparently, the traditional doctrine of the Holy Catholic Church is no longer welcome at CMTV; much less is anything that comes close to exposing the Council’s errors.

In any case, getting back to Dr. Keyes: He mentions “the constraints that constitutionally should keep government from getting involved with the promotion of evil and injustice in our society…”

Look, Michael Voris is a news man. I wonder if he asked Dr. Keyes the obvious question that this statement clearly invites; namely, exactly how does the Constitution of the United States in any way so constrain the government?

It’s an important question, especially for Americans; American Catholics in particular, and posed another way we might ask:

How does the U.S. Constitution go about defining “evil” and “injustice” so as to limit the government’s involvement in such things?

Now, I’m no Constitutional scholar like Dr. Alan Keyes, but I can tell you that government of the United States isn’t founded upon any such objective principle as these. To quote the Declaration of Independence, this nation is founded upon the idea that man enjoys certain “unalienable Rights, that among these are Life, Liberty and the pursuit of Happiness.”

Sounds so far so good, but then it goes on to say “That to secure these rights, Governments are instituted among Men, deriving their just powers from the consent of the governed.”

In other words, in these United States, at least insofar as her founding documents are concerned, the power to define what is evil and what is good, what is unjust and what is just, belongs not to Jesus Christ who is truth incarnate, but to the people.

Dr. Keyes seems to understand, and even embrace the idea.

VIDEO / DR. KEYES: “As a result, the Republican Party has been of no use; it’s been worse than of no use, because it absorbs votes, but it doesn’t deliver what the people casting those votes believe is necessary for the country’s future…”

Let me make sure I have this straight. So, according to Dr. Keyes, the Republican Party is blameworthy for failing to do what the people casting votes believe to be necessary?

Seriously? How much further must society descend into the depths of depravity before neo-conservative American Catholics come to realize that it does not matter one whit what the people casting votes believe to be  necessary for the country’s future …

What really matters is what Our Blessed Lord knows to be necessary for a just society wherein men are capable of attaining toward the end for which they were created.

VIDEO / DR. KEYES: “That is why the prudent Jesus Christ, the wise Jesus Christ told us to look to God’s not to some relative imperfection of human beings to determine what we should be working for when it comes to justice, because that’s the key thing … You’ve gotta consult the standard of God and then do what is right by God, and if you don’t, you’re going to progressively go farther and farther down the path toward evil, which is what is happening in our politics.”

On the one hand, Dr. Keyes speaks as if the Republican Party is failing us because it isn’t carrying out the desires of the electorate.

On the other hand, he says that we must look not to the imperfections of human beings for guidance in our civil affairs, but rather to the standard of God as he calls it.

So, which is it? Are we to be guided by the whims of the electorate, or by the standard of God?

Now, don’t get me wrong, I take Dr. Keyes at his word that, as a so-called “traditional Catholic” he recognizes the primacy of God’s standard, but what this illustrates very well is the degree to which the defender of the U.S. Constitution, and would-be traditional Catholic, is a person conflicted.

So much so, in fact, that one cannot be both.

The question that needs to be asked here is obvious: How do both voters and elected officials come to know the standard of God?

To use Dr. Keyes words – the prudent Jesus Christ, the wise Jesus Christ established a Church; He established the Holy Catholic Church, and invested it with the authority to teach in His name.

But according to the Constitution – this Church, her teachings, and her followers, deserve no more consideration than any other constituency.

That means we have a choice folks: Either we can be true soldiers for Christ in the Church Militant as traditional Catholic defenders of immutable truth, or we can be defenders of the U.S. Constitution and by extension the Second Vatican Council.

Make no mistake about it; you cannot be both.

A few weeks ago, I made the same case with respect to Justice Antonin Scalia given that obituaries were widely hailing him as a “staunch traditional Catholic defender of the Constitution.”

Setting the record straight and pointing out the glaring contradiction in this case invited the criticism of certain self–described “traditional” Catholic media members who whined about how insensitive it was to speak the truth so soon after Scalia’s death – as if it charity somehow demanded that we who know better sit back and allow unsuspecting readers to be deceived, at least until some undefined waiting period has passed presumably.

Well, perhaps you’ve noticed: Antonin Scalia died over a month ago, and yet, these whiners who pose as dependable defenders of Catholic tradition have remained silent; content to allow the lie that one can be both a staunch defender of the U.S. Constitution and a devout traditional Catholic to go unchallenged.

Only they can say, but either way, the lesson is clear:

When it comes to so-called “traditional” Catholic media outlets, be careful what you watch, what you read and who you support. Scrutinize everything.

Clearly, there are those who pose as “defenders of tradition” whose priorities lie not so much in building the Kingdom of Christ as in building their own little brand.