Home
Blog Post
Voris and the SSPX: An unholy obsession 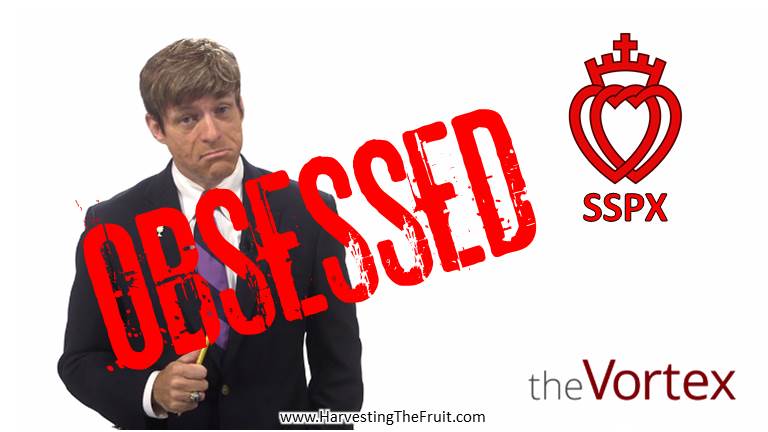 Michael Voris and CMTV, along with their puppet master money man, are positively obsessed with the Society of St. Pius X. Enough already.

Consider very carefully which efforts deserve your financial support; limiting it to those that have as their singular mission seeking the truth and standing up in defense of Catholic tradition. CLICK HERE TO DONATE NOW.

Church Militant.tv and Michael Voris and their puppet master money man are positively obssessed; obsessed with slandering at every turn the Society of St. Pius X.

Bishop Athanasius Schneider – a man Michael Voris has interviewed and relied upon many times as a credible source of insight on the crisis effecting the Catholic Church – recently visited two SSPX seminaries as a legate of the Holy See and came away with nothing but praise.

He even went so far as to say, and I quote:

“To my knowledge there are no weighty reasons in order to deny the clergy and faithful of the SSPX the official canonical recognition, meanwhile they should be accepted as they are.”

Did you get that? This being the case, it’s no wonder he never even hinted at the ridiculous notion that this group – who he believes should be accepted as they are – is in schism, formal or otherwise.

So what does Voris do?

He seeks clarification from Bishop Schneider, whose response made it crystal clear that allegations of schism have no part in this conversation.

Being obsessed with an irrational hatred for the Society – one that may have originated in the checkbook of his benefactor but now belongs entirely to him as well – Voris went back to attacking the SSPX; misrepresenting His Excellency’s words and labeling those good Catholics who are sympathetic to the Society and their positions as, “those who support schism.”

Two days ago, Pope Francis decreed that the priests of the SSPX are given the jurisdiction to hear confessions and to offer absolution validly and licitly during the Year of Mercy.

As my friend Chris Ferrara said:

“Popes don’t grant to schismatics universal power to absolve the sins of the Catholic faithful.”

So, how did CMTV react?

By firing off yet another round of accusations of schism.

It’s sad, really. At one time I had nothing but respect for Michael Voris and the work he was doing. I called him “friend,” and I still have high hopes that he’ll return to being what he once was … but things have changed and changed drastically.

At one time, CMTV was determined to uncover the truth and to “expose lies and falsehoods.”

Now, unfortunately, they are so overcome with some unholy obsession that they think nothing of telling their own lies and falsehoods – over and over and over again – about a group whose only crime is to believe and to behave as Catholics have always behaved and believed.

So, why not just ignore these people?

“Not to oppose error, is to approve it, and not to defend truth is to suppress it, and indeed to neglect to confound evil men, when we can do it, is no less a sin than to encourage them.”

In addition to that, CMTV is misleading God only knows how many souls.

Look, I’ve never been one to beat around the bush so I’ll get right to it.

Over the last week, I’ve heard from any number of current and former CMTV subscribers who either have, or are seriously considering, canceling their subscription.

More than one has made it a point of telling me that they withdrew their support from CMTV so they could redirect that support to the Harvesting the Fruit blog. I’m humbled by that.

If you’re a current subscriber to CMTV and you’re growing weary of their unhealthy fixation on the Society of St. Pius X, when God knows that they and those who sympathize with them are not the problem in the Church today …

If you’re finding their refusal to directly engage the incredibly dangerous words and deeds of Pope Francis – a Roman Pontiff who, incidentally, is about to preside over a Synod of Bishops that he is charging with finding ways to change that which every Catholic knows is unchangeable – if you’re finding that position increasingly untenable; to the point of falling right into the trap of which Pope St. Felix warned when he said: “Not to oppose error, is to approve it…”

Then please consider joining those who have chosen to redirect their support to the Harvesting the Fruit of Vatican II blog.

We don’t have “premium” members here. Everyone – from the silent casual reader to the most prolific commenter and everyone in between is equally as important in what we’re doing.

We also don’t have the luxury of a state of the art studio, a building out of which to operate, or a wealthy benefactor to pay our bills; much less tell us what song sheet we’re obligated to sing from.

In fact, I’m making this video on my iPhone right now; I’ll edit it with some free program I found online and then upload it myself on my laptop later…

What we do have, however, is an obsession of our own.

Speaking for myself, I may not always get it right, but I can promise you this:

Fr. Jose Miguel Marques Campo and I are obsessed with opposing error, defending truth and confounding evil men whenever and however we can no matter the cost.

And believe me, doing so does indeed come at a cost; one that extends well beyond dollars and cents.

So, if you can help us continue this effort financially, please do. We very much need it and will your kindness will be greatly appreciated.

Share this video far and wide and invite your friends to visit the blog to have their eyes opened.

Thank you for your kind support.

Saying, “I was wrong”

Some secrets are meant to be shared