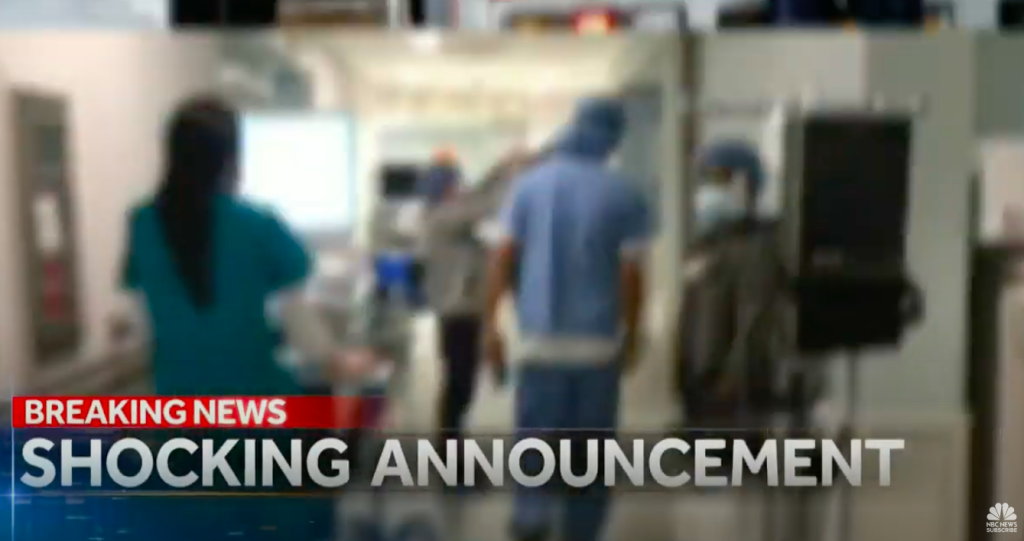 If, however, you happen to be a misery-loving leftist, that news ain’t so great; in fact, it demands a dark and depressing response, one discouraging enough to suffocate any and all glimmers of hope that it might inspire.

Good evening. Some encouraging patterns in COVID-19 cases along with a restless craving for normalcy are fueling discussions on how and when to restart parts of the American economy.

But wait, there’s more. Less than 40 seconds later, Holt turned the stage over to supporting actor-in-the-field, Gabe Gutierrez, who reported the following:

Tonight as powerful winds and heavy rain pound the nation’s epicenter of the pandemic, a break in the ongoing storm, while the death toll has topped 10,000 in New York. State ICU admissions and intubations are dropping; the number of newly hospitalized patients is the lowest it’s been in two weeks.

See what they’re doing there? Every positive development concerning the Moo Shu Flu – positive for ordinary Americans, especially social conservatives, that is – must be offset by some negative datapoint of equal or greater weight. This is the mockingbird media’s idea of “fair and balanced.” (And yes, your friends at Fox are part of the club as well.)

In spite of their best efforts to throw a wet rag on any thought that life might soon return to some semblance of normalcy – with Americans once again free to recreate, work and worship without fear of harassment from uniformed representatives of the police state – word got out that President Trump, later the following evening (April 14), was going to announce efforts to chart a path toward reopening parts of the economy.

This, evidently, told the “news” media that it hadn’t sufficiently driven home the point on April 13 that the death toll in NY had topped the 10,000 mark – a psychological threshold that, once crossed, should have resulted in an exponential rise in panic and, more to the point, a corresponding decrease in optimism.

Wasting no time to avert the danger that hope may reign supreme, on April 14, Holt began with “BREAKING NEWS”:

Tonight, over 25,000 dead in America from Coronavirus, and in New York City, a shocking announcement late today: Why the death toll there has suddenly spiked by nearly 4,000.

Over 25, 000… a new threshold! As for that “shocking announcement” about NYC’s body count spike, the real answer as to “why?” is contained in the paragraphs above; positive news must be offset by something negative. It’s really no more complicated than that.

This much is entirely obvious when one considers how NYC healthocrats (i.e., healthcare officials whose decisions are guided by their loyalty to the party of death known as Democrat) went about concocting a way to bump the number of COVID-19 deaths by more than 57% in one fell swoop.

As reported by The Epoch Times:

The shift came after fire officials said there were hundreds of people dying at home every day in recent weeks.

Most of the newly counted deaths happened in emergency rooms or hospitals, while another 825 took place at home and 673 transpired at nursing homes, long-term care facilities, or hospices.

So, 825 of these deaths took place at home. Let’s think about this for a moment…

What are the most likely causes of people dying at home, generally speaking? One immediately thinks of such things as heart attack, terminal illness (i.e., patients receiving in-home hospice care), natural causes (i.e., the elderly), drug overdose, murder and accident. There may be others, but you get the point.

Among most of these persons, there is a reluctance to go to the hospital now days, especially in NYC. More to the point, those very likely not dying at home in the present environment are those who have exhibited signs of COVID-19; these are the very persons who are supposedly flooding NY area hospitals.

As for “emergency rooms, hospitals, nursing homes, long-term care facilities, or hospices,” death is a common occurrence in these places; i.e., it’s not exactly BREAKING NEWS!

These common sense observations made, let’s talk about those probable COVID-19 deaths.

Given that this claim is coming from those who presumably worship at the altar of Almighty Science, one might wonder exactly what strict scientific criteria is being used to justify a Coronavirus cause of death. The Epoch Times report continues:

New York City’s Health Department said it will now count any fatalities deemed as likely being caused by COVID-19 as a death caused by the new disease, which is caused by the CCP (Chinese Communist Party) virus, commonly known as the novel coronavirus. A “probable” virus death is defined by the department as a victim “who had no known positive laboratory test for SARS-CoV-2 (COVID-19) but the death certificate lists as a cause of death ‘COVID-19’ or an equivalent.”

No positive test, but the death certificate lists ‘COVID-19’ as cause of death.

It’s as though these agents of the devil cannot help but brag about their deceitfulness!

To be very clear: COVID-19 is real, and we can thank Jorge Bergoglio’s friends in the Chinese Communist Party (CCP) for creating it and then lying about it.

NOTE: Guess what is cited in the Constitution of the Communist Party of China as its guiding principals? If you guessed the errors of Russia, you are correct:

Many people throughout the world are contracting the CCP virus and a small percentage of them are dying. It is a terrible tragedy brought on by a godless regime, and no one with any intelligence is denying as much.

That said, equally undeniable is the fact that diabolical leftists and their pals in the mockingbird media are engaging in a massive act of viral deception relative to COVID-19, doing their level best to paint the darkest picture possible.

We’re simply erring on the side of caution for the sake of saving lives!

Please, these are the same merchants of death whose number one political priority is keeping abortion “safe and legal” and securing taxpayer funding for their favorite human genocide operation, Planned Parenthood. These people don’t give one wit about any human life, save for their own miserable existence.

Bottom line: This isn’t just a socio-political crisis; it’s a spiritual matter. Wherever one finds a coordinated effort to deceive, especially when one of the results of that deception is restricted access to Holy Mass and the Sacraments, one can be absolutely certain that the influence of the Master Deceiver is close at hand.

If you are not already doing so, make it a point to beg the aid of St. Michael the Archangel throughout the day. We need him to wield the mighty sword of truth on our behalf, now as much as ever. 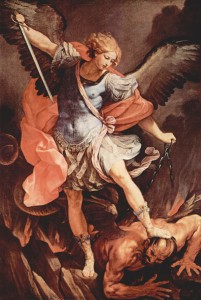 Saint Michael the Archangel, defend us in battle. Be our protection against the wickedness and snares of the devil; May God rebuke him, we humbly pray; And do thou, O Prince of the Heavenly Hosts, by the power of God, thrust into hell Satan and all the evil spirits who prowl about the world seeking the ruin of souls. Amen.

Benedict’s resignation: Does it pass the Catholic smell test?