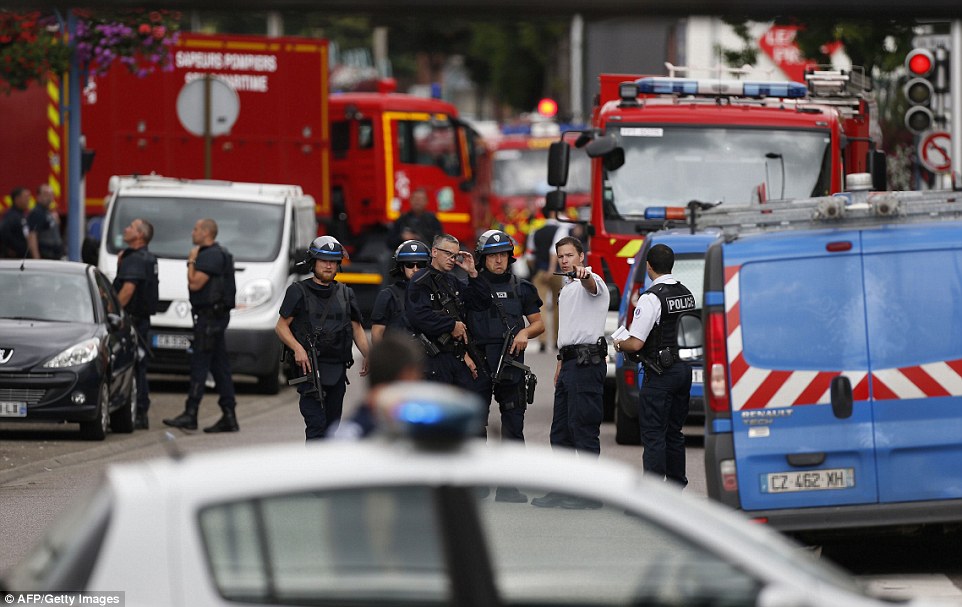 Today in France, an elderly priest was killed by two faithful Muslims who, in service to the false god of Islam, “Allah,” carried out the directive found in Qur’an 47:4:

“When you meet the unbelievers, strike the necks.”

Fr. Jacques Hamel, an 84 year old “unbeliever,” was offering Mass when the men entered the church, taking hostages among the faithful, and slitting the priest’s throat.

This act of violence was carried out, not by political activists engaged in what Cardinal Burke insists is “fundamentally a form of government,” but rather by devout followers of Islam in the practice of their false religion.

It claims to offer the very words of the God of Abraham and the way to everlasting life.

The deity of Islam, however, is false, as is its “prophet,” Muhammad; manifestations each of the Devil who demands for himself the worship that is due to God alone.

In Christianity, we the faithful are called to pick up our cross and follow Christ; i.e., to emulate Him in all things to the best of our ability.

According to the dictates of Islam, the way of perfection lies in emulating as closely as possible the life and conduct of Muhammad, the same who is held up as al-Insān al-Kāmil (the perfect human) and uswa hasana (an excellent model of conduct).

The Qur’an, the same blasphemous book of lies that plainly numbers Jesus as one among mere men, encourages following the example of Muhammad more than 90 times.

In order to do so, the faithful Muslim looks to the Sīra, which are traditional Muslim biographies of Muhammad (“Allah’s perfect messenger”), wherein one finds no less than 41 references that encourage beheading.

For the Muslim, this is how one goes about pleasing Allah and attaining eternal happiness.

This is a truth that even the most highly regarded of modern day churchmen, having drunk deeply from the conciliar well, find very difficult to acknowledge.

The reason is simple:

To look squarely at the reality of Islam is to come face-to-face with the abject failure of the conciliar program of interreligious dialogue, otherwise understood by “traditionalists” (aka Catholics) as the practical abandonment of the Church’s mission – namely, the Christianization of the entire world effected by converting those who dwell in darkness and ignorance to the one true faith.

“I cry out to God with all men of goodwill. I would invite non-believers to join in the cry.”

Yes, you read that correctly.

Even now, this “Successor to the Apostles,” apparently so saturated with the apostasaic humanism, liberalism and ecumenism of the Council that he can’t see straight, responded by extending an Assisi-style invitation to those who practice all manner of religion, or even none at all, to cry out to whomever they happen to believe in, or not, as if this is going to prove efficacious in addressing the Muslim menace.

Today, it would seem that almost nothing will open the eyes of our churchmen to the plain and simple reality that it is non-belief in Our Lord Jesus Christ and the Holy Catholic faith that is responsible for the absence of peace in our world; in the present case, as epitomized by violent acts carried out by the followers of Islam.

This being so, the answer is obvious; the condemnation of religious error and the call to conversion.

In any case, for anyone who may have harbored any doubts whatsoever about the fact that Islam is a false religion  and must be treated as such, today’s events alone should suffice to dispel them entirely:

Two faithful Muslims walked into a Catholic Church and killed Fr. Jacques Hamel – not for his political views, and not because he represented a rival form of government, but because he was an unbeliever; i.e., his neck was struck because of his religious beliefs.