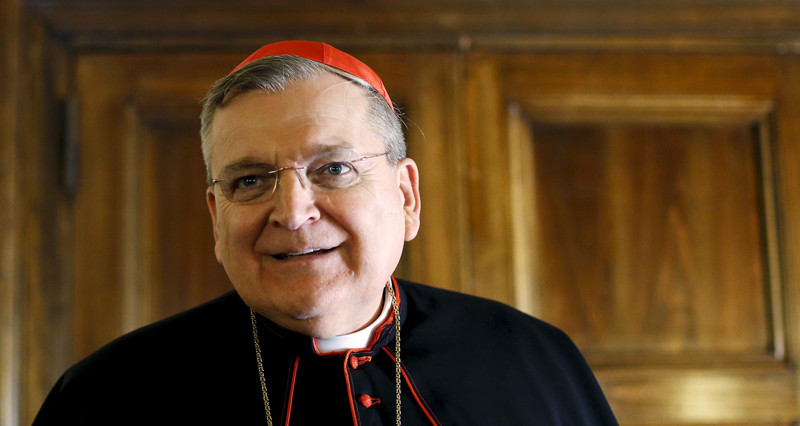 On May 20th, Archbishop Gänswein (a canon lawyer by training) confirmed what Stefano Violi, Professor of Canon Law at the Faculty of Theology in Bologna and Lugano, had been saying since 2013:

Benedict XVI did not intend to resign the Petrine ministry whole and entire, but rather to “transform” and “expand” it in such way as to include two members; one “active,” and the other, “contemplative.”

Less than a month later, Francis the Loquacious stunned the Catholic world by stating that the “great majority” of sacramental marriages are invalid.

In spite of the magnificent confusion that ensued in the aftermath of these events, the one man considered by many neo-conservatives to be the most qualified of all canon lawyers living today, Raymond Leo Cardinal Burke, has been conspicuously quiet.

On July 20th, however, he broke his silence; not with respect to the aforementioned scandals, but on the topic of Islam.

Predictably, Cardinal Burke’s words, which we will examine more closely momentarily, are being applauded by poor undernourished Catholics as an example of courage and straightforwardness.

I suspect that most are doing so, not out of malice, but out of sheer ignorance. Perhaps rereading Burke’s commentary through a Catholic lens (for those willing to endure a little discomfort) may prove helpful.

In any case, it ends up that Cardinal Burke has been quietly spending time in Wisconsin (his home state) working on a new book entitled, “Hope for the World: To Unite All Things in Christ,” which will be an extended interview conducted by a French journalist.

Speaking with David Gibson for Religion News Service in promotion of the effort, Cardinal Burke was quoted as saying that Islam is “fundamentally a form of government” that “wants to govern the world.”

He went on to say that he is concerned that many people do not understand that, in his view, “when they (Muslims) become the majority in any country they have the duty to submit the whole population to Shariah,” as the Islamic code of law is known.

According to Gibson, Cardinal Burke made it a point to stress that he did not want to be “disrespectful” of Islam or “generate hostility.”

As for an appropriate reaction to Islam, Burke is quoted as saying:

“The Church really should be afraid of it.”

Cardinal Burke had more to say, but at this, let’s see if we can untangle the mess he has created thus far.

First, let it be said that Islam, unlike monarchy, socialism, democracy, etc., is not “fundamentally a form of government.”

Yes, Islam does wish to rule the world, but here’s the key to truly understanding it:

Islam is first and foremost a false religion; one that directly opposes the reign of Christ the King and the Holy Catholic Church that He established for our salvation. As such, Islam labors to institute a system of worship and governance according to the diabolical ravings of the warmongering pedophile “prophet,” Muhammad, in service to the false god, Allah.

Cowardly clerics of the conciliar kind, like Cardinal Raymond Burke, cannot bring themselves to acknowledge as much; in fact, he is ever so careful not to be seen as being “disrespectful” toward Islam.

Think about that for a moment…

In exactly what way does this evil enterprise merit the respect of faithful Catholics?

Much less is it the case, as Cardinal Burke states, that “the Church really should be afraid of it.”

It amazes me how many Catholics, far from finding fault with this ludicrous statement, saw fit to approve of it!

How many times did Our Blessed Lord encourage His followers to “be not afraid”?

Yes, but Islam is a religion of the sword. Fear in this case is prudent!

St. Paul, in his Epistle to the Romans, tells us otherwise, saying:

What shall we then say to these things? If God be for us, who is against us? Who then shall separate us from the love of Christ? Shall tribulation? Or distress? Or famine? Or nakedness? Or danger? Or persecution? Or the sword?  (Romans 8:31,35)

The reason St. Paul’s words seem to have escaped Cardinal Burke is simple – they don’t really apply to his manner of thinking; i.e., God is not for those who think as he does.

Cardinal Burke went on to say:

When they (Muslims) become a majority in any country then they have the religious obligation to govern that country. If that’s what the citizens of a nation want, well, then, they should just allow this to go on. But if that’s not what they want, then they have to find a way to deal with it.”

On the one hand, Burke insists that Islam is “fundamentally a form of government.” On the other, he clearly recognizes that its quest to govern the world concerns “the religious obligation” to do so!

Indeed, Islam is fundamentally – that is, primarily and most basically – a false religion, and make no mistake about it – the Church need not fear it in the least.

A Catholic view of the Muhammadan menace is to realize that the Church must confront and condemn Islam for the evil that it is, and to labor for its eradication by way of conversion as she carries out the mission that was given to her by Christ the King.

The Burkes of the world no longer possess the clarity of thought that flows from a genuine sensus Catholicus, and the reason is that they have, willingly or not, abandoned the true faith in exchange for the conciliar counterfeit; the same that embraces the Americanist version of religious liberty as if it were sure doctrine.

As reported by Gibson:

When asked how the West should respond, the cardinal did not cite or endorse specific proposals, like those championed by the Republican presidential nominee Donald Trump and other conservatives, to ban or limit Muslims coming into the U.S.

“I think the appropriate response,” he said, “is to be firm about the Christian origin of our own nation, and certainly in Europe, and the Christian foundations of the government, and to fortify those.”

As for precisely which one – Jesus Christ, Allah, Buddha, Vishnu, or Mother Earth (one of Francis’ favorites) – well, that’s an entirely personal decision.

Seriously, folks, can we please dispense with the lie about “the Christian origin of our own (American) nation”?

The origins of this nation are not Christian; they are deist, protestant, and decidedly anti-Catholic.

The United States of America is constitutionally forbidden by law to formally and publicly recognize the exclusive rights of Christ the King and the Holy Catholic Church – the obligation of every individual, society and State.

Truly, Cardinal Burke provides a far better example of steadfast Americanism than he does authentic Catholicism – the former of which champions “the consent of the governed;” the latter the Sovereign Rights of Christ the King.

How else can one explain his insistence concerning Shariah law, “When they (Muslims) become a majority in any country … if that’s what the citizens of a nation want, well, then, they should just allow this to go on”?

In conclusion, I always take considerable heat from certain readers when I expose the hollowness of Cardinal Burke’s rhetoric. I’ve lost any number of supporters for this one reason alone. (If you feel moved to help offset that loss, I’d be most grateful.)

My intent in these posts is not to denigrate the man, but rather to urge readers to scrutinize everything, even those things that come from churchmen they happen to admire; measuring every last thought and idea against the mind of the Church as made known with clarity in the centuries leading up to Vatican Council II.

Yes, it takes effort, and it may very well lead to disappointment in men once idolized, but all of this pales in comparison to the joy of knowing the immutable truth that comes to us from Christ through His Holy Catholic Church.