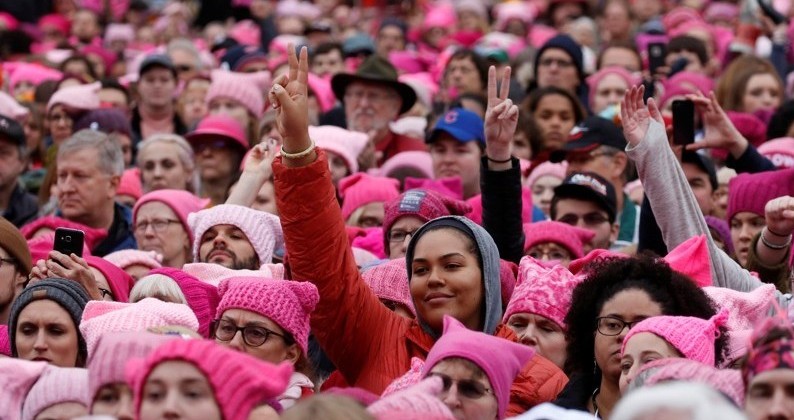 On Saturday, January 21, 2017, some half-a-million women marched on Washington, D.C., while countless others did the same in cities across the globe, “to show [their] presence in numbers too great to ignore.”

Actress, America Ferrera (whoever in the Hell that is) kicked-off the demonstration by reminding the D.C.  protesters – the majority of whom were wearing a so-called “pussy hat,” while others either carried signs or donned costumes designed to resemble female genitalia – why they were there:

Our dignity, our character, our rights have all been under attack, and a platform of hate and division [Trump] assumed power yesterday.

Thus reassured of their “dignity” and “character,” off the Vagina Demagogues went a marching!

According to organizers, their central intended message is “women’s rights are human rights,” to which end the demonstrators proposed to “stand together, recognizing that defending the most marginalized among us is defending all of us.”

The most marginalized? All of us?

At first blush (first, that is, for those who are not mortally stupid) the identity of the “Exclusive Premier Sponsor” of the event, Planned Parenthood, seems to tell us everything we need to know about where the real impetus for the rally is to be found.

Speaking on the march to the New York Times, Charmaine Yoest, President of Americans United for Life, said for instance:

I don’t think they represent women. I think they are a wholly owned subsidiary of the abortion movement.

Organizers of the event, for all of their duplicity (more on that momentarily), felt no need to deny the allegation.

As reported in the same NY Times story:

If you want to come to the march you are coming with the understanding that you respect a woman’s right to choose. – Linda Sarsour, Co-chairwomen of the Women’s March

Taking the opportunity to editorialize, NY Times writer Sheryl Gay Stolberg suggested that the march is part and parcel of the militant feminist movement (which she prefers to call the “second wave of feminism”) and the “sexual revolution” of the 1960s:

The relationship, and sometimes tension, between reproductive rights and feminism goes back decades, to the inception of so-called second wave feminism in the 1960s; the first wave culminated in women winning the right to vote. Its pioneers, echoing the American left’s fight for racial justice and its opposition to the Vietnam War, embraced the birth control pill as a way to give women more power over their own lives. Thus a sexual revolution was born. – Sheryl Gay Stolberg, NY Times

The “sexual revolution,” in particular as it is epitomized by the supposed right to exterminate one’s own offspring, indeed played a major role in the Women’s March, but that’s only part of the story.

Among the “communities” represented at the march according to its organizers were “immigrants of all statuses, Muslims and those of diverse religious faiths, people who identify as LGBTQIA, Native people, Black and Brown people, people with disabilities, and survivors of sexual assault.”

Let’s be clear: The march had nothing whatsoever to do with advocacy for “those of diverse religious faiths” (as every Catholic damn well knows), “Black and Brown people” (the same specifically targeted for slaughter by Margaret Sanger, the Founder of Planned Parenthood), “people with disabilities” (like unborn children diagnosed with Down’s Syndrome, 90% of whom are murdered in utero each year), or “survivors of sexual assault” (just ask the victims of William Jefferson Clinton).

As for the ever-growing alphabet soup of sexual deviance (“LGBTQIA”), most of these poor disordered souls will never be a candidate for abortion, and many a Muslim would sooner toss them off the roof of a four story building than look at them.

Reflecting on this mishmash of bedfellows, one is compelled to ask:

If not exclusively a demand for so-called abortion rights, to what drum beat were the women actually marching?

For an answer, let’s begin by following Sheryl Stolberg’s suggestion with a look back to the 1960s and the sexual revolution.

Though counter-cultural “hippies” are often credited with igniting the sexual revolution in the decade of “free love,” the move toward a society founded upon the denial of objective truth had long since been undertaken.

It was this abandonment of absolute moral norms that paved the way for the “beat generation” to go public with ever more shameless displays of deviancy; only to mature into such modern day abominations as “gay pride parades,” so-called “transgender” bathroom laws, and this past weekend’s Women’s March.

According to some social historians, the sexual revolution began not in the 1960s, but decades earlier.

Between the beginning of World War II in 1941 and the inaugural issue of Playboy in 1953, the overall rate of single motherhood more than doubled. The silent generation may have been silent about what they were doing, but they weren’t all that complacent. (Dr. Alan Petigny, Journal of Social History, Fall 2004)

Other researchers, like Italian philosopher Augusto Del Noce (the late mentor and friend of historian Roberto de Mattei), believe that the roots of the sexual revolution can be traced back much further still; all the way, in fact, to the French Enlightenment and its animus toward the Christianity.

As for the 1960s themselves, surely something changed as this marks the beginning of that time when the hidden sins of men, almost overnight, came to be treated as badges of honor worthy of public display.

Yes, but why then?

Readers of this space know the answer all too well!

This is the very moment in time when the voice of the Holy Catholic Church – she who alone was appointed by Almighty God to baptize and to teach the fullness of truth to the nations – all but abandoned her mission.

– Rather than preaching Good News of the redemption made available only in Christ and the one true Church that He Himself established, our churchmen instead chose to seek and applaud whatever “good” could be found in the multiplicity of world religions; including those that countenance such things as divorce, contraception, homosexual activity and even abortion.

– Rather than proclaiming the Sovereign Rights of Christ the King and the duty of every individual, society and nation toward Him, they asserted the rights of man as based upon human dignity alone; tacitly assenting to the separation of Church and State, thus setting the stage for “Catholic” civil authorities and voters to support intrinsically evil legislation to which they are (allegedly) “personally opposed.”

– Rather than condemning grave error, they opted to pacify both the ignorant and the evil with the “medicine of mercy” and endless dialogue, which is neither merciful nor constructive.

As a result, many in the world today no longer seem to know, or even care to know, the difference between truth and falsehood; in particular as it concerns matters of sexual morality. Indeed, the very concept of objective truth has become foreign to many in this generation!

Ours is an unprecedented age; one wherein sinful men have been left as never before to their own devices by churchmen too caught up in a tryst with the world to be bothered with nurturing them in eternal truth.

From the time of the French Revolution and the Marquis de Sade (whom Del Noce called “the founder of eroticism”) up until the time of the Second Vatican Council, the voice of Holy Mother Church was clear.

Sure, sinful men all-too-often ignored her, but even those who fell still heard her speak even if only in the deepest recesses of their heart; so much so that they simply knew better than to flaunt their transgressions before God and men.

Once our churchmen decided that it was expedient to commingle the truth with error, however, thereby giving one the impression that each has an equal right to be taught, heard, believed and practiced in human society, the fallen nature of humankind urged him not only to gravitate toward the latter with increasing abandon, but also to boast of his debauchery in public.

Long story short; unabated by the grace of God effectively held hostage by faithless men of the Church (including popes), from the 1960s to the present, sin has abounded and exponentially so.

It’s simply a matter of Truth or consequences; when the Truth is not preached with clarity and conviction by those appointed by God to do so, the world will suffer the consequences.

This past Saturday, they were broadcast throughout the world for all to see.

Since then, countless women with intellects duly darkened by sin have taken to social media to offer testimonials of their “amazing experiences” at a demonstration demanding federal funding for the killing of their own unwelcome young under the banner of “Love Trumps Hate.” You can’t dream this stuff up; only the Devil can do that.

The so-called “Women’s March” was truly nothing other than an open act of rebellion against the Author of the Divine Law; a demon-infested parade of lost souls figuratively pointing an accusing finger heavenward while howling “We’ll show you who’s boss!”

This sad state of affairs is not, properly speaking, the fruit of liberal politicians like Barack Obama, social engineers like George Soros, or entertainment industry freaks like “Madonna” (Blessed be Mary, Ever Virgin!); these persons would never have risen to such prominence had the sacred hierarchy of the Holy Catholic Church not rebelled first.

Our Lady warned us at Fatima. We didn’t listen. And now we’re paying the price.

At this, we will give Pope Pius XII the final word:

We see ever more clearly the sacred significance of that consecration of mankind to Christ the King; We see its inspiring symbolism; We see its power to refine and to elevate, to strengthen and to fortify souls. We see, besides, in that consecration a penetrating wisdom which sets itself to restore and to ennoble all human society and to promote its true welfare.

It unfolds itself to Us ever more clearly as a message of comfort and a grace from God not only to His Church, but also to a world in all too dire need of help and guidance: to a world which, preoccupied with the worship of the ephemeral, has lost its way and spent its forces in a vain search after earthly ideals.

It is a message to men who, in ever increasing numbers, have cut themselves off from faith in Christ and, even more, from the recognition and observance of His law; a message opposed to that philosophy of life for which the doctrine of love and renunciation preached in the Sermon on the Mount and the Divine act of love on the Cross seem to be a stumbling block and foolishness.

(Pope Pius XII, On the Unity of Human Society)