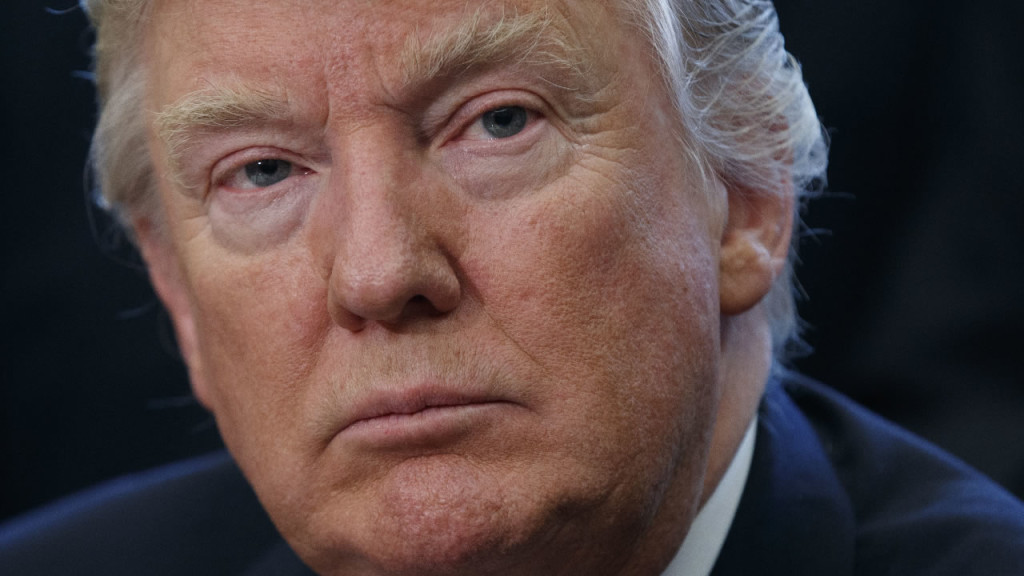 On September 8, 2020, Fr. Ian Bozant, FSSP, Administrator of the National Shrine of St. Alphonsus Liguori in Baltimore, sent a letter to President Donald Trump urging him to visit the parish on October 7th – the Feast of Our Lady of Victory – to consecrate the United States to the Immaculate Heart of Mary.

I’ve been a parishioner of St. Alphonsus for many years and, although I do not know him personally, I am familiar enough with Fr. Bozant to report that he offers Holy Mass with careful reverence. He’s also a powerful preacher, about whose intention to uphold Catholic tradition to the best of his knowledge and ability I have absolutely no doubt. 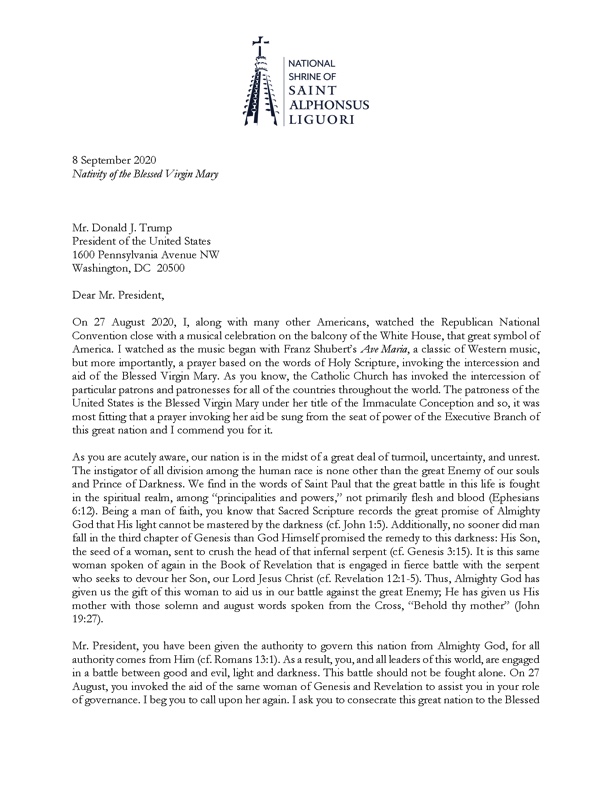 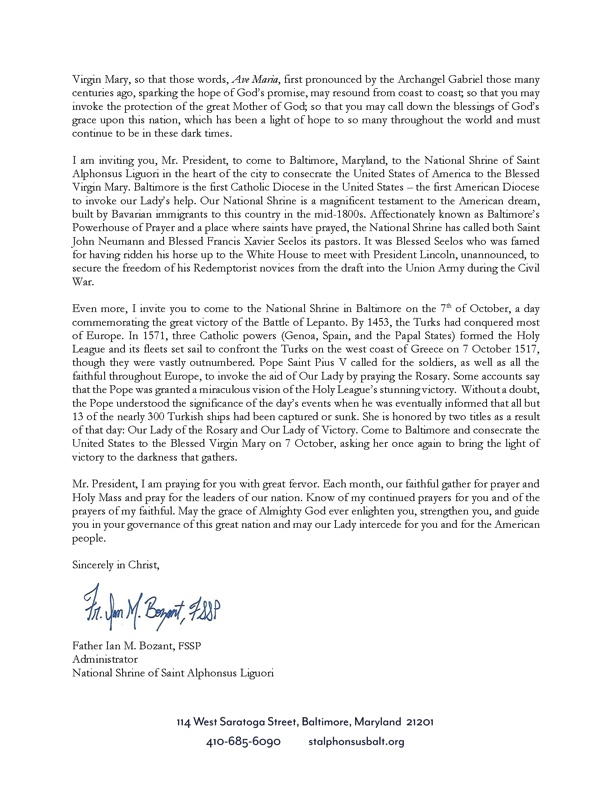 It is, presumably, upon the basis of his God-given authority that Fr. Bozant considers President Trump qualified to fulfil his request to consecrate the nation to Our Lady.

But is he really?

Given that it is fitting to make an act of consecration to the Immaculate Heart of Mary, not only for oneself, but also for one’s children inasmuch as we have authority over them and can act on their behalf, one may initially consider that he is qualified. When we undertake to make such acts of consecration, however, we do so not only with the authority to do so, but also with a firm belief in Our Lady’s exalted place in God’s plan of salvation, her unique role as intercessor and Mediatrix, etc.

There is little reason to imagine that President Trump, who is not a member of one true Church of Christ, actually holds these truths about the Mother of God, apart from which the act of consecration would be a mockery, and the intention, at best, doubtful.

With all of this in mind – to say nothing of the President’s support for LGBT activism and exceptions for abortion – I must admit that the idea of asking him to consecrate the nation to the Immaculate Heart of Our Lady never sat right with me.

Having said that, let us now turn our attention to what happened roughly three weeks after Fr. Bozant sent his letter to President Trump.

On September 25, 2020, Fr. Michael Stinson, North American Superior of the FSSP, sent a letter (below) to Fr. Bozant and the parishioners of St. Alphonsus alerting all concerned to the “Withdrawal of Presidential Invitation.” 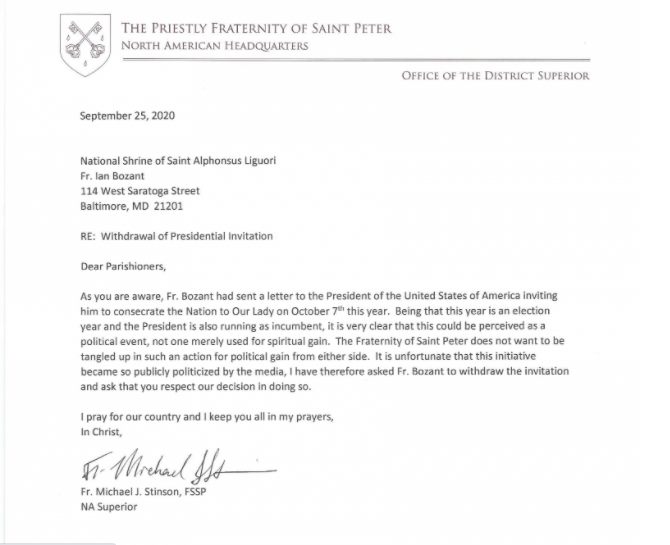 In this letter, Fr. Stinson explained why the invitation was being withdrawn, writing:

Being that this is an election year and the President is also running as incumbent, it is very clear that this could be perceived as a political event, not one merely used for spiritual gain. The Fraternity of Saint Peter does not want to be tangled up in such an action for political gain from either side.

If Fr. Stinson had withdrawn the invitation in light of the concerns that I expressed above, I would have taken no issue with his decision; on the contrary, I would have applauded it. The reasons he provided, however, are a cause for concern, raising a number of serious questions:

– Why does it matter how others – presumably, the enemies of Our Lord – might perceive an act of consecration of the nation to Our Lady?

– If the good of society and the salvation of souls is at stake, as it is in every presidential election, why can’t the Church participate in a so-called “political event”?

– Are we to understand, as the letter implies, that the invitation to consecrate the US to the Immaculate Heart of Mary will be re-extended after the election to whomever the victor may be?

– Does the FSSP believe, as Fr. Stinson’s letter seems to suggest, that the State must be separated from the Church, a thesis that Pope St. Pius X called “absolutely false, a most pernicious error” (Vehemnter Nos 3)?

– Given that “every body politic must have a ruling authority, and this authority, no less than society itself, has its source in nature, and has, consequently, God for its Author,” and “everything, without exception, must be subject to Him, and must serve Him,” does not the Church and her ministers, who serve as the voice of God in this world, have a duty to engage in matters political?

– When writing about “political gain from either side,” does Fr. Stinson mean to suggest that the Church has no preference whatsoever in the matter?

For an answer to these questions, I placed a call to Fr. Stinson over a week ago. I also reached out to his communications director via email. Neither one has answered. If that should change, I will keep you posted.

In the meantime, allow me to state the obvious:

The overwhelming majority of clerics in the US behave as if the Divine Commission given by Christ must be amended as follows:

Going therefore, teach ye all nations; baptizing them in the name of the Father, and of the Son, and of the Holy Ghost. Teaching them to observe all things whatsoever I have commanded you, but whatever you do, be certain not to jeopardize your tax exempt status!

If no other good came from his efforts, Fr. Bozant did well to inform President Trump that his authority comes from Almighty God. Based upon the reaction of his Superior, however, it would seem that Fr. Stinson and perhaps the FSSP as a whole may need to be reminded that the Church’s authority and that of her pastors comes from the Same, and it is He, not the State, to whom they are beholden.