Home
Blog Post
Do Catholics have a right to reject papal teaching? 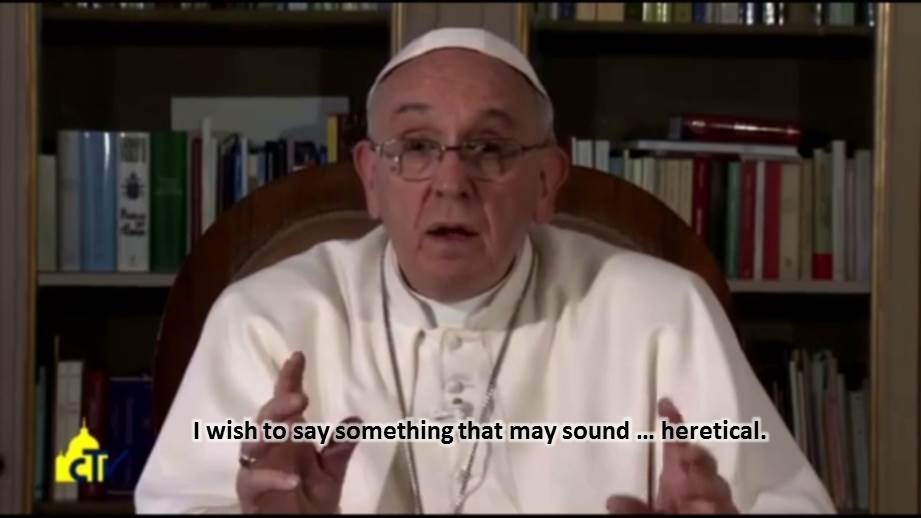 As regular readers are well aware, I have been pondering authentic Catholic tradition concerning the Office of Peter, its special prerogatives and, more to the present point, the duty of the laity toward its occupant and his teaching.

At this point in my journey, it seems to me that we, the faithful, have no right to ferret through official papal proclamations, embracing the teachings we find acceptable, while rejecting those that offend our Catholic sensibilities. At least that is what the popes of tradition seem to have been teaching.

The task pertaining to them (incumbent upon all of the faithful) in all the things that concern religion and that are closely connected to the action of the Church in human society is this: to be subject completely in mind and will, just as all the other faithful are, to their own bishops and to the Roman Pontiff; to follow and make known their teachings; to be fully and willingly subservient to their influence; and to reverence their precepts and assure that they are respected. (Apostolic Letter, Epistola Tua)

Consider Amoris Laetitia, for instance. Are there any among the readers of this space who have followed and made known the teachings of Jorge Bergoglio (or Francis as he is widely known) as contained therein? Are there any who are fully and willingly subservient to the influence of his false doctrines? Do any one of you actually reverence and respect the precepts he has set forth?

God forbid! What we have done – by necessity in order to remain in the bosom of the Church – is to reject his erroneous teachings in favor of that which had been taught by previous popes.

Now, that should keep us on safe ground! But wait, if Jorge Bergoglio is a true and legitimate pope, do we really have the right to do so? Here’s what Pope Leo XIII had to say on this topic:

It is to give proof of a submission which is far from sincere to set up some kind of opposition between one Pontiff and another. Those who, faced with two differing directives, reject the present one to hold to the past, are not giving proof of obedience to the authority which has the right and duty to guide them. (ibid.)

The math here isn’t hard to do, folks: If Pope Leo XIII is to be trusted, and I dare say that he is, the only way that a member of the Church is justified in rejecting the teachings set forth by Francis is if the man isn’t really a pope at all! In all sincerity, I see no other way to reconcile my duty as a Catholic with the diabolical nonsense spewed forth in official texts (some of it ordered into the AAS) by the man claiming to be “Pope Francis.”

Equally as sincere tradition-minded persons, however, insist that we laity do indeed have the right, and at times even the duty, to “recognize and resist” papal errors; i.e., reject them outright in favor of what had been previously taught.

In assessing Our duty and the situation now prevailing, We have been weighed upon by the thought that a matter of this kind is so grave and so dangerous [to the Faith] that the Roman Pontiff, who is the representative upon earth of God and our God and Lord Jesus Christ, who holds the fullness of power over peoples and kingdoms, who may judge all and be judged by none in this world, may nonetheless be contradicted if he be found to have deviated from the Faith.

This certainly seems to indicate that a member of the Church may indeed “contradict” Francis inasmuch as he has clearly “deviated from the Faith,” even if he is a true pope – a proposition that flies in the face of the aforementioned teaching of Pope Leo XIII (and others). So, what is one to make of all this?

Pope Paul IV begins by stating the purpose of the text:

By virtue of the Apostolic office which … We are bound to be diligently watchful after the manner of a vigilant Shepherd and to ensure most carefully that certain people who consider the study of the truth beneath them should be driven out of the sheepfold of Christ and no longer continue to disseminate error from positions of authority.

So, the stated purpose of the text is not so much to inform the laity as to their rights in the face of false papal teaching; rather, it is to address, and ultimately “drive out” those who would disseminate error from positions of authority.

NB: The present papal bull is not addressed to the laity at all; it is directed to those in authority. In article 3, the pope makes known precisely to whom he is speaking and why:

We are aware that Bishops, Archbishops, Patriarchs, Primates, Cardinals and Legates, Counts, Barons, Marquises, Dukes, Kings and Emperors (who ought to teach others and offer them a good example in order to preserve them in the Catholic Faith), by failing in their duty sin more gravely than others; since they not only damn themselves, but also drag with them into perdition and into the pit of death countless other people entrusted to their care or rule, or otherwise subject to them, by their like counsel and agreement.

NB: Here we find an important distinction being made between the act of teaching others and offering them a good example. Keep this in mind as we continue.

Even so, let us continue. The Holy Father goes on to provide the citation given by my friend, the key portion of which reads:  The Roman Pontiff … may nonetheless be contradicted if he be found to have deviated from the Faith.

NB: The persons toward whom the pope is speaking bears mention once again: The Holy Father is telling Bishops, Archbishops, Patriarchs, etc. that they, on occasion, may “contradict” the pope; he’s not granting such permission to the laity as a whole.

To find out, we will jump ahead to that portion of the text wherein the Holy Father elaborates upon the sorts of offenses that he has in mind. He writes of those who…

…have been detected to have deviated from the Catholic Faith, or fallen into any heresy, or incurred schism…

NB: Herein lies an unmistakable clue as to one of the definitions we seek!

Evidently, we are to understand that “deviated from the Catholic faith” refers to something other than heresy and schism inasmuch as these are addressed separately, not just here, but no less than half-a-dozen times more as the text continues. For example:

Anysoever who (which may God, in His clemency and goodness to all, deign to avert) shall in the future so deviate or fall into heresy, or incur schism, or shall provoke or commit either or both of these.

The answer, it seems, is given several paragraphs later:

Nonetheless, We also consider it proper that those who do not abandon evil deeds through love of virtue should be deterred therefrom by fear of punishment…

In other words, the deviation that Paul IV appears to have in mind concerns moral failings; i.e., a lack of virtue as made manifest in evil deeds. With all that has been said thus far in mind, one may reasonably understand that Paul IV is simply saying:

If the Roman Pontiff should lack in virtue, commit evil deeds, and thus fail to provide a good example to the faithful, Bishops, Archbishops, Patriarchs, Primates, and Cardinals, etc., are free to teach otherwise and even to criticize his behavior.

Toward the end of the text, the Holy Father offers a bit more insight into the meaning of the word “contradict” as he intends it to be understood. He writes:

No one at all, therefore, may infringe this document of our approbation, re-introduction, sanction, statute and derogation of wills and decrees, or by rash presumption contradict it.

My friend proposed other texts that he believes will make the case. Perhaps those dogs will hunt. I’ll keep you posted.

The Vatican’s NYC coming out party