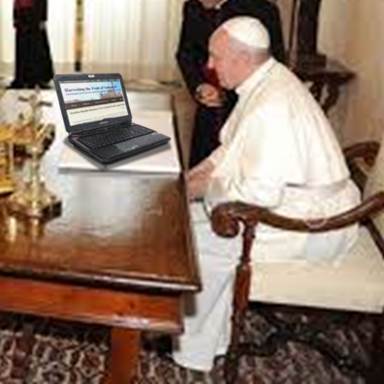 Look, I’m neither Sherlock Holmes nor Sherwin Williams, but please allow me to draw from the palette of circumstantial evidence to paint you a little picture.

There, I said it. Yea, I know… it sounds awfully arrogant, but the facts speak for themselves. Kinda.

On September 5th I posted a piece entitled, Pontifex Humilis Maximus – Pt. 2: A denial of the resurrection?  in which I wrote:

[It] is precisely the error described in the previous post; it focuses on Christ the Servant apart from Christ the King. Another way to phrase it, however, is to say that it comes dangerously close to a denial of the resurrection. You see, what appears to be absent from … Pope Francis’ public persona, is the fact that the Roman Pontiff is not simply the Vicar of the itinerant Jesus of Nazareth who died on the Cross; he is, more properly speaking, the Vicar of Him who defeated death, is risen from the dead, and now reigns in glory.

Well, clearly the Holy Father read my triumphalistic comments about his obvious distaste for the more majestic outward signs that are rightly associated with the papacy as less than a week later he responded with a papal, “No you!”

According to Vatican Radio:

Christians are called to proclaim Jesus without fear, without shame and without triumphalism. Those were the words of Pope Francis at Mass this Tuesday morning (Sept. 10th) at the Casa Santa Marta. The Pope also stressed the risk of becoming a Christian without the Resurrection. Finally, said Pope Francis there is the group of Christians who “in their hearts do not believe in the Risen Lord and want to make theirs a more majestic resurrection than that of the real one. These, he said are the “triumphalist” Christians.

One of these days I’ll get around to seeking confirmation of His Holiness’ readership from Fr. Federico Lombardi, but in the meantime, I think it’s pretty obvious what’s going on here.

So, now that I have every reason to suspect that Pope Francis is a regular reader, I’m going to compose and post a handful of questions for the Sovereign Pontiff, which, in time, I have every confidence he will answer just as he answered the atheist Eugenio Scalfari.