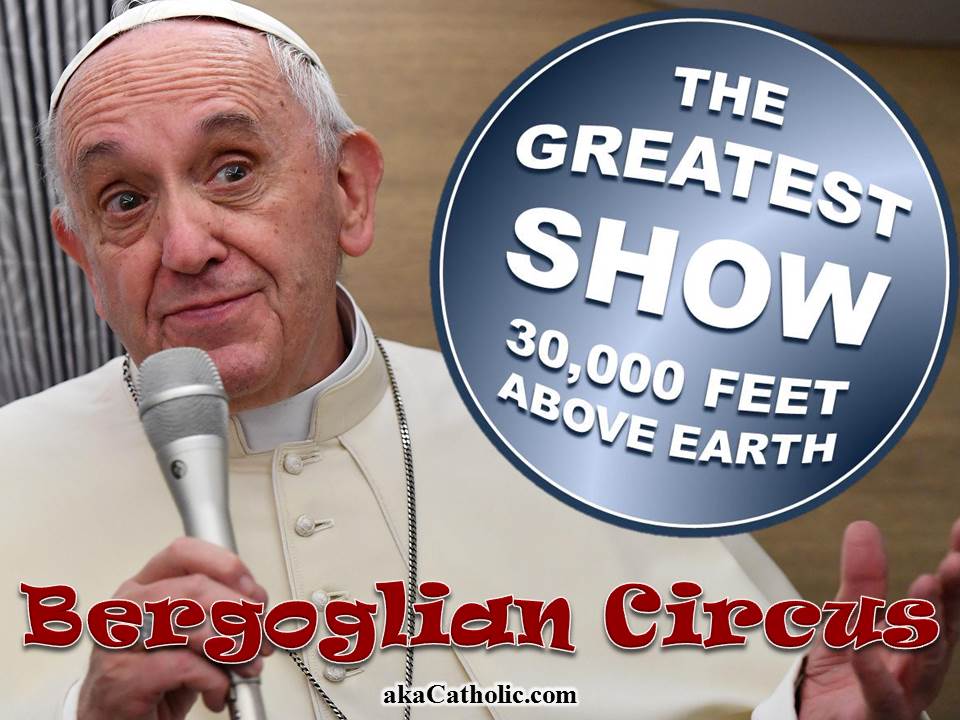 The Greatest Show 30,000 Feet Above Earth®, otherwise known as the Bergoglian Circus, is in the news once again.

Yesterday, aboard the “papal” airplane en route to the Chilean port city of Iquique, to the utter delight of Heathens and Humanists, and Heretics of all Ages ®, the ringleader of Modernist Rome performed a never-before-seen stunt.

Billed by publicists in the Vatican as a “marriage ceremony,” this latest act of daring is perhaps the greatest feat of illusion Bergolgio has performed since 2013 when first he managed to convince unsuspecting Catholics the world over that he is the Successor of St. Peter; thus providing proof positive that a sucker is indeed born every minute.

On an even more serious note…

What Jorge did yesterday was exactly what Jorge has been doing from the very the moment he adopted the stage name Francis; that is, mock the Holy Catholic faith – the same that he obviously (more so with every passing day) simply does not hold.

It was also very much in keeping with the program set forth in Amoris Laetitia; a text that provides written instructions for those who wish to join him in trivializing the Sacraments; in particular, Confession, Holy Matrimony, and Holy Communion.

That said, while it may not be apparent at first glance, one may rightly understand that yesterday’s dog-n-pony show – like the Council itself and pretty much every destructive program that has followed – was inspired by ecumenism.

As far as authentic Catholic sacramental theology is concerned, the three Sacraments of Confession, Holy Matrimony, and Holy Communion are among the greatest stumbling blocks of the seven to our so-called “separated brethren,” the heretics.

[NOTE: There is, however, one conspicuously missing from that list; Holy Orders. As such, one can be absolutely certain that the priesthood is squarely in the Bergoglian crosshairs at this very moment, and the reason is the same, ecumenism (and hatred for the Catholic faith… then there’s that.)]

The Constitution on the Sacred Liturgy of Vatican II pulled no punches in its opening paragraph:

In other words, the pressing question before the Council was, What can we do to make the heretics accept us?

Whatever doubt may have existed on this note when first these words were presented to the Council Fathers has surely been removed by now, thanks in no small measure to the so-called “liturgical reform” that followed as a direct result.

In other words, today, it is perfectly clear to all with eyes to see that placating the concerns of the heretics was, and remains, the driving impetus for all things conciliar and post-conciliar.

Yesterday’s stunt was no different; it was just one more way of showing the protestants, and indeed the world, that the new Catholic Church (an imposter if ever there was one) has loosened up; in this case, that it no longer has such a “rigid” view of marriage (you know, like the one Christ preached).

If ever one needed additional proof that the Devil is orchestrating these events, the fact that the Vatican’s mouthpieces are lying about yesterday’s events should do the trick.

Greg Burke, the Unholy See’s head spin master, insisted that the in-flight “marriage ceremony” was “not the Pope’s idea; it was their idea, but the Pope was happy to do it.”

Speaking with reporters aboard Heretic One, the happy husband gave a different account, saying, “He [Francis] thought of it … I don’t know if someone had said something to him.” 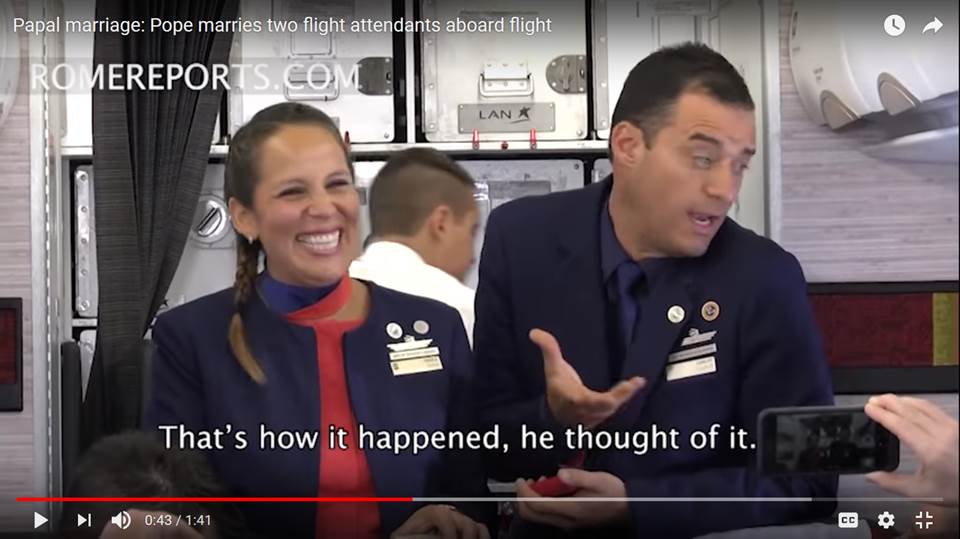 The Associated Press reported that the blushing bride was “stunned” and “nearly speechless during the remaining hour on the flight.”

Does anyone really believe that this couple of flight attendants showed up for work yesterday with a plan to ask Jorge to marry them, and this even though they knew full well that their boss, the owner of the airline, would also be on board?

No one with even an once of common sense is buying that story.

According to the couple, Francis said:

Marriage is the sacrament that the world is lacking. Let’s hope that what you have done will be an inspiration to other couples. That’s why I’m doing this.

In order to make sense of what Francis said, it’s important not to read too much into this, or better said, we must avoid reading Catholicism into this.

You see, one who views marriage with Catholic eyes might assume that Francis did not consider the couple to be sacramentally married until he graciously volunteered to do whatever in the Hell he actually did yesterday.

Those who have been paying attention know better.

In June of 2016, speaking at the Pastoral Conference for the Diocese of Rome, Francis said that he is “sure that cohabitating couples are in a true marriage having the grace of marriage.”

This being so, when we read the words attributed to Francis, “That’s why I’m doing this,” we can be sure that he does not mean to say that he is hoping to “inspire” those in civil marriages to take the steps necessary to make them sacramental.

Now, a word about the happy couple…

For the most part, I feel sorry for them. All indications are that they have been exploited as mere props in the ongoing propaganda operation widely misunderstood as the “pontificate of Francis.”

That said, the story is that they had planned to marry in their parish church, but an earthquake in 2010 damaged it to the point that it had to be postponed.

Bummer, but c’mon, folks… That was eight years and two kids ago! Look, I don’t know a thing about these people and I’m not judging them, but I do know this:

Instead, according to the husband, after asking Francis to bless their marriage, out of the blue, “The pope asked us if we were married in the Church.”

This from the same guy who, remember, declared that cohabitating couples enjoy “the grace of marriage”?

Something stinks, folks. This thing was a set up from Jump Street; location, Rome.

The couple was unwittingly used, that much seems clear, but the joke isn’t just on them but rather on every sucker that still believes, against so much evidence to the contrary, that Jorge Bergoglio is Catholic.

This entire thing is, in fact, a total farce; nothing about it spontaneous, including on the part of the photogenic “newlyweds.” It is precisely the kind of FAKE NEWS that Signor Humble has been known to decry. (H/T Michael Hichborn at Lepanto Institute.)

As reported by Chilean media nearly one month to the day before yesterday’s performance:

Both [of our two “newlyweds”] were married by the civilian [court] eight years ago and now have two daughters, 3 and 6 years old. However, they planned to get married by the Church, which they did not manage to do: the date of the marriage was set for February 27, 2010 … Thus, both hope that in January this delayed plan can finally materialize on the plane and directed by none other than Pope Francis himself. “We would love it, it’s our place, it’s our second home, it’s where we feel safe,” Podest said.

How pathetic. Face it, folks; the Vatican is overrun by scoundrels and liars. We’ve known that since at least the year 2000 when they claimed to published the entire Third Secret of Fatima.

Worse and far more importantly, this “Francis” person is nothing more than the compliant invention of the Church’s enemies; an Argentinian heretic (more accurately, apostate) posing as a pope, and the preponderance of self-identified Catholics are either too deprived of the faith to recognize it, or too cowardly to admit, much less, address it.

The COVIDS: By Dr. Suess