Home
Blog Post
The imprisonment of the FFI continues 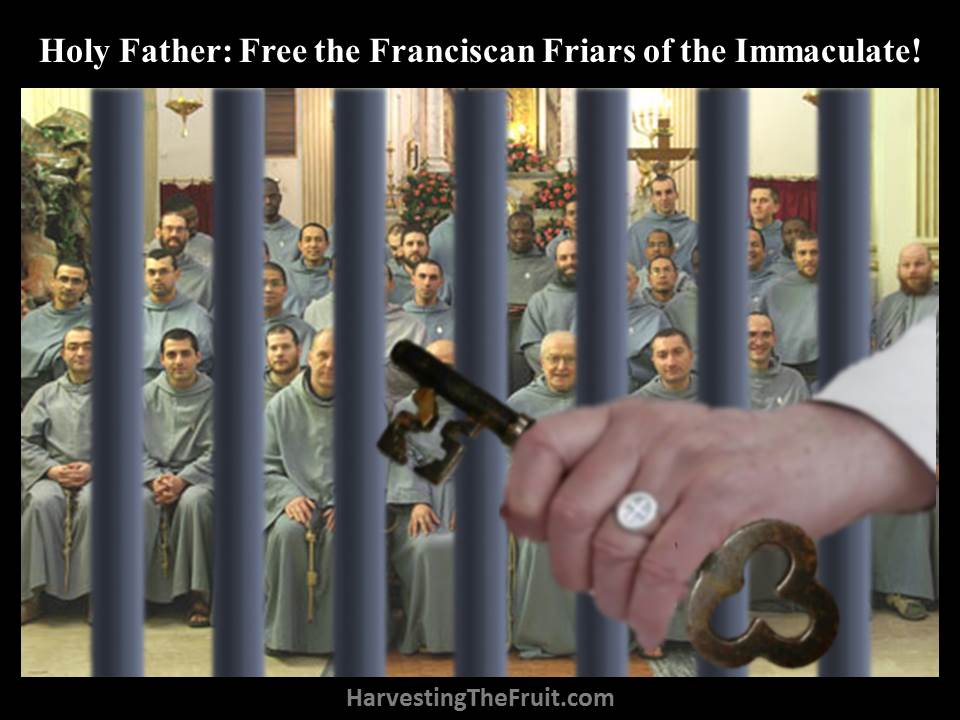 On June 10th Pope Francis met with roughly 60 Franciscans of the Immaculate along with the man he appointed to oversee the order as Pontifical Commissioner, Fr. Fidenzio Volpi.

The most detailed account of the meeting to be published to date comes from Andrea Tornielli of La Stampa, some excerpts of which follow.

Pope Bergoglio proved to be well informed on all issues, following the matter closely, and several times showed his appreciation for father Volpi, quelling rumours that the actions of the government of the commissioner and his collaborators were undertaken without the Pope’s knowledge.

Based on the steady stream of unvarnished hostility flowing from the lips of Pope Francis toward traditionalists (aka Catholics) over the entire length of his fifteen month pontificate, has there ever been any reason to doubt the influence of his hand in the mistreatment of the FFI? I never did.

On the motu proprio, Pope Francis said he did not want to deviate from the line of Benedict XVI, and reiterated that the Franciscan Friars of the Immaculate remained free to celebrate the old mass, even if for the moment, in light of the controversies surrounding the exclusive right to use that missal – an element that did not constitute part of the founding charisma of the institution – they required “a discernment” with the superior and with the bishop if it concerned celebrations in parish churches, sanctuaries and teaching houses.

In other words, the pope told the prisoners that they are free to travel abroad, even if for the moment they must first seek the gatekeeper’s permission, which may or may not be given, to have the cell unlocked and the shackles removed from their ankles.

Needless to say, anyone who has ever taken the time to read Summorrum Pontificum knows perfectly well that the restrictions under which the FFI are being required to operate are the very definition of a “deviation” from “the line of Benedict XVI.”

No surprise here. The neo-modernists as a whole, in case you haven’t noticed, whether in a parish setting, a diocesan office, or a pontifical commission in Rome, operate from the presumption that they are the smartest, most well-informed people in the room.

Without becoming an ideological banner… This phrase falls squarely into the “doth protesteth too much” category; otherwise known in Freudian terminology as “psychological projection.”

You see, for intrepid protectors of tradition like Cardinal Ottaviani, Cardinal Bacci and Archbishop Lefebvre; men for whom Christ Our Redeemer and King always occupied first place, when it came to the Novus Ordo, their concern centered around an awareness that the rite “deviates most seriously from the theology of the Catholic Mass.” (cf “Ottaviani Intervention” sent to Pope Paul VI on Sept. 25, 1969)

Those, on the other hand, who operate under the influence of that conciliar poison which causes one to behave as if “all things on earth should be related to man as their center and crown” (Gaudium et Spes – 12), the same individuals who are determined to shove this deficient rite down our collective throats, for them the eye of the current liturgical hurricane most certainly rotates around concerns ideological; i.e., earthbound matters pertaining almost exclusively to the social order.

One question concerned the interpretation of the II Vatican Council … He then responded to the objection according to which the II Vatican would only be a castoral council, which has damaged the church.

A “castoral” council. Ha! This no doubt innocent typographical error has just found a new home in the Tradwriter’s lexicon.

Castoral Council: (noun) A council of the Holy Catholic Church, the net result of which is the swift and effective detesticulation of her sacred pastors.

I’m sure that an opportunity to put it in play will present itself soon enough.

He then reminded them that all councils have provoked uproar and reactions, because the demon “does not want the church to become strong”. He also said that we must move forwards with a theological and not ideological hermeneutic of the II Vatican.

All councils have provoked uproar and reactions.

Yes, but let us not forget that Vatican Council II is unique in that it was a castoral exercise. (Wow, that didn’t take long.)

Seriously, there is no comparison to be made between the likes of the Nicea and Constantinople Councils and Vatican II as the latter was not called upon, in the face of certain heresies, to settle profound doctrinal questions via the issuance of dogmatic definitions.

Why on earth would a council charged with rearticulating the well-established sacred deposit of Christian doctrine “pure and integral, without any attenuation or distortion” provoke uproar and reactions in the Church?

There’s only one reason; it didn’t.

The demon “does not want the church to become strong.”

This is absolutely correct, which is precisely why the demon has been dancing with delight ever since the Vicars of Christ, from Paul VI to Francis, chose to hang their zucchetti almost exclusively on the text of a council that managed, in the course of roughly three years, to confuse the doctrine of the faith as established with precision and clarity over the course of the preceding nineteen centuries.

We must move forwards with a theological and not ideological…

Always with the ideology, this one!

Francis also said that he had wanted the closure of the theological institute within the Franciscans of the Immaculate (STIM), so that the seminarists would study in the pontifical theology faculties of Rome. He then explained that the Church guarantees orthodoxy through the Pope.

Ah, yes… “the pontifical theology faculties of Rome,” wherein every tradition-minded instructor, well aware of the screws that have been tightened upon the FFI, walks on egg shells for fear of inviting suspicion of having their own crypto-Lefebvrian tendencies.

And let’s get something straight: While it may be said that the authority vested in the Petrine Office, when legitimately exercised in service to the doctrine of the faith as guardian and teacher, is a guarantor of orthodoxy; every individual pope at any given time? Not so much.