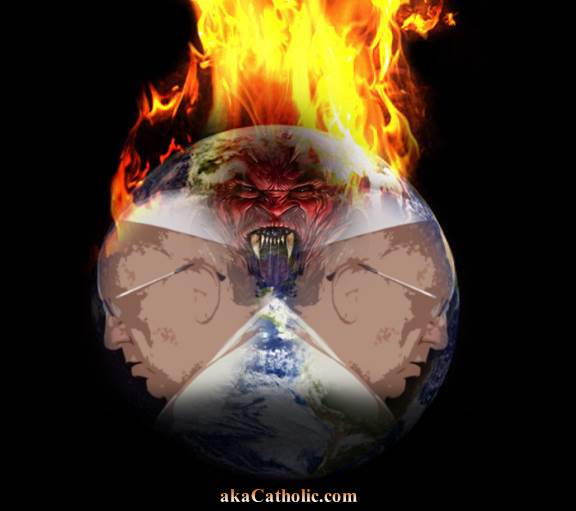 Rorate Caeli recently posted a thought provoking piece by Professor Roberto de Mattei about the laser light show desecration of St. Peter’s Basilica that took place on the Feast of the Immaculate Conception; an event sanctioned by the world renowned author of the environmentalist manifesto, Laudato Si’, Jorge Mario Bergoglio.

Among the observations offered in his essay, Professor de Mattei wrote:

On earth, [there is] a prodigious hierarchy of created beings of inorganic material culminating in man … Environmentalism is presented as a vision of the world which turns this hierarchy upside down, by eliminating God and dethroning man. Man is placed on a level of absolute equality with nature in a relationship of interdependence, not only with the animals but also with the inanimate components of the environment which surround him … The Earth with its biosphere forms a sort of unitary, cosmic-geo-environmental entity. It becomes something more than “a common home”: it represents a divinity.

While these points are certainly well made, they may perhaps benefit from further treatment.

Indeed, all of the problems facing mankind today are but symptoms of the underlying disorder that entered the world the very moment rebellious man chose to put himself in the place of God; namely, original sin.

Nothing under the sun is new, neither is any man able to say: Behold this is new: for it hath already gone before in the ages that were before us. (Ecclesiastes 1:10)

While this has ever been the case, our day is somewhat unique in that the leaders of the Catholic Church, beginning in earnest at Vatican II, have entered into a relationship of complicity with the rebellious usurpers of God’s throne:

As Pope Paul VI gushed with humanist affection in his speech at the Council’s closing, it was the peaceful encounter between “the religion of the God who became man [and] the religion of man who makes himself God.”

Thus have the problems associated with the virtual enthronement of man in the place of God accelerated at an unprecedented pace over the last several generations as the only thing that can possibly mitigate the effects of original sin – the Holy Catholic Church as she faithfully continues the saving work of her Founder and Head, Christ the King – has all but ceased to carry out the mission that He gave to her.

And so it is that the diabolical seems to be gathering momentum exponentially in our day as evidenced by the spread of such evils as abortion, contraception, and euthanasia; each of which lurks just beneath the surface of the present topic of discussion, environmentalism.

As Professor de Mattei said, environmentalism does indeed propose to eliminate God, but it must be noted that this movement is part and parcel of the same rebellion wherein arrogant men dared to assume His place, and make no mistake about it – the revolutionaries have no intention of relinquishing the throne now; not even to Mother Earth.

So while it appears that environmentalism places man “on a level of absolute equality with nature in a relationship of interdependence;” its proponents even going so far as to propose initiatives (like legislation) that seem to affirm as much, what we are truly witnessing in the movement is rebellious man aggressively asserting his usurped “divinity” and the exaggerated sense of his dominion over all of creation that goes along with it.

In other words, environmentalism is inherently paradoxical.

You see, while it proposes to lower man to a place of equality with nature, it is only the man who exalts himself above all things, including God, who would dare lay claim to the authority to do so!

This, however, is just part of the picture.

Consider that God, as an act of the Divine will, not only established the hierarchy of the created order with man at its apex, He also established an order of right worship wherein man should rest in covenant with his Creator.

Rebellious man seeks to undo both of these orders.

With respect to the former, environmentalism is able to provide its followers with a reasonably satisfying illusion of achievement by establishing the criteria (e.g., via the laws by which society is regulated) for an opposing order that effectively disrupts the hierarchy of created things as God intends it. This is accomplished, in part, when rebellious man, by virtue of his own enthronement in the place of God, goes about asserting the right to determine the relative value of all things in the created order.

For example, if the man-who-becomes-God should declare that a tree frog is henceforth of more worth than an unborn child, then it must be so, and the laws of the land can even be made to reflect as much.

When it comes to the matter of worship, however, rebellious man has a bit of a problem.

Human beings are created for worship – of not just anything, however, but of something other than, and greater than, ourselves; namely, God.

As St. Paul said in his exhortation to the Greeks as given at the Are-op’agus:

And he made from one, every nation of men to live on all the face of the earth, having determined allotted periods and the boundaries of their habitation, that they should seek God, in the hope that they might feel after him and find him. (Acts 17:26-27)

While this inherent capacity and proclivity for worship was corrupted in the Fall and is often misdirected, it remains in man as a force to be reckoned with.

As such, the proponents of environmentalism propose to reorder creation even to the point of anointing the planet, its plants, and its animals as objects of worship.

In so doing, however, they necessarily undermine their own cause by devaluing mankind to the point where he can no longer consider himself God.

And yet, it is his overblown sense of his own sovereignty – even to the point of harboring delusions of divinity – upon which the rebellious man must rely as justification for re-ordering the hierarchy of creation in the first place.

This is the environmentalist paradox, and it’s a direct fruit of the magnificent lie that was first told, believed, and acted upon in Eden.

Oh, how Our Lord must look with pity upon the hapless fools who adhere to the tenets of environmentalism!

Sadly, the patron of the desecrators of St. Peter’s Basilica on the Feast of the Immaculate Conception, the current Bishop of Rome, is among them.

It is a horrifying reality to consider to be sure, but far from surprising.

After all, Francis is on record as declaring that, for him, Pope Paul VI was “a guiding light.”

He also happens to be the first claimant to the Chair of St. Peter who was formed entirely in the ways of the Second Vatican Council; that unprecedented détente between the leaders of the Holy Catholic Church and the “religion of man who makes himself God.”

No, nothing under the sun is new, indeed.

Pope Francis, the Divinization of Change, and the New World Order