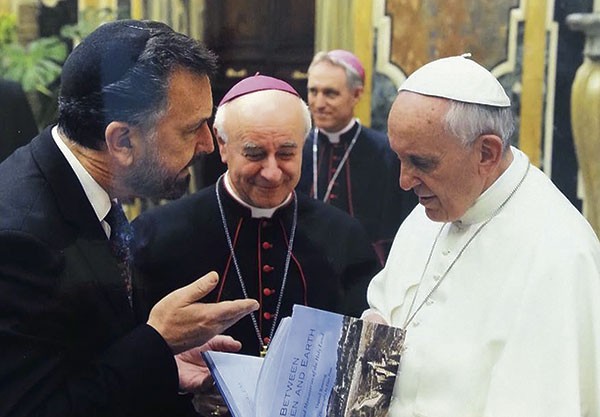 Apparently, the “diabolical disorientation” of which Our Blessed Lady forewarned Fatima seer Sr. Lucia is contagious.

In a recent essay published by Religion News Service, Rabbi David Rosen, one of the Holy See’s most highly-favored Jewish dialogue partners (pictured above), reflected on the sea-change in Catholic-Jewish relations since the promulgation of Nostra Aetate of Vatican II wherein he pondered the possibility of a similar turnabout taking place with the Muslims.

While they [Jewish-Muslim relations] are inevitably affected by the Israeli-Palestinian conflict, recall, however, that Islam had never denigrated Judaism in the way that Christianity had. We do not have to wait for a resolution of Middle East conflicts.

Perhaps Rosen has been too busy chatting it up with his cardinalatial pals to peruse the Qur’an; the “holy writ” of Islam that mandates the subjugation, taxation, and ultimately the slaughter of infidels like himself.

In any case, Rosen is correct in categorizing the conciliar approach to Catholic-Jewish relations as nothing short of a “revolution.”

Indeed, there may be nothing in human history that quite parallels such an amazing transformation. A wondrous achievement in itself, the revolution in Catholic-Jewish relations also suggests something more universal about relationships between religious communities.

And from where did he get an idea like this?

Speaking on the 50th anniversary of Nostra Aetate in 2012, Cardinal Kurt Koch made a similar assessment of the Council, saying:

With regard to the reception history of Conciliar documents, one can without doubt dare to assert that ‘Nostra Aetate’ is to be reckoned among those Council texts which have in a convincing manner been able to effect a fundamental re–orientation of the Catholic Church following the Council.

You see, Rosen’s biggest mistake is an unfortunately common one; he actually believes the nonsense that has been flowing from the lips of such champions of inter-religious dialogue as Cardinals Walter Kasper, Kurt Koch, and Jean-Louis Tauran (to say nothing of the occupants of the Chair of St. Peter) over the last several decades.

As such, the poor rabbi is unable (as are most Catholics) to discern between the immutable faith of the Church and the Council-inspired rubbish that has marked Catholic-Jewish “dialogue” (among other things) in the years since its closing.

For instance, Rosen, having taken Cardinal Koch’s words to heart, sincerely believes that the Holy Catholic Church, after nearly 2,000 years, has officially “re-oriented” herself away from the divinely inspired teachings of St. Paul who said that Christ “abolished in His flesh the law of commandments and ordinances.” (cf Eph 2)

In his essay, Rosen therefore feels entirely justified in claiming that the Council “affirmed the unbroken and eternal covenant between God and the Jewish people.”

Is there anyone in Rome today officially involved in Catholic-Jewish dialogue who still possesses the faint heartbeat of Apostolic zeal necessary to state the plain truth that it was the Jewish people themselves who broke the covenant between themselves and God when they rejected Jesus Christ; thereby rejecting God Himself?

If there is, it certainly isn’t Cardinal Koch who said:

It does not necessarily follow that the Jews are excluded from God’s salvation because they do not believe in Jesus Christ as the Messiah of Israel and the Son of God.

Many of the faithful have grown numb to such pronouncements, but truly this is nothing short of breathtaking; a Prince of the Church (with the obvious approval of the pope’s at whose pleasure he has served) proclaiming that faith in Jesus Christ is not necessary for “God’s salvation.”

Before we move on, let’s talk about this peculiar phrase, “God’s salvation.”

As far as I can tell, it’s a novelty to speak of “God’s salvation” in Catholic circles; a phrase that seems to have originated in the magisterium of Pope John II, only to be employed years later in the Catechism of the Catholic Church, and now comfortably repeated by “inter-religious” mavens like Cardinal Koch.

So, what’s the problem; after all, salvation really is of God, right?

The problem lies not so much in the phrase itself but in its apparent purpose; namely, it serves to obfuscate the objective truth that salvation is only of Jesus Christ and the Holy Catholic Church that He established.

In the present case, speaking of “God’s salvation” relative to the Jews gives them the false impression that there is a salvation from God that encompasses more than that which is made available through Jesus Christ and His Church.

The bottom line impression being that conversion to the one true faith is of no real import.

The bottom line impression being the same; conversion to the one true faith is of no real import. (Are you seeing a trend in post-conciliar – aka Council-inspired – thought and therefore behavior?)

Returning now to Cardinal Koch’s assault on the Catholic faith, he stated:

Such a claim [that Jews are ‘excluded from God’s salvation because they do not believe in Jesus Christ’] would find no support in the soteriological understanding of St Paul, who in the Letter to the Romans definitively negates the question he himself has posed, whether God has repudiated his own people: “For the grace and call that God grants are irrevocable” (Rom 11:29).

For today’s merry band of modernists, misappropriating Sacred Scripture is just another day at the office.

Nostra Aetate itself played fast-and-loose with the inspired Word en route to its own undermining of the true faith. (See my recent video on the subject.)

The question concerning the standing of the Jews vis-à-vis “God’s salvation” has never, properly speaking, been about whether or not “God has repudiated His own people.”

Of course God’s call is irrevocable; at least until such time as one departs from this life. So too is the offer of grace necessary to answer that call.

Oh, yea, there’s that; the necessity of responding…

This is where spineless poseurs in Catholic clerical garb (like Cardinal Koch) reveal themselves to be little more than glad-handing religious diplomats; bearing little resemblance to the authentic evangelists of old who, like St. Peter, did not shy away from letting the Jews know, for their own good, that it is they who “repudiated” their God.

Undaunted, Cardinal Koch takes up the weapon of phony Biblical citations once more as he continues:

That the Jews are participants in God’s salvation is theologically unquestionable, but how that can be possible without confessing Christ explicitly, is and remains an unfathomable divine mystery. It is therefore no accident that Paul’s soteriological reflections in Romans 9–11…

The willingness of modern prelates to manipulate Scripture to suit their own ends is positively Lutheresque.

In his Epistle to the Romans, St. Paul makes it plain that the Jews who reject Christ are “broken off” from the people of promise:

They were broken off because of their unbelief, but you [Gentile believers] stand fast only through faith. So do not become proud, but stand in awe. For if God did not spare the natural branches, neither will he spare you. Note then the kindness and the severity of God: severity toward those who have fallen, but God’s kindness to you, provided you continue in his kindness; otherwise you too will be cut off. And even the others, if they do not persist in their unbelief, will be grafted in, for God has the power to graft them in again. (Romans 11:20-23)

St. Paul’s words are very clear; the unbelieving Jews have been “cut off,” and “persisting in their unbelief” will effectively prevent their being “grafted in” once more.

So much for the conciliar proposition set forth in Nostra Aetate that states:

Indeed, the Church believes that by His cross Christ, Our Peace, reconciled Jews and Gentiles, making both one in Himself. (NA 4)

Truly this nonsensical proposition that believers in Christ are somehow one in Him with those who reject Him is exactly what Cardinal Koch stated; “a fundamental re–orientation of the Catholic Church.”

The question is: In what way is this “re-orientation” even remotely justifiable as an integral part of Catholic tradition?

The simple truth is that it is not.

T minus one week…