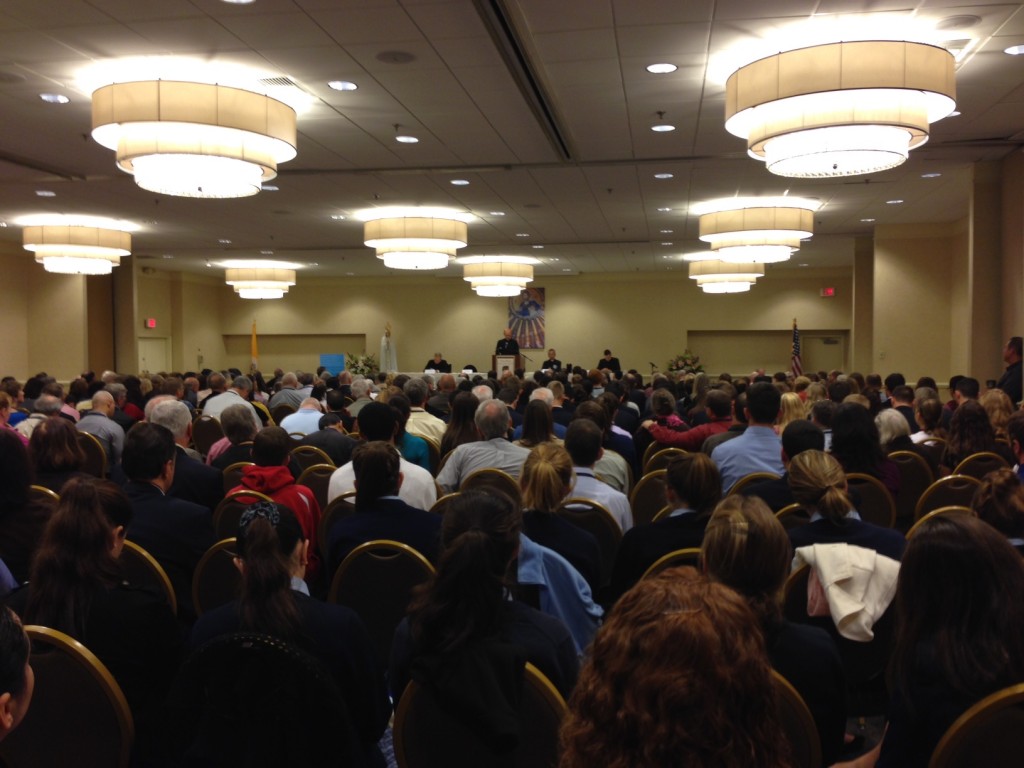 As I write, I’m at the Angelus Press Conference for Catholic Tradition in Kansas City (pictured above); a gathering under the auspices of the Society of St. Pius X.

Here, one will not hear clerics speaking of a supposed dichotomy between the immutable doctrines of the Holy Catholic faith and their “pastoral application,” as if to invite a situation wherein the latter is effectively allowed to undermine the former.

Also as I write, in Rome, an Extraordinary Synod is assembled to discuss matters concerning marriage and family, with an appreciable number of the bishops there present Hell bent on doing just that.

The interventions that have been made at the Synod thus far have been well circulated, and so it is not necessary to reiterate them here.

Let it suffice to say that Catholics of good will have every good reason to be concerned that the outcome will be a tragic assault on divine truths in the practical order even as official statements disingenuously pay lip service to the same.

Those bishops behind this assault have been labeled by some as “Kasperian” in their leanings, but let us not deceive ourselves for even a moment longer; such a label is entirely deficient in that it serves only to identify a figurehead, when indeed it is the humble pope himself who is driving the rebellion.

Many Catholics are praying that the Synod will, over and against the designs of the Bergoglian sect, ultimately reaffirm the doctrine of the faith with regard to such matters as the indissolubility of marriage, the inability of those who persist in manifest grave sin to approach the sacraments, and the recognition of the gravely disordered nature of homosexual acts.

I, however, am praying for the exact opposite.

To be more specific, my prayer is that the wolves who so craftily seek to destroy the Church from within by guile will, inspired in the knowledge that the pope himself is their ally, therefore shed all pretense; bringing undeniable clarity to the reality in which we presently live:

One may either accept the modernist ravings of the current Bishop of Rome, and in so doing objectively abandon the Faith that comes to us from the Apostles, or one may reject and denounce them; thus remaining true to what is authentically Catholic.

There is no in between. As Our Blessed Lord said, one is either with Him or against Him.

As it is, there are those in Catholic media who, knowingly, it would seem, play the middle as a means of self-preservation.

Such individuals have become adept at tap dancing around the bitter truth that Pope Francis represents perhaps the greatest obstacle to the mission of the Church in our day, with the preponderance of his public discourse daily leading souls to perdition, unworthy as it is of even a sincere heretic much less a faithful Catholic.

Others with a public voice are more aggressive in their profiteering.

In fact, one particularly carnivalesque cleric, adorned in liturgical finery no less, even goes so far as to make sport of the current crisis by attacking the few who have never wavered in upholding tradition; all in a transparent attempt to assuage the hate-filled insecurities of a bitter benefactor, the cha-ching of his shekels more pleasant to his egotistical ears than the dulcet tones of unadulterated truth.

In addition to such men as these who should most certainly know better is a large swath of the flock that is genuinely confused; sincere children of the Church who, in their innocence, still behave as if the Holy Father and those bishops who have joined his cause can be trusted to dispense only that which is nourishing for the soul.

Should the Synod succeed in crafting a highly nuanced message that in one breath reaffirms the faith whilst institutionalizing its practical denial in the other, the cancer that currently infects the Mystical Body of Christ on earth will continue to claim victims, a large portion of whom are being attacked unwittingly.

If, however, the Bergoglian actors at the Synod ultimately abandon the faith; howling their hatred of Christ in the full light of day, (and let us be honest, that is precisely the case for such men) the time of choosing on the part of all concerned will be at hand.

This means that priests, bishops and cardinals, if for no other reason than fear of eternal damnation, will be forced to stand up and say, No, we will not follow!

In truth, already we have arrived at the point where it is only with great difficulty that one of good will can deny that Pope Francis is not simply a ruthless proponent of the waste that flows from the mouth of Walter Kasper like so much vomit, he is, in a very real sense, its author.

Francis has been plainspoken about the degree to which he abhors the sure doctrine and discipline of the Church and those who love it almost from day one.

Speaking to Fr. Anthony Spadaro, S.J. in September of 2103, in his first of an ungodly number of soul-baring interviews, he said:

“The church sometimes has locked itself up in small things, in small-minded rules… There are ecclesiastical rules and precepts that were once effective, but now they have lost value or meaning. The view of the church’s teaching as a monolith to defend without nuance or different understandings is wrong.”

And what does he mean by nuance?

“The church’s pastoral ministry cannot be obsessed with the transmission of a disjointed multitude of doctrines to be imposed insistently.”

Clearly, he means to say that human beings cannot be held accountable to the eternal truths of the faith, for such would amount to “imposing” upon the lives of weak and sinful men; while “nuance,” meaning, the acceptance of sin, is the height of “pastoral” praxis.

Like most modernist prattle, the exact opposite of what Pope Francis is saying is true.

When the Church in her hierarchy fails to transmit the faith in such way as to “insist,” with the love and the patience of a true Mother, that the path of truth is the solitary means of attaining to one’s ultimate end and fulfilment, it is then that the doctrines of the Church become “disjointed;” removed as they are from the concrete reality of a life wherein each is called to “work out his salvation in fear and trembling.”

As it concerns marriage in particular, Pope Francis said some interesting things in this same interview:

“I also consider the situation of a woman with a failed marriage in her past and who also had an abortion. Then this woman remarries, and she is now happy and has five children. That abortion in her past weighs heavily on her conscience and she sincerely regrets it. She would like to move forward in her Christian life. What is the confessor to do?”

Can there be any doubt whatsoever that even as Francis spoke, his front man, Walter Kasper, was already busy about the task of preparing the intervention that he would give five months later at the Extraordinary Consistory in Rome; a proposal that he publicly affirmed was crafted “with the pope’s approval?”

In any event, look very closely at the pope’s words above about this “woman with a failed marriage.”

Notice how he so cavalierly states that “this woman remarries,” when in truth no such thing is possible apart from the death of her spouse or an annulment, in which case she doesn’t have a “failed marriage” in the first place.

Notice as well his reference to an abortion that “she sincerely regrets.”

One wonders why he feels compelled to introduce abortion into the picture? Are there women confessing the sin of abortion in the Church today who are somehow being prevented by dictatorial confessors from “moving forward in the Christian life”?

Perhaps this is just a case of an elderly man who lacks the mental acuity to stay on point. Then again, it would seem far more likely that these are the well measured words of a man who, knowingly or not, is doing the bidding of the Adversary who seeks to confuse.

One notes the rhetorical question that is raised, “What is the confessor to do?”

And yet, when the topic of marriage and family is floated, totally absent from the Bergoglian faction and their humblest of leaders is the call to return to the Church via the confessional; an act that would require a firm purpose of amendment to cease persisting in grave sin.

In other words, deliberate or not, this convoluted treatment is truly nothing more than an appeal to emotion; one that is in perfect keeping with the tenor of the Synod Fathers who also speak of doctrine and discipline as if the latter stands independent of the former.

Pope St. Pius X understood well that the modernists of his day were wont to deny the inextricable link between the divinely revealed doctrines of the Church and those disciplines that convey them.

Hence the triple authority in the Catholic Church, disciplinary, dogmatic, liturgical. The nature of this authority is to be gathered from its origin, and its rights and duties from its nature. In past times [according to the modernists] it was a common error that authority came to the Church from without, that is to say directly from God; and it was then rightly held to be autocratic. But this conception had now grown obsolete. For in the same way as the Church is a vital emanation of the collectivity of consciences, so too authority emanates vitally from the Church itself. Authority therefore, like the Church, has its origin in the religious conscience, and, that being so, is subject to it. Should it disown this dependence it becomes a tyranny.

Enter the Synod of 2014, wherein the Bergoglian offensive, predicated upon a false “mercy” that has not its origins in God, but rather in the religious conscience of the people themselves, is apparently poised to show the truly faithful what tyranny really is.