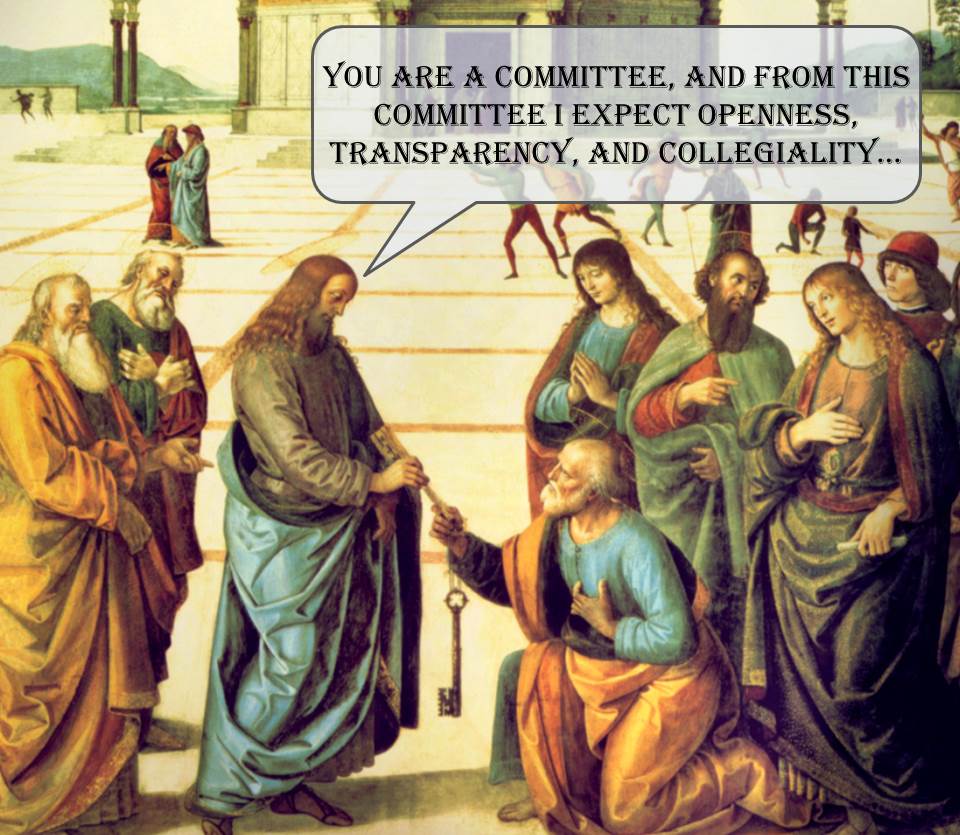 A petition drive is presently underway calling for a “Synod Walkout” on the part of “every faithful Catholic bishop” currently participating therein. As of this writing, nearly 2,000 persons have signed it; including any number of individuals for whom I have a great deal of respect.

Even so, it is my opinion that walking out, while perhaps symbolically meaningful, is not nearly enough. This being the case, and for a number of other reasons, I have no plans of adding my own name.

Please allow me to explain further.

Most everyone is familiar with the phrase “fight or flight;” a simplistic term used to describe one’s potential responses when confronted with an approaching danger.

In the Church Militant, flight simply isn’t an option for those Successors to the Apostles who fully embrace the duty to protect their flock even unto death, and even more so, when the risk of remaining on the battlefield, fighting with all of the weapons afforded by truth, is little more than the veritable death of an ecclesial career.

As it concerns the current Synod of Bishops, one of the flaws to be found in the petition itself lies in the following statement:

Therefore, we faithfully request that each and every faithful Catholic bishop at the Synod, having made every effort to resist these attacks on Christ’s teaching, if its direction remains unaltered and those faithful voices remain unheard, do his sacred duty and publicly retire from any further participation in the Synod before its conclusion so as to prevent greater scandal and confusion.

Setting aside the obvious question as to how a walkout will assure anything other than the Synod’s direction remaining unaltered, the fact of the matter is that “every effort” most certainly has not been made to protect the sheep from the present attack on the part of ‘every faithful bishop;” indeed, far from it.

Ravenous predators such as these are circling the sheepfold; frothing at the mouth and licking their chops.

Let us be clear, however, is no ordinary collection of carnivores seeking only to satisfy their individual hunger; rather, each one plays but a small role in a much larger, well-organized, plan.

To date, far from “making every effort” in defense of the sheep, even the most celebrated of the Synod shepherds has failed in his duty to identify for the faithful the leader of said pack; a wolf named Bergoglio.

As the petition states:

Several high-ranking Cardinals have brought concerns to the Pope, only to have them summarily dismissed as unworthy of consideration – with unfair accusations against those who are legitimately concerned that their voices will not be heard.

The time for private letters to the pope passed long ago as his hand in publishing the interim relatio of Extraordinary Synod 2014 most surely demonstrates.

Furthermore, the petition, in spite of the undoubtedly good intentions of both its authors and its signatories, also fails to inspire in the following lament of the “regular changes to the rules governing the current synodal process.”

This revised process also appears to reject openness, transparency, and collegiality, and the committee drafting the final document of the Synod seemingly rejects any substantive input from the Synod fathers.

It is as if the petition intends to suggest that one does well to accept the reality of the Synod as an authentic expression of the sacred Magisterium according to the hierarchical structure with which Our Blessed Lord endowed His Church.

In truth, it is nothing of the kind.

Our Lord most certainly did not establish a Church governed by “committee.” Indeed, no sacred obligation exists on the part of the hierarchy to practice “openness, transparency, and collegiality,” as the petition implies.

The Holy Catholic Church, by the will of her Founder and Head, is monarchical, by contrast, with Sovereign authority uniquely vested in the pope through whom Christ the King reigns vicariously.

Speaking of which, the present day Synod of Bishops was instituted by Pope Paul VI of most bitter memory with the Apostolic Letter, Apostolica Sollicitudo, which establishes among its purposes:

The undeniable truth is that there are no “essential matters of doctrine” about which legitimate disagreement exists. As such, the very idea of such a Synod is untenable; regardless of the parliamentary rules by which it proposes to function.

This is even more obviously the case given the pretenses under which the current Synod on the Family has been convened as any number of the topics under discussion (namely, the plight of the civilly divorced and remarried, the cohabitating, and those in homosexual unions with respect to their access to the Sacraments) simply are not up for debate.

This recognition perhaps invites supporters of the petition to insist all the more that the faithful Synod bishops should be called upon to walk out of the assembly, and yet such a counter argument reflects at least tacit support for my own position; namely, that walking out, in spite of whatever symbolic value it may have, is not nearly enough.

In fact, I would say that walking out, apart from other far more important actions, is cowardly.

Simply put, the truly faithful bishop, whether he chooses to remain in the Synod hall or not, cannot avoid the duty of alerting the faithful to the real threats that exist with respect to their Catholic faith, and ultimately their salvation; boldly naming names and condemning their evil proposals – the way intrepid churchmen used to address such attacks.

These threats so deserving of condemnation include:

– The Second Vatican Council: The confusion it engendered concerning the primary ends of marriage and its convoluted treatment of the College of Bishops and its resident powers.

– Pope Paul VI and the loss of faith he demonstrated in establishing the Synod of Bishops for the purpose of debating “essential matters of doctrine;” a recognition that forces one to call into question the validity of his having been “beatified.”

– Lastly, and perhaps most importantly, the undeniable danger to the faithful that resides squarely in the person of Pope Francis, the same who convened the Synod to debate “questions” that are beyond reproach.

We can add to this list, if we wish to be thorough, the Novus Ordo Missae, which Fr. José Miguel Marqués Campo so brilliantly demonstrated in a recent post as having invited a disregard for the natural order in favor of doing things “our way” instead of God’s way.

All of this having been said, I am certain that even those who already signed the petition will readily insist, along with me, that Our Lord did not establish a Church, the direction of which is to be guided by petition.

If only for this reason alone, I have never been very keen on petitioning the pope or other members of the sacred hierarchy as the effort, in spite of pure intentions, inevitably smacks of democracy.

These are extraordinary times. I can understand why one, moved by a desire to do something in defense of the faith, might sign the petition in question just the same.

I trust that those who did will likewise understand why I will not be joining them.

Time for an intervention?

Bring back the Oath Again Modernism