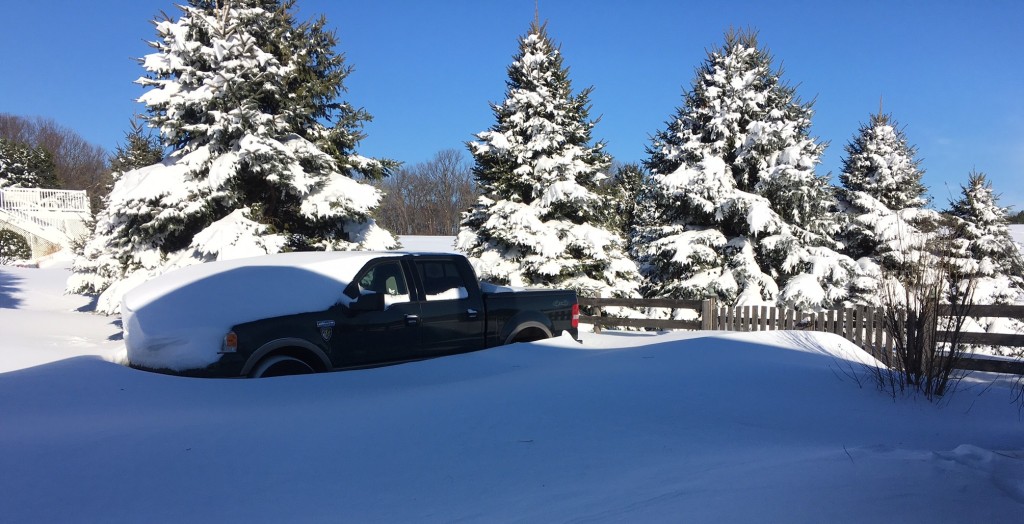 This past the weekend, as many of you know, Blizzard 2016 dumped over two-and-a-half feet of snow on the area where I live, about 30 miles northwest of Baltimore.

Last winter, after shoveling my driveway and sidewalks by hand on two separate occasions, I vowed to bite the bullet and purchase a snow blower just like the rest of my neighbors. I didn’t, and the rest is history.

This time around, however, it was pretty obvious from the forecast that my shovel wasn’t going to get the job done.

That was a problem, not so much for me since I work from home, but for my wife, Jamie, who works at a hospital. Calling out isn’t an option for her, and demand on local snow removal businesses was so high that, even though I tried, getting one of them out here wasn’t guaranteed.

By Sunday morning the storm had passed, and as you can see from the photo above, it was beautiful outside. Maybe it was the largely white backdrop, but the sky has never appeared bluer to me.

Anyway, with shovel in hand, out I went.

After more than an hour of steady labor, I had managed just to make a path to my truck and clear it off.

Time for a breather…

I grabbed the bottle of water that I had stuck in a mound of snow, took a drink, and started thinking about Holy Mass. This was the first Sunday in nearly twenty years that I couldn’t get there. It just didn’t feel right.

At that moment, my friend Gary, who died last year unexpectedly at the age of 50, crossed my mind. I always make it a point to pray for the repose of his soul at Mass. This day, I couldn’t. Damned snow.

Looking skyward into all that blue, I held him up to Our Lady and began praying, Ave Maria, gratia plena…

As I neared the end of my prayer, behind me, the hum of my neighbor’s snow blower started growing louder and louder. When I turned around, I saw Russ, who lives across the street, standing at the end of my driveway; snow-eating beast in hand.

“Can I help clear this off for you?”

A normal person would have jumped for joy and shouted, “Heck yea!”

I hemmed and hawed and let him know that I was still hoping that the snow removal guy I tried to line-up would call me back, and yada, yada, yada…

I’m not sure how I got this way. Maybe it’s a typical guy thing, but just the thought of asking for help, with anything, is enough to make me cringe.

Russ, good neighbor that he is, wasn’t going to take no for an answer.

As he began making real progress, I resumed shoveling around my truck; one back wrenching scoop at a time.

I really could have stopped and just let the snow blower get it, but standing there watching another guy clear my driveway – and one who refused to take even a dollar, at that – is about the only thing I can think of that would make me more uneasy than asking for assistance.

Within about five minutes, the solo hum of one snow blower turned into a chorus as John, who lives next door, showed up with his machine going full blast. Without saying a word, he made a thumbs-up and got to work.

Even with two productive snow blowers and one stubborn shoveler acting in concert, it took more than another hour to clear things to the point where I could drive Jamie to work the following morning.

Yea, she could have driven herself, but knowing how nervous she was about traveling the still covered back roads leading to the highway at 5 am, I decided to do the husband (chauffeur) thing.

Returning back home after dropping my wife off, I knew what was coming next. I’d seen this movie before…

Just hours before I had to head back to the hospital, the State Highway Administration plow made another pass on my street. The opening that was once at the end of my driveway was gone. In its place was a fortress-worthy wall of wet snow and ice; the kind that murders snow blowers (and sometimes middle-aged men).

Shovel in hand, out I went again.

No exaggeration; a full scoop of that stuff had to weigh more than fifty pounds.

Now, I’m no physical beast by a long shot, but a fifty pound bag of charcoal or dog food or concrete? I can toss that into the back of my truck, no problem. Putting that bag on a plank attached to the end of a four foot long handle and attempting to throw it any meaningful distance is another story though.

Clearly, brute strength wasn’t going to suffice. I had to outsmart that wall. It was wheel barrow time. After packing it up to full capacity (about five good scoops), I was then able to wheel it down the street a ways and dump it off to the side.

After about ten loads or so, I did a little math in my head. At this rate, provided the wall didn’t claim me as a casualty, I figured I should be able to get Jamie from the hospital only a couple of hours after her shift ended. I needed to give her a heads up.

At this, I once again heard the sound of an approaching engine. This time it was my neighbor Brian who lives up the street on his Kubota tractor with bucket attached; a serious piece of machinery built as much for construction as anything.

After a predictable (for me, anyway) amount of hemming (though I managed to stop short of hawing this time), not only did Brain make quick business of reopening the driveway, he even created access for the postal carrier to get to my mailbox.

Now my bills can keep coming. What a relief.

The lessons contained in this story are evident.

– Even those of us who have to travel a bit to attend a traditional liturgy sometimes take access to Holy Mass for granted.

I can’t even imagine what it’s like to live in a place where the Mass is truly rare, but I should try harder to do just that.

– Good neighbors are a great blessing.

Other than buying three cases of beer for these guys, I hope to have a chance to return their kindness; in fact, I need to make it my business to look for that opportunity.

– God calls very few of us to the life of a hermit.

Self-sufficiency is a good thing, but more often than not, it’s an illusion.

Logically, in my head, I get it – asking for help isn’t always a sign weakness. Sometimes, it’s a sign of strength born of the determination to accomplish the things we find truly important. I have a long way to go on this note.

With this last lesson in mind, difficult as it may be, I’m going force myself to keep the hemming and hawing down to a minimum here and get right to it:

I’m in serious need of some financial help to keep the effort we’ve undertaken here going. I actually need help digging out just enough to keep the lights on and food in the house – forget buying a snow blower! Truth is, I should have declared a state-of-emergency some time ago.

A well-informed adviser once told me that I need to include an “ask” for donations in every single post, place multiple ads for financial support on every page, send out regular fundraising emails to all registered users, share more of the private correspondence that I continue to get from priests and others expressing their gratitude for what we do along with a plea for funds, and so on…

I get it, and maybe I’ll do these things in time, but it just isn’t me.

The reality is, the future of this effort all comes down to whether or not enough of our regular readers believe that this blog, its growing list of contributors, and the incredible resource that is our commenters is worthy of financial support. Only you can answer that question for yourself.

Lastly, I can’t even begin to express the depth (no pun intended) of my gratitude for the help that some of you have already given, and continue to give. In all sincerity, I honestly don’t know how to convey my appreciation other than to continue plugging away in defense of our Catholic faith as best and as faithfully as I can.

I hope it goes without say that every one of your intentions are in my prayers; along with a heartfelt prayer for no more snow.

“It can no longer simply be said…”

How would Garrigou-Lagrange view the conciliar carnage?