Scrupulosity: A condition wherein an individual tends toward an obsessive conviction that they are guilty of a given sin even after receiving valid absolution and / or they tend to impute a far greater degree of gravity to their venial faults than prudence would suggest.

The Catholic Encyclopedia speaks of “special indications that persons are really scrupulous” as including “a certain rooted attachment to their own opinion which makes them unwilling to abide by the judgment of those whom they consult, even though these latter have every title to deference.”

With this in in mind, I’d like to tell you about a related spiritual condition wherein one tends to view others with a scrupulous eye. Let’s call this particular malady “scrupulosity projected,” or SP for short. (Not to be confused with Summorum Potificum!)

How does SP manifest? 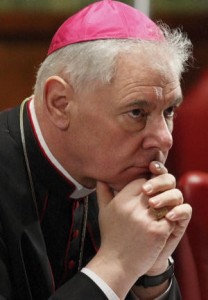 A good real world example is Archbishop Gerhard Müller relative to his treatment of the SSPX.

In an interview last fall, Archbishop Muller said of discussions between the Holy See and the SSPX, “I wouldn’t call it a dialogue between two Church partners.”

Unfortunately, the interviewer failed to ask an obvious follow-up question; namely, what exactly is a “Church partner,” and why is the SSPX disqualified from being considered one?

The Archbishop gave what presumably would have been his likely answer when he said of the Society, “Part of the problem is that, after 30 or more years of separation from the Church, some groups or persons can be very closed in their own dynamic, in their own groups, and very fixed on these points.”

Thirty years of separation? Not according to my calculations.

In 1988, Archbishop Lefebvre consecrated three bishops without papal mandate, and so he, co-consecrator Bishop Antônio de Castro Mayer, and the three priests who were consecrated incurred the penalty of “excommunication,” the formal term for suffering “separation” from the Church.

In 2009, some twenty-one years later, Pope Benedict XVI lifted said excommunication; i.e., the Holy Roman Pontiff, the same who appointed Archbishop Müller to his post as Prefect for the Congregation of the Faith, removed from them the state of “separation.”

Even so, Archbishop Müller apparently struggles to accept the judgment of his superior in the matter.

In any event, let’s now examine why, in the archbishop’s estimation, these not-quite-partners find themselves in this “separated” position.

Speaking of their differences over an authentic interpretation of Vatican Council II, Archbishop Müller said, “The SSPX must … accept the position of the Pope as stated in the First Vatican Council. They must also accept the doctrinal pronouncements made since the Second Vatican Council, which have been authorized officially by the Pope.”

So, what does Vatican I have to say about the Pope?

Well, for one thing, it states:

Since the Roman pontiff, by the divine right of the apostolic primacy, governs the whole church, we likewise teach and declare that he is the supreme judge of the faithful, and that in all cases which fall under ecclesiastical jurisdiction recourse may be had to his judgment. The sentence of the apostolic see (than which there is no higher authority) is not subject to revision by anyone, nor may anyone lawfully pass judgment thereupon.

This is particularly interesting given the archbishop’s insistence, contrary to the actions of Pope Benedict XVI in 2009, that the Society is “separated” from the Church and has been for thirty years running.

Archbishop Müller went a little further, saying, “They [SSPX] need to accept the complete doctrine of the Catholic Church: the confession of faith, the Creed, and also accept the magisterium of the Pope as it is authentically interpreted.”

For the record, I’m not a member of the SSPX, neither am I their spokesman or apologist, but I do have enough knowledge of what they profess to say that Archbishop Müller provided no specific evidence that the SSPX denies even the smallest portion of “the complete doctrine of the Catholic Church” for one simple reason; there isn’t any.

Of course, this is not so much a matter of “scrupulosity projected” as it is calumny, but it is noteworthy in that it presumably sheds light on why Archbishop Müller feels justified in speaking of the SSPX as though the excommunication has never been lifted.

He went on to give greater insight into his thought process, such as it is, saying, “Vatican II is an official ecumenical council, and all that was said in the Council is therefore binding for everyone, but at different levels.”

Did you get that? “All that Vatican II said” is binding!

Perhaps the archbishop missed the “Notification” given by the Secretary General of the Council, Archbishop Pericle Felici, on November 16, 1964, published in the appendix of Lumen Gentium as follows:

A question has arisen regarding the precise theological note which should be attached to the doctrine that is set forth in the Schema de Ecclesia and is being put to a vote … On this occasion the Theological Commission makes reference to its Declaration of March 6, 1964, the text of which we transcribe here: “Taking conciliar custom into consideration and also the pastoral purpose of the present Council, the sacred Council defines as binding on the Church only those things in matters of faith and morals which it shall openly declare to be binding. The rest of the things which the sacred Council sets forth, inasmuch as they are the teaching of the Church’s supreme magisterium, ought to be accepted and embraced by each and every one of Christ’s faithful according to the mind of the sacred Council. The mind of the Council becomes known either from the matter treated or from its manner of speaking, in accordance with the norms of theological interpretation.

With Archbishop Felici’s notation above in mind, guess how many “things in matters of faith and morals” the Council “openly declares to be binding?”

Precisely zero. So, even though Archbishop Müller considers himself justified in speaking of the SSPX as if they are separated from the Church for their failure to accept as binding “all that was said in the Council,” when according to Archbishop Felici, no such obligation exists!

This is yet another example of Archbishop Müller’s refusal to accept the judgment rendered by one who has “every title to deference” in the matter.

Does this mean that nothing the Council states is binding? No, it simply means that every conciliar statement that is binding on Catholics, lest they risk formal separation from the Church, is binding thanks to the doctrinal weight such statements possessed even before the Council.

This also means that it cannot be said that those who embrace all that the popes and ecumenical councils proposed for our belief before Vatican II are now somehow “separated” from the Church in its aftermath. This includes, of course, the Society of St. Pius X, who labor in the Church as true sons in spite of the injustice of doing so under a canonically irregular status.