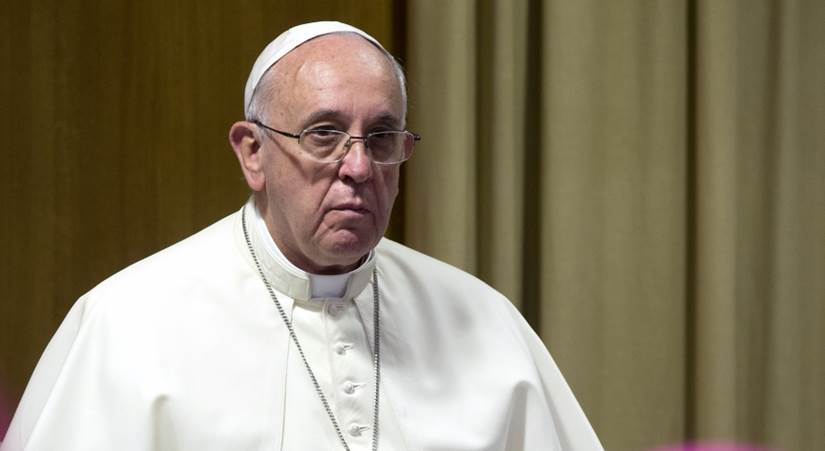 From the moment the current Synod of Bishops commenced, Catholics the world over, including any number of bishops and cardinals, have been attempting to evaluate Pope Francis’ intentions by focusing almost exclusively on the debate concerning Holy Communion.

It occurs to me that one of the best ways to decipher the mind of the present pope and his desires for the Church moving forward, while keeping the activities of the Synod in their proper perspective, is to listen very carefully to what he had to say in a recent sermon given at Santa Marta; a venue wherein he often speaks his mind freely.

On Wednesday, October 14, as the Synod hall was still reverberating with the aftershocks of the earthquake created by the Letter of Thirteen, one of its highest profile signatories, George Cardinal Pell, stood and addressed the assembly.

He reminded his brother bishops that their “first episcopal task” is to teach; to “explain and defend the apostolic tradition of faith and morals … as interpreters of the great mystery of God’s love and forgiveness.”

Cardinal Pell then took direct aim at the Trojan Horse (more properly, Bergoglian) that was intentionally crafted to usher the Kasperian Proposal into the very heart of the Church; namely, license masquerading as “mercy.”

Too many have lost confidence in Jesus’ doctrines and doubt or deny that mercy is found in his hard moral teachings. The crucified Jesus was not afraid to confront society, and he was crucified for his pains, teaching his followers that life is a moral struggle that requires sacrifices, and his followers cannot always take the easy options.

Jesus was not afraid to confront society…

One can almost imagine Cardinal Pell looking directly at the “who am I to judge?” pope as these words were spoken, and even more so as he went on to say:

He [Jesus] did not tell the adulterous woman to continue in her good work but to repent and sin no more. The prodigal son ­acknowledged his sins before he returned home. While we have many theologians, we have one faith and one set of official doctrine.

Cardinal Pell could just as easily have said, “With all due respect, Holiness, your countless pleas for ‘random acts of kindness’ are a poor substitute for the call to conversion.”

The following morning, it became obvious that Pope Francis had taken notice.

In his sermon given at Santa Marta, the Bishop of Rome seemed to seize upon Cardinal Pell’s suggestion that the episcopate is called to act as “interpreters of the great mystery of God’s love,” saying:

One of the hardest things for all of us Christians to understand is the free gift of salvation in Christ”, because there have always been ‘doctors of the law’ who mislead by limiting the love of God to ‘small horizons’, when instead it is something ‘immense and boundless’.

Pope Francis then attempted to turn the tables on Cardinal Pell relative to his call to defend the “apostolic tradition of faith and morals,” otherwise known as doctrine.

As reported by Vatican Radio:

Where did St. Paul’s malaise [better translated, agitation] come from? Francis said the answer was that the Apostle “defended the doctrine, was a great defender of the doctrine, and the annoyance came from these people who did not tolerate the doctrine”. Which doctrine? “The gratuitousness of salvation”.

This is the same Pope Francis who rails against “those who long for a monolithic body of doctrine” (Evangelii Gaudium) and “exaggerated doctrinal security” (interview with Anthony Spadaro, S.J.), and now he proposes to stand shoulder-to-shoulder with St. Paul?

In any case, that’s when things got all Protestant up in Santa Marta as Pope Francis launched into a good old fashioned “sola fide / once saved, always saved” rant:

Pope Francis [in reference to Romans 3:21-30] said that God “saved us gratuitously, and he saved all of us”. While there were groups who said: “No, he saves only that person, that man, that woman who does this, this, this and this … who performs these acts, who observes these commandments”. In this way, “that which is free, the love of God, according to these people whom Paul is speaking against”, ends up becoming “something we can obtain: ‘If I do this, God is obligated to give me salvation’. This is what Paul refers to as ‘salvation by works’”

As is his tendency, Pope Francis is twisting sacred Scripture to suit his own ends. Let us, however, be clear as to what the “Apostle to the gentiles” was actually saying.

St. Paul was “speaking against” those who failed to recognize the utter futility of the old law; continuing instead to behave as if adherence to its 613 commandments represents the pathway to salvation.

As he explained in his Epistle to the Ephesians, such persons deceive themselves as Our Blessed Lord “abolished in His flesh the law of commandments and ordinances” (cf Eph 2).

In other words, St. Paul could very well have been scolding any one of the post-conciliar popes, the Argentinian chief among them, who never seem to tire of kowtowing to the Jews, appeasing them with false assurances of salvation based upon the Old Covenant; despite their rejection of Jesus Christ.

Francis, not content to misappropriate the Scripture passage from Romans, went on to manipulate the teaching put forth in the Epistle of St. James wherein it is written, “faith without works is dead,” declaring:

“Perhaps we prefer not to understand it: we believe that the style of salvation in which ‘we do certain things and then we are saved’ is better’”. “Of course”, the Pope explained, “to do good, to do the things that Jesus tells us to do, is good and should be done”; but “the essence of salvation does not come from this. This is my response to the salvation that is free, that comes gratuitously from the love of God”.

In other words, Pope Francis is saying that even though we really ought to do what Jesus tells us, in the end, that’s not really necessary for salvation! As for the nature of “works” themselves, he is suggesting that those who simply “understand” and accept that God has already “saved us all” presumably just automatically do good.

Lest any among us still be so naïve as to imagine that the events unfolding at the Synod were not top of the pope’s mind as he spoke, he went on to leave little doubt:

In fact, the Pope remarked, these doctors of the law thought that you could only be saved by “observing all of the commandments”, while “those who did not do so were condemned”. In practice, Pope Francis said, with an evocative image, “they shortened the horizons of God as if the love of God were small, small, small, small, to the measure of each one of us”.

As if mentally fencing with the Synod’s opposition party (i.e., those who would dare to defend the Catholic faith), Francis offered a rebuttal in anticipation of their objections:

To those who might object and ask: “But father, are there not commandments?”, Francis replied: “Yes, there are! But there is one that Jesus says is basically a synthesis of all the commandments: love God and love thy neighbour”.Thanks to “this attitude of love, we are worthy of the gratuity of salvation, because love is free”.

Giving new meaning to the “Franciscan habit,” we once again see that this pope simply cannot help but twist sacred Scripture according to his own fancy; in this case, by boldly reducing what Our Blessed Lord identified as the “greatest commandment” (i.e., that which demands the conformity of one’s life to the Divine Law) to a mere “attitude.”

Note well that this affinity for sentiment over and against faithful adherence to the Church’s doctrines and disciplines is textbook modernism, just as Pope St. Pius X described it:

Religious formulas [pertaining to doctrine and pastoral practice], to be really religious and not merely theological speculations, ought to be living and to live the life of the religious sentiment. (Pascendi 14)

So, what are we to conclude from all of this?

While it makes perfect sense for faithful Catholics to focus intently on the debate concerning Holy Communion for adulterers and active homosexuals, if we really want to decipher the present pontificate and its vision for the Church moving forward, we must first come to terms with the fact that Pope Francis isn’t one of us; rather, he is a modernist.

This is especially necessary for any prelate who wishes to defend the faith such as it is under attack at the Synod under Francis’ watchful eye.

In other words, while authentic Catholics naturally expect the pope to “safeguard with the greatest vigilance the deposit of the faith delivered to the saints” (Pope St. Pius X, Pascendi Dominici Gregis), nothing could be further from Jorge Bergoglio’s mind.

As for the kinds of thoughts that really do occupy his modernist mind, Pope St. Pius X tells us that such men operate under the conviction:

In the religious sentiment one must recognise a kind of intuition of the heart which puts man in immediate contact with the very reality of God. They assert, therefore, the existence of a real experience, and one of a kind that surpasses all rational experience. (ibid.)

Doctrine, discipline, adherence to the commandments… These are but rational things to be surpassed; this is why Francis stresses the “attitude of love” in opposition to them.

The conclusions drawn from such thought should be clear:

What is to prevent such experiences from being met within every religion? … And with what right will Modernists deny the truth of an experience affirmed by a follower of Islam? With what right can they claim true experiences for Catholics alone? Indeed Modernists do not deny but actually admit, some confusedly, others in the most open manner, that all religions are true. (ibid.)

As Pope Francis said, “God saved us gratuitously, and he saved all of us,” and all indications are that he imagines that the entire human family, pagans included, is among the “us” that has already been saved as a fait accompli, a notion that even the Protestants reject.

So, you see, for Pope Francis, the Synod debate about Communion for the civilly divorced and remarried, those in homosexual unions and those who are cohabitating, is really only of secondary importance. Indeed, whether or not one is even Catholic is of little concern to him!

What really matters to Francis is that the discipline of the organization over which he presides, the Catholic Church, in no way stands as an obstacle between the “believer” and his ability to act on the “religious sentiment” that puts him in “immediate contact with the very reality of God” who has already “saved all of us.”

As for the reception of Holy Communion, to him this is simply an “experience” that all who but embrace the “attitude of love” deserve as much as anyone, and woe to those who would dare deny it to them.

This manner of thinking, in my estimation, is what makes Francis tick.

In his mind, he is in charge of a church that is but one religious expression among many, and he’ll be damned if it’s going to fail on his watch to take on the smell of the sheep and keep up with the signs of the times.

The value of the Synod, therefore, is simply this; it may just serve as a wake-up call for whatever faithful churchmen still remain; forcing them to view Pope Francis for what he truly is – a modernist – and by the grace of Almighty God, to act in the Church’s defense before he can do any more damage than he has already done.

The Sarah Affair: Instructive in the extreme