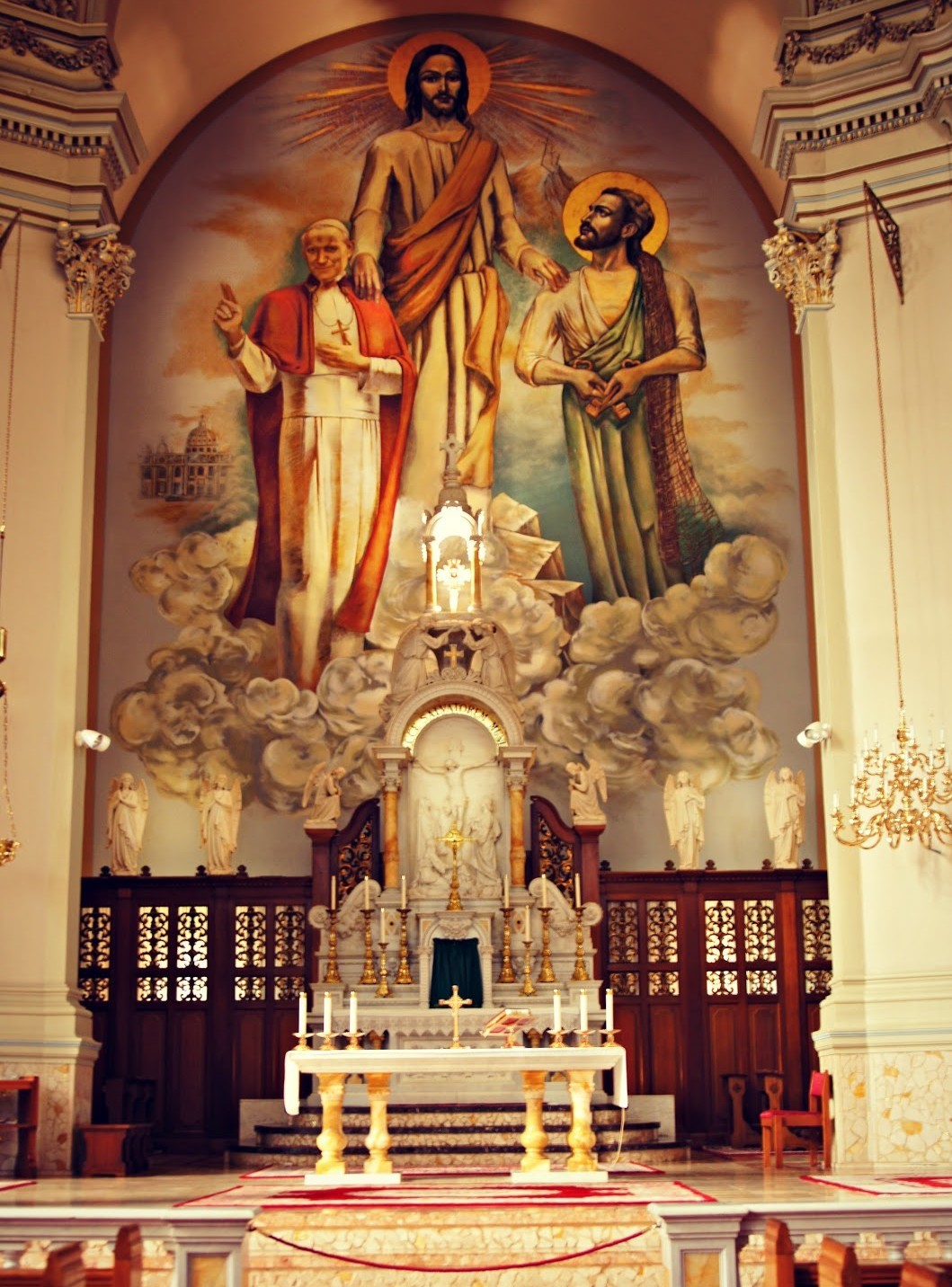 Above is a photograph of the sanctuary at St. Peter’s Catholic Church in the Diocese of Steubenville, OH where Holy Mass was celebrated for attendees of last month’s Catholic Identity Conference.

As an aside, we had planned on celebrating Mass as St. Joseph the Worker parish in Weirton, WV – the town where the conference was actually held – but in mid-August, the Diocese of Wheeling-Charleston informed the organizers of the event that we were not allowed to use any of the churches in the diocese.

When pressed for an explanation, the Vicar General said that it had nothing to do with our plans to celebrate the Traditional Latin Mass, but rather with the fact that the speakers at the conference are “too extreme.”

Specifically, he cited the following as supporting evidence:

Of course he wouldn’t, he wants them to follow Jesus Christ; not that figment of Jorge’s imagination known as the “God of Surprises.”

– Michael Matt referred to the upcoming synod as the Synod of Doom.

Even now, before the dust has settled in Rome, does anyone doubt that he was entirely correct?

This is actually borderline hilarious when you consider that this is coming from a guy who probably calls John Paul II a “saint.”

In any case, take a good look at the photo of St. Peter’s above and tell me what you find most horrifying?

Many, I suspect, and for good reason, will point to that abominable painting depicting Jesus, John Paul the Great Ecumenist, and St. Peter floating on cotton balls.

It really is disturbing on a number of levels. For one, and this is especially noticeable (and aesthetically off-putting) when one is actually there to view it in person, each of the figures (Jesus and Peter in particular) has a disproportionately large head. Maybe the artist felt the need to compensate for the height of the apse. Who knows?

Secondly, is the mural’s lack of symmetry as St. Peter is shown holding the “Keys to the Kingdom,” but poor John Paul II is depicted empty-handed. I mean, would it kill the artist to circle back to give him a Qur’an, a menorah, or a Mason’s compass for crying out loud?

Most irritating of all, of course, is the fact that the Polish pope is even there, and get this, while I had trouble obtaining the exact date when the mural was installed, to my surprise, I was just informed by someone in the parish office that it dates back to the early days of his pontificate!

All of this having been said, the thing that I find most horrifying about St. Peter’s Steubenville as shown in the photo above (which, aforementioned blemish notwithstanding, is a very beautiful church overall), is without a doubt the Novus Ordo dinner table sitting smack dab in the middle of the sanctuary (where it remained as the Traditional Mass was celebrated on the High Altar).

By the way, don’t let the so-called “Benedictine arrangement” (an act of either cowardice, or lunacy, or both on the part of the Abdicator, if ever there was one) fool you into thinking that it’s sacred and belongs anywhere near there.

Thankfully, the Novus Ordo table at St. Alphonsus in Baltimore where I typically assist at Holy Mass is on wheels and can easily be rolled away (but unfortunately can also be rolled back in).

This brings me to the meat of this post; the theology of the altar, something about which I must admit I know far too little. 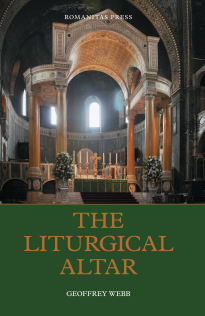 That, however, is going to change as soon as I have a chance to dig into a book entitled, The Liturgical Altar (Geoffrey Webb, Romanitas Press).

I learned about this book from the publisher and founder of Romanitas Press, Louis Tofari, an expert on the Traditional Latin Mass that I’ve gotten to know over the past several years.

Mr. Tofari possesses a wealth of knowledge on the Mass. He specializes in forming altar servers and assisting clergy with the ceremonies of the Traditional Roman Rite; including Masters of Ceremonies for Pontifical High Mass. He also does consulting in the area of church architecture; e.g., the proper design of a church, the layout of a sanctuary, the form of the altar, etc.

I suspect that some of you have already read The Liturgical Altar (in which case I’d be thrilled to hear your thoughts on it), but here’s a brief excerpt for those who haven’t had a chance to do so. (You can get a copy by clicking on the image of the book above.)

But in the form and furnishing of the altar the Church’s directions are all-embracing and exact, although the greatest freedom is allowed the designer in purely architectural design and ornament. The reason for these meticulous directions is to be found in the supreme importance which the Church attaches to the altar in her liturgy. Not only does she consider it the central focus of the whole liturgy, the raison de’être of the building in which it stands; not only does she indicate that the church exists for the altar, rather than the altar for the church; not only does she look upon it as the sacrificial stone, upon which Christ, our Priest and Victim, offers Himself daily in His Eucharistic Sacrifice, which is the central act of her liturgy; but she has proclaimed again and again that in her mind the altar represents her Lord Himself. He is Altar, Victim and Priest; and the reverence for the altar, expressed in the restraint and dignity of its design, symbolizes the reverence due to Christ Himself.

Once I’ve finished reading this book, I may post an in-depth review of sorts. In the meantime, I think most readers here will find a visit to the Romanitas Press site worth their while. In addition to books and other materials, it has articles that are a great resource for anyone looking to learn more about the Traditional Latin Mass; something that is, quite literally, a lifelong effort.