Yesterday’s post elicited an enthusiastic response, most especially from supporters of the “dogmatic certainty” argument.

Before I address some of their comments, I want to share with you an amusing anecdote that comes to us courtesy of our beloved friend John Vennari, buon’anima!

In October of 2014, I had the pleasure of speaking at the Fatima Conference held in Deerfield, IL. The first night of the weekend conference began, as usual, with a dinner and an address given by Fr. Nicholas Gruner.

Toward the end of his roughly hour-long talk, Fr. Gruner made mention of the vision attached to the Third Secret of the “bishop dressed in white” of whom Sr. Lucia wrote, “we had the impression that it was the Holy Father.”

Drawing a contrast between this “impression” and the actual pope who, according to the vision, is killed, Fr. Gruner stressed that they are not one and the same person.

The former, he said, is not the Holy Father, he just looks like it.

At this, Fr. Gruner turned his attention to the fact that Benedict, by his own resignation statement, did not resign the munus, or “office” of Peter.

This led Fr. Gruner to suggest that whatever Benedict intended to do, he wasn’t actually resigning the papacy.

Now, bear in mind, this was more than a year-and-a-half before Archbishop Ganswein essentially confirmed as much, saying in in his infamous presentation of May 2016:

“The key word in that [resignation] statement is munus petrinum, translated — as happens most of the time — with “Petrine ministry.” And yet, munus, in Latin, has a multiplicity of meanings: it can mean service, duty, guide or gift, even prodigy. Before and after his resignation, Benedict understood and understands his task as participation in such a “Petrine ministry.” He has left the papal throne and yet, with the step made on February 11, 2013, he has not at all abandoned this ministry.”

It was clear that Fr. Gruner’s comments took many if not all in attendance by surprise; in particular the Fatima Center staff members who were on hand. 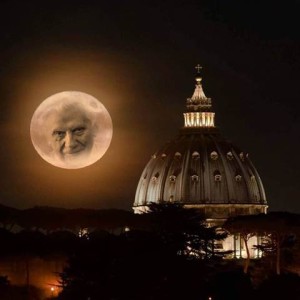 When the presentation concluded just minutes thereafter, with a palpable uneasiness still hanging in the air, John Vennari took to the podium to dismiss the gathering.

With the sharp wit that was ever his hallmark, John broke the tension by quipping in reference to Father’s comments something to the effect:

“I suppose that makes Benedict the man in the munus!”

Needless to say, the room broke out in laughter. The air had been cleared; at least for a time. [Note: As far as I know, Fr. Gruner never distanced himself from his comments.]

Returning now to yesterday’s post, I would offer the following thoughts in response to counterpoints made by certain of my interlocutors.

First, on the matter of those venerable theologians of the past who expounded upon the “dogmatic certainty” that follows the peaceful, universal acceptance (by a moral unanimity) of a new pope:

It is crucial when looking to such writings for support that one first discerns, What question, doubt or concern is being addressed by the author of the text?

In the present case, I have never encountered a citation wherein the specific question that we are moved to ask today (among others) is being addressed. It is essentially this:

If the College of Cardinals is sufficiently deceived into believing that an invalid papal resignation is truly valid (i.e., they are convinced that the See of Peter is vacant when it is not), and they assemble in conclave to elevate a replacement, what is the status of the man they elect?

This question concerns a very unique set of circumstances that merit specific consideration.

It is not enough to cite treatments broadly discussing “canonical irregularities” when those writings give every appearance of having as their starting point the presumption that the Chair of St. Peter was truly vacant when the conclave met.

Now, one may argue that the peaceful, universal acceptance of a new pope serves to validate the invalid resignation of his predecessor, but thus far I’ve not encountered anything convincing to that effect.

If, however, this is true, Canon Law, in order to be consistent should include something along the lines of the following:

A papal resignation not freely made is invalid, as noted, but only until such time as a new conclave elects a replacement that is universally and peacefully accepted as pope.

It is noteworthy that Canon Law foresees the possibility that a papal resignation may be forced and therefore invalid (which has never happened as far as I know), and yet somehow it doesn’t include any such disclaimer; even though a forced resignation by its very nature is a secretive affair.

All of this said, the claim that Francis was peacefully and universally accepted strikes me as dubious in itself.

For one, even before the day the resignation was supposed to take effect, Canon Law professor Fr. Stefano Violi (a man with considerable credentials) and others were questioning its validity.

From my own limited experience alone, to say that a great number of persons both lay and ordained have had misgivings about Francis from the day he was introduced is an understatement, and those reservations only increased in the days and months ahead.

I suspect that most here can say the same.

Among my friends who argue in favor of “dogmatic certainty,” even some of them will plainly admit to as much as well.

Moving on, a comment was offered to the extent that the acceptance of a man as pope by a moral unanimity of the Church has as its cause the dogmatic fact of his election.

In the present case, however, the presumption that the Chair of Peter was empty as the election was held (i.e., the resignation was valid) necessarily comes first and is indispensable in creating the atmosphere of acceptance.

Lastly, our friend and contributor Fr. José Miguel Marqués Campo raised a good question for those on the “dogmatic certainty” side to consider:

What if Benedict comes forward and admits that he was pressured into resigning; i.e., that the act was not freely made as required for validity? What then?

To add to this, I would also ask:

What if Benedict had made this admission one month, three months, or one year into the Bergoglian Occupation? Does time play any factor? If so, how much time?

Some folks are very uncomfortable with the fact that much of this discussion centers on “what if” scenarios.

These, however, are not only fair questions; they are relevant questions based upon the unique circumstances in which we are living.

Dismiss them as sheer nonsense if you wish, but know that in the process you are also dismissing the concerns of men far brighter and holier than most of us combined; Fr. Nicholas Gruner, to name just one.

Gender-bending in Baltimore: A small part of a big plan