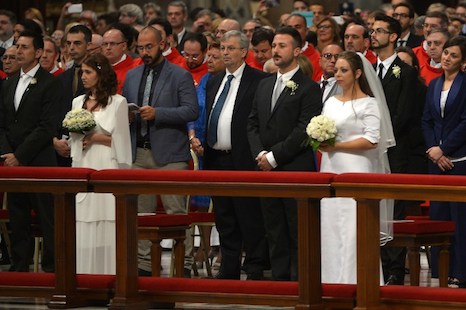 As most readers know by now, Pope Francis witnessed the marriage of some twenty couples in St. Peter’s Basilica on Sunday, September 14th.

As Cardinal Dolan might say, Good for them! Bravo! (No, wait… these were heterosexual couples. Never mind.)

In any case, like so many other things involving His Humbleness, there’s more to the story.

According to a statement issued by the Diocese of Rome in the days leading up to the event, among those getting married that day were couples “who are already cohabitating; who already have children…”

(NOTE: These people didn’t just happen to fall into a bit of good fortune. In fact, they didn’t even apply for the privilege of having the pope witness their marriages; they were handpicked.)

Needless to say, with the air of anticipation surrounding the upcoming Extraordinary Synod of Bishops on Marriage and Family running as high as it is, many in the media and elsewhere are attempting to read the tea leaves to figure out what this might mean:

– Liberals are applauding what they see as an unmistakable sign of big changes to come wherein the Church will take a less “rigid” approach to marriage.

– Traditionalists (aka Catholics) tend to see much the same thing as the liberals, albeit with an appropriate sense of alarm.

– Conservatives, ever the consistent ones, are once again working overtime to make the case that absolutely nothing out of the ordinary is underway whatsoever.

The dirty little secret that few seem to recognize, however, is that all concerned, including the couples, are once again being exploited as useful idiots by the neo-modernists who are currently running the show in Rome.

You see, the papal marriage ceremony on Sunday was simply the latest in a series of initiatives that are part of a Pre-Synodal Reconnaissance Mission wherein the Captains of Newchurch, through various means, attempt to assess the collective temperature of the Body of Christ in order to determine just how much more of their humanist virus it can withstand before full scale rejection sets in.

– Phase One involved the worldwide Survey on Marriage and Family.

– Phase Three was Cardinal Kasper’s presentation to the Consistory of Cardinals and the pope’s fawning appraisal of the same.

The Survey gauged the mindset of the people in a rather direct way; the results apparently signaling that the time was opportune to go public with Cardinal Kasper’s rantings, as well as the pope’s subsequent approval of his “profound and serene theology.”

The telephone call and the marriage ceremony were a bit more devious, with the utter silence on the part of the Holy See concerning certain crucial details being a deliberate (and rather transparent) attempt to stoke the worldwide reaction necessary to help the current regime calculate its final strategy for the Synod.

While some are quick to point to what they perceive as Pope Francis’ ineptitude given the degree to which he has allowed confusion to reign in such situations, it would seem to me that they have grossly underestimated the man.

Francis knows what he’s doing. The former Jorge Bergoglio didn’t navigate a decades’ long episcopal career that landed him in the College of Cardinals, and then the Chair of St. Peter, for lack of cunning. (Seriously, does anyone really believe that he got where is today by virtue of his commitment to the Holy Catholic Faith?)

Pope Francis is well aware that the flock is bewildered. I suspect that he sees the perplexity of the faithful as an acceptable (and ultimately temporary) form of collateral damage, for their own good, as he humbly goes about liberating them from the stifling demands of those “self-absorbed Promethean Neo-Pelagians who favor soundness of doctrine and discipline; while remaining intransigently faithful to a particular Catholic style from the past” (cf Evangelii Gaudium – 94)

Look, any Roman Pontiff who is serious about upholding the demands of his exalted office would never allow the faithful to wallow in the kind of uncertainty that permeates the present pontificate. Never. In the present case, we’re not talking about questions that are difficult to answer:

Did the pope really tell that lady in Argentina to take Communion?

Did the cohabitating brides and grooms take the kinds of steps one should expect (a period of separation and continence, Confession) prior to the marriage?

There is but one reason that answers to these simple questions haven’t been forthcoming from Rome; we live under a pontificate that is determined to “make a mess,” and it’s succeeding wildly.

Let’s not be naïve; Pope Francis and the men who elected him have long since had an outcome in mind for the Synod; one that I suspect lies somewhere between the status quo and the Kasperian solution.

(I have already gone on record as predicting that it will involve affording national bishops’ conferences unprecedented autonomy in regulating Holy Communion for the civilly divorced and remarried, among other things, such that they will be free to implement a “discipline” modeled after the schismatic Orthodox approach.)

One might see in all of this the Hegelian Dialectic in action: Kasper has provided the thesis, the outrage that followed serves as the antithesis; now all that remains is for the Synod to deliver the synthesis.

The only lingering question, at least insofar as the masterminds in Rome are concerned, is just how aggressively to pursue their agenda once the Synod finally commences, and all of the handwringing over the events of last Sunday is just what they had hoped we might provide to help them arrive at an answer.