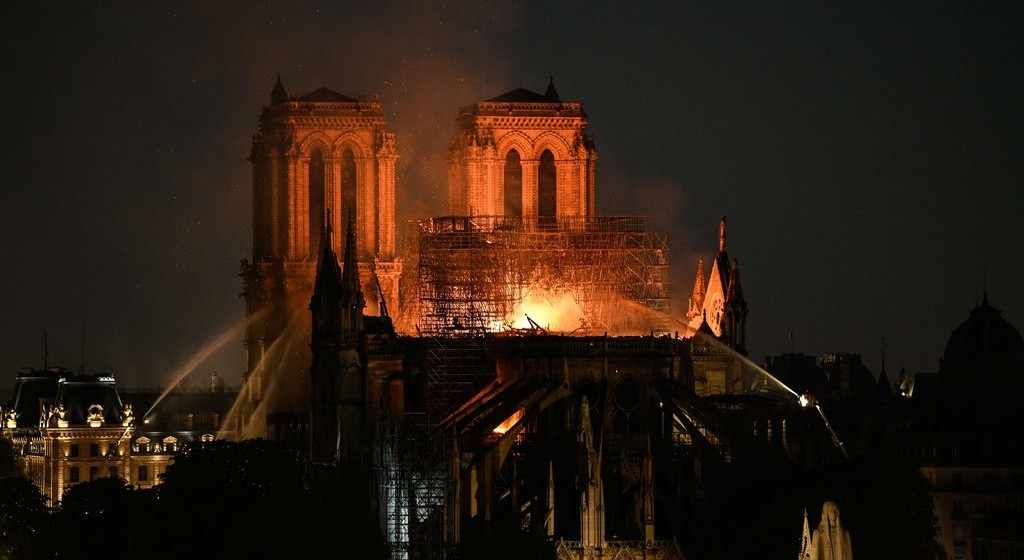 “Notre Dame is our history, our literature, part of our psyche, the place of all our great events, our epidemics, our wars, our liberations, the epicenter of our lives. Notre-Dame is burning, and I know the sadness, and this tremor felt by so many fellow French people. But tonight, I’d like to speak of hope too. Let’s be proud, because we built this cathedral more than 800 years ago, we’ve built it and, throughout the centuries, let it grow and improved it. So, I solemnly say tonight: we will rebuild it together.” – French President Emmanuel Macron

As I write, difficult though it is to imagine, the great Cathedral of Notre Dame de Paris is but a smoldering shell of its former self.

Well before the spire tumbled and the roof collapsed as a result of yesterday’s tragic fire, tradition-minded Catholics worldwide looked on at live images of the ravenous flames and could not help but give voice to the obvious; the destruction of this magnificent structure is a most fitting metaphor for the ecclesial demolition that began on the watch of John XXIII – a conflagration that continues unabated to this very day.

For my part, I’m struck by the statement (above) issued by French President Emmanuel Macron, who, according to his Wikipedia page, was “raised in a non-religious family, [and] was baptized a Roman Catholic at his own request at age 12, although he is agnostic today.”

As for how and why the evidently pious twelve-year-old ultimately turned to agnosticism is anyone’s guess, but the following (also from Wikipedia) seems to provide at least one piece to the puzzle: “Macron was educated mostly at the Jesuit Lycée la Providence in Amiens.”

In any event, as things stand today, Macron is arguably just the right man to spearhead Notre Dame’s rebuilding. How so? Saint Athanasius perhaps said it best at a time when the majority of leaders of both Church and State had succumbed to the Arian heresy:

“They have the buildings, we have the Faith.”

Notre Dame Cathedral was built long ago in honor of her namesake and for the greater glory of God by men who were, quite obviously, aided by His grace in their labors.

Throughout the centuries, the faithful have filled her pews to render honor and glory to Almighty God, and to be nourished in both word and Sacrament. Catholic doctrine was preached from her pulpit. The Holy Sacrifice of the Mass of Ages was celebrated on her Altar; offered in propitiation for the innumerable sins, offenses, and negligences of both the living and the dead, that it may avail for their salvation unto life everlasting.

But then something changed.

Vatican Council II abandoned Christian doctrine; embracing instead falsehoods once clearly condemned; like religious liberty and ecumenism. Paul VI forced a new order of Mass upon God’s people; a bastard rite with no genuine Apostolic roots, but with just enough Catholic trappings to deceive the many. The attention of man was thus turned away from God, away from Heavenly things, and away from the supernatural order.

In the process, Notre Dame came to be like most other post-conciliar buildings – a place where men often assembled with others to gaze almost exclusively upon themselves and on things temporal; to look no further than this world and the natural order.

The following as reported by the World Council of Churches in 2015 illustrates the situation well:

Hundreds of people from many nations and [religious] confessions, among them pastors, priests, laity, nuns, bishops, archbishops and cardinals, joined in a service for God’s Creation at Notre Dame cathedral in Paris during the United Nations climate conference (COP 21) being held in the city.

Readers may also recall, as reported by Reuters in March of 2010, that Cardinal Andre Vingt-Trois had invited Rabbi Rivon Krygier to deliver a lecture from the sanctuary of Notre Dame Cathedral on the merits of an inter-religious dialogue that values “each tradition’s irreplaceable treasure.”

A group of faithful Catholics (members of the SSPX), however, interrupted the event by entering the church and praying the Rosary aloud. The lecture was eventually relocated to a “side room.”

While the terrible fire that decimated the structure of Notre Dame took place just yesterday, its desecration was already a fait accompli as Paris’ great Cathedral had long ago ceased being a sacred place where all honor and glory was rendered exclusively to the one true God; a place where the faithful could assemble confident that they would be nourished in both word and Sacrament without any hint of modernist poison.

“They have the buildings, we have the Faith.”

Today, with Notre Dame Cathedral in ruins, who can be counted on to rebuild her in honor of her namesake? Who can be trusted to guide the effort with a preoccupation on the greater glory of God? If such men were among the leaders of Church and State today, there can be no doubt that Our Lord and Our Lady would lavish upon them a super-abundance of grace to aid them in their labors.

The fact of the matter is, however, no such leaders, with any such preoccupation, exist in our day.

This being so, efforts to reconstruct the desecrated structure that was lost in yesterday’s fire is perhaps best led by a man like Macron; a man who sees the building rather clearly, not for what it was, but for what it had become.

As his statement suggests, Notre Dame de Paris – the structure that was consumed almost entirely by flames on 15 April 2019 – in spite of her glorious beginnings, had become all about us, “our history, our literature, our liberations.”

It was in this context that the French President spoke of “hope;” not the theological virtue that sets our gaze ever upon the saving work of Christ and things eternal, but the earthbound kind that places its trust in man alone. It is a false hope; one that inspired him to go so far as to take credit on behalf of man, apart from God, for having “built this cathedral more than 800 years ago,” only to conclude, “let’s be proud.”

With this in mind, it comes as no surprise that Macron is also reported as having vowed to rebuild Notre Dame “in a way consistent with our modern diverse nation.”

My advice, dear reader: Do not allow yourself to be so moved by emotion as to get behind the reconstruction effort, either financially or otherwise; at least not until such time as the modernists are driven from our midst and the Kingship of Christ is acknowledged and insisted upon by our leaders; especially our churchmen.

For the time being, they can have the buildings; including Notre Dame de Paris. As we await their eviction, may it please God to grant us the grace that we need to always have the one true Faith.

Just days remain to take advantage of our benefactor’s kind offer. Click below to do so.