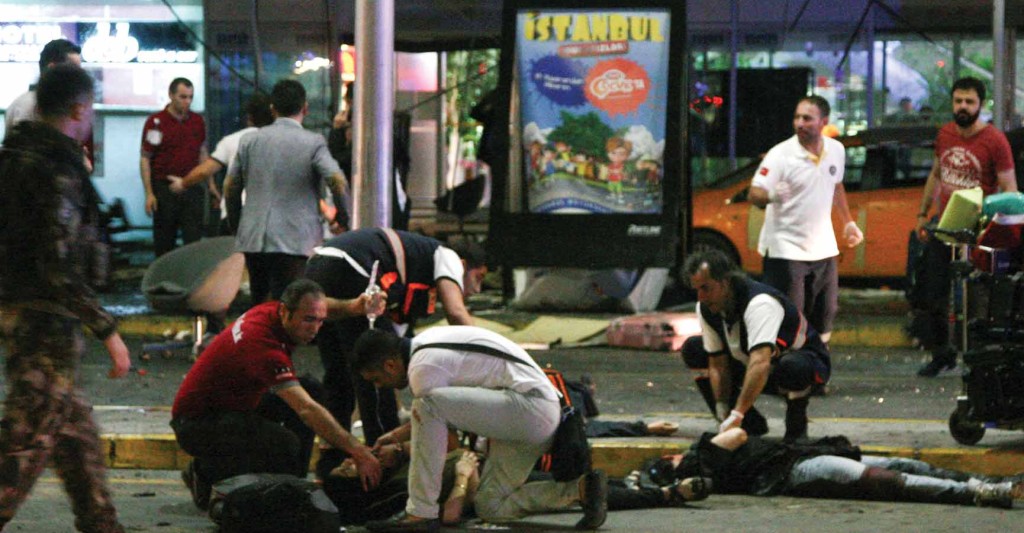 According to a recent news item published by the Associated Press:

“A series of attacks, most linked to the Islamic State group, has killed nearly 350 people in eight countries during the holy month of Ramadan.”

I didn’t think so. The false religion known as Islam has ever been a warmongering ideology that inspires its followers to murder innocent people.

Even so, the apostates in Rome gazed upon the murderous Muslim world and issued, not a call to conversion, but yet another Message for the month of Ramadan; this one entitled, Christians and Muslims: Beneficiaries and Instruments of Divine Mercy.

I didn’t think so. The false shepherds in post-conciliar Rome have long since lost the Catholic faith; failing to call anyone to conversion for lo these past fifty plus years.

Even so, let’s dig a little more deeply into this year’s Ramadan message (the latest of some two dozen such annual debacles) beginning with its title.

How exactly are the benefits of Divine Mercy made available to men?

In the waters of Baptism; the rite by which one enters the Holy Catholic Church, outside of which there is no salvation.

With this in mind, one immediately recognizes that to speak of Muslims as beneficiaries and instruments of Divine Mercy is truly nothing less than a repudiation of the Catholic faith.

From here, the message only got worse, with such gems as the following:

– The month of Ramadan and ‘Id al-Fitr is an important religious event for Muslims around the world, focused on fasting, prayer and good deeds, and is esteemed by Christians, your friends and neighbours.

No authentic Christian esteems Ramadan, the purpose of which, according to the blasphemous book of lies known as the Qur’an, is to “magnify” the false god “Allah.”

– On behalf of the Pontifical Council for Interreligious Dialogue and Christians all over the world, we extend best wishes for a spiritually rewarding fast, supported by good deeds, and for a joyful feast.

The spiritual reward for worshipping false gods is Hell.

– As is our cherished custom, we wish to share with you on this occasion some reflections in the hope of strengthening the spiritual bonds we share.

The conciliar sect thinks of a quarter century old practice as a “cherished custom,” and the Mass of Ages as little more than a “certain fashion” (His Humbleness, Feb. 2014).

Furthermore, there are no “spiritual bonds” between Muslims and Catholics; the former of which have not the Holy Spirit.

– We know that Christianity and Islam both believe in a merciful God, who shows his mercy and compassion towards all his creatures, in particular the human family … God’s mercy is manifested in a particular way, however, through the pardon of our faults; hence he is the one who pardons (al-Ghâfir), but the one who pardons much and always (al-Ghafour).

There is something fitting about a document dispensed from today’s Rome that proposes to profess knowledge of Islam as clearly these men no longer hold the one true Faith.

Seriously, is there any evidence to be found – not just here, but in much of what flows from the Holy See in our day like so much sewage – that the men running the show actually believe that the “particular way” in which “God’s mercy is manifested” is Jesus Christ and the sacraments of the one true Church that He Himself established for our salvation?

– A theme that is close to the hearts of Muslims and Christians alike is mercy.

Once again, there is a truth being revealed in this statement: The apostates in Rome understand mercy as little more than a “theme” for human behavior; one that is made manifest in “good deeds” such as those allegedly practiced during Ramadan – the “holy month” wherein innocent people are routinely killed in the name of Islam.

– To underscore the importance of mercy, His Holiness Pope Francis…

Never mind the cavalier use of the title “Pope,” but Holiness?

It is to laugh! Seriously, folks, in what way is Francis holy?

Over the last three plus years, Francis has done more to inspire sinful behavior than any other person on the planet; not the least by actively encouraging persistence in false religion. And let us not forget that this is the “pope” who recently proclaimed to the world that adultery and fornication are no longer necessarily to be considered mortal sin.

If this is “holiness” in action, let’s just canonize Judas Iscariot and get it over with.

There is much more about which to be appalled in this year’s Ramadan message from Rome, but I will cease torturing you at this.

The reality is, no one in their right mind really cares what “the Vatican” has to say about Ramadan. Certainly, faithful Muslims (meaning, the ones who actually follow its mandates) don’t read these stupid messages, which serve all of two purposes:

One is to give the conciliar idiots who write and dispense this garbage another reason to congratulate themselves for their willingness to dialogue.

Secondly and of far more value, they provide for those who are steeped in denial irrefutable evidence of the extent to which apostasy has overtaken Rome, and thus the dire need to reject the Council’s novelties and return to tradition.