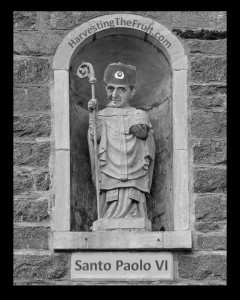 An article on The Catholic Thing blog by Anthony Esolen, Everybody to Pope Paul: Drop Dead, kept popping up on my Facebook feed so I gave it a read.

Well, lo and behold, it’s pretty much what I expected; a plea for sympathy for Pope Paul the Destroyer, the gist of it being a review of that portion of Humanae Vitae wherein the Holy Father made a heartfelt appeal to teachers, spouses, doctors, bishops and others to embrace and disseminate the timeless truths contained therein.

According to Esolen, “They all told him to drop dead … Pope Paul called for their help! He was always, temperamentally, timid and shy.  He the Vicar of Christ needed them, and they instead left him alone in the garden while they played to the crowd. God have mercy upon us. We need it.”

Now, don’t get me wrong, I’ve read some good articles from Anthony Esolen, and I don’t mean to imply that he’s off the mark in this one. Factually speaking, his article is on point; I’m just not particularly moved to tears of compassion for weak, pathetic father figures who need their children’s help in order to carry out the very basics of their sacred obligations.

The Vicar of Christ needed them? Well, I suppose he did, but let’s not loose sight of the reason.

Giovanni Battista Montini was a spineless, hapless, less-than-trustworthy prelate who as a member of the Holy See’s diplomatic corps betrayed the confidence of Pope Pius XII; he was a man whom the conciliar rebels had preordained for the Chair of St. Peter even before the death of John XXIII and a pope whose pontificate was an unmitigated disaster for the Holy Catholic Church and an unprecedented boon for the Evil One.

(NOTE: Those fit for solid food will do well to read Nikita Roncalli, a book by L’Osservatore Romano staffer under several popes, Franco Bellegrande. Linked in its entirety on this site. HT to frequent commenter Catholic-at-Rome.)

I’ve said it before, but please permit me to repeat myself:

Far from being some kind of crowning achievement for Paul VI, Humanae Vitae is really best understood as concrete evidence of the Holy Ghost’s power to protect the doctrine of the Faith from the antics of an incompetent pope.

Up to that point, Paul VI had botched the entire affair by charging a commission with the task of studying the morality of oral contraception, thereby giving fuel to the false impression that a change was forthcoming, as if any real question on the matter actually existed; all of which just set the stage for the mutiny that followed. (In the Holy Father’s defense, he was a bit preoccupied in those years with overseeing the decimation of the sacred liturgy.)

According to Dr. Germaine Grisez, a member of that commission and one of the most accomplished moral theologians of the last century, the Church’s teaching on contraception was an infallible teaching even prior to the formation of the commission.

“I believe and have argued that teaching (in Humanae Vitae) had already been proposed infallibly by the ordinary magisterium,” Grisez said in an interview with Zenit, “that is, by the morally unanimous agreement of the bishops of the whole world in communion with the popes. Together, they had taught for many centuries that using contraceptives always is grave matter.”

(NOTE: The aforementioned Zenit interview is a worthy read wherein one will notice that Dr. Grisez is old school in his bend-over-backwards attempt to defend the pope’s actions. Even so, he shares some very damning information; e.g., in spite of the fact that “the majority of the [commission] theologians … had argued that contraception was morally acceptable, and nine of the 16 cardinals and bishops agreed with their position … virtually all the theologians and all but one of the cardinals and bishops also agreed that the pill was not morally different from other contraceptives, which had long been condemned.”

With all of this said, perhaps I (and presumably most readers of this blog) can be forgiven for failing to shed tears for Paul VI.

Hey, might as well get used to it. This is, after all, precisely where we are headed if indeed Our Blessed Lord allows the men who exercise power in His Church to thumb their collective noses at Him once more via the canonizations of Popes John XXIII and John Paul II.

As horrendous an assault against the Faith as this would be, it’s really just the opening act.

Sure, the point is to “canonize” the Council, and doing so is clearly important to Satan and the neo-modernists who serve him, whether knowingly or otherwise. The main event, however, is “canonizing” the Novus Ordo Missae via the canonization of Paul VI; a far more nefarious offensive as nothing strikes at the heart of Christ’s Mystical Body than an attack against the sacred liturgy.

Be watchful and pray.