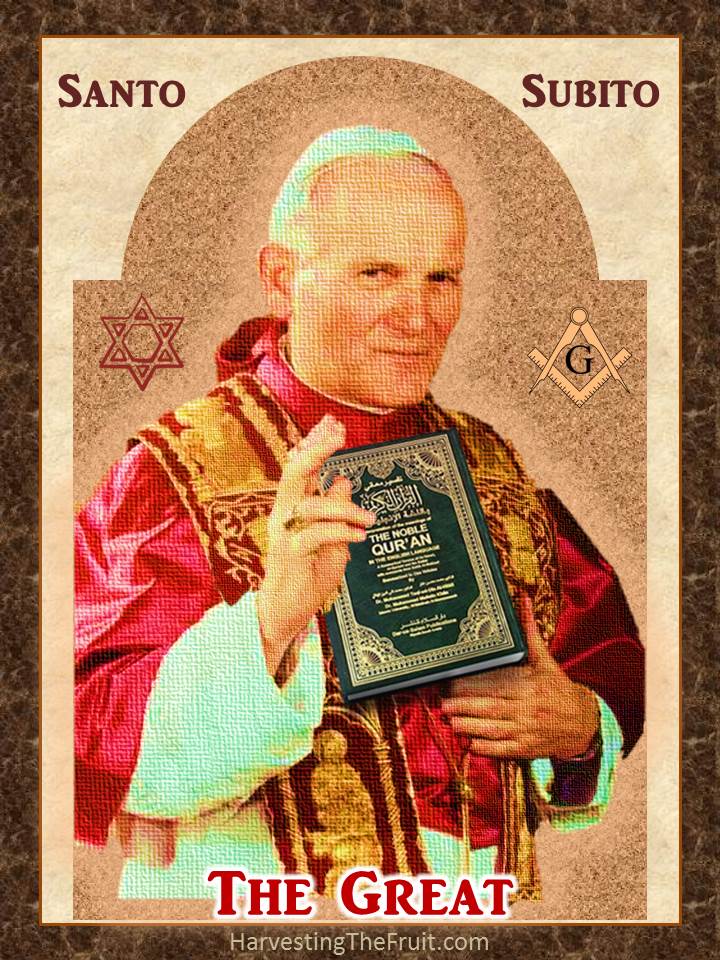 Barring divine intervention, Pope John Paul II will be canonized next month. I will have more to say soon on what this dreadful event may mean for the faithful, if indeed it does take place, but for now I’d simply like to speculate as to what might be the would-be Saint’s most fitting titles and patronages.

From his public veneration of the Qur’an to his nonsensical insistence that Muslims worship the one true God, Pope John Paul II’s love affair with the false religion known as Islam is legendary. If nothing else, just his prayer “May Saint John Baptist protect Islam,” still accessible on the website of the Holy See, is enough to qualify him as:

“I hear around me partisans of novelties who want to demolish the Holy Sanctuary, destroy the universal flame of the Church, reject her adornments, and make her remorseful for her historical past.” So wrote Cardinal Eugenio Pacelli, the future Pope Pius XII in 1933, some fifty-five years before a man rather close to fitting that description would come to occupy the papal throne.

The papal cult-of-personality was singlehandedly invented, inadvertently or otherwise, by the globetrotting John Paul II, setting in motion the phenomenon that currently plaques the Church under the reign of Time Magazine’s Person of the Year.

His warm embrace for heathens, heretics and infidels of various stripes as made manifest at the infamous Kumbaya Convocations known as Assisi I & II have left a scar on the Body of Christ the likes of which she has never experienced. Has any other pope in history done more to promote religious indifferentism than John Paul II? I think not.

So, what do you think might be “the Great one’s” (sorry, Wayne) most fitting titles and patronages?