Home
Blog Post
Pope or Anti-Pope: Does it really matter? 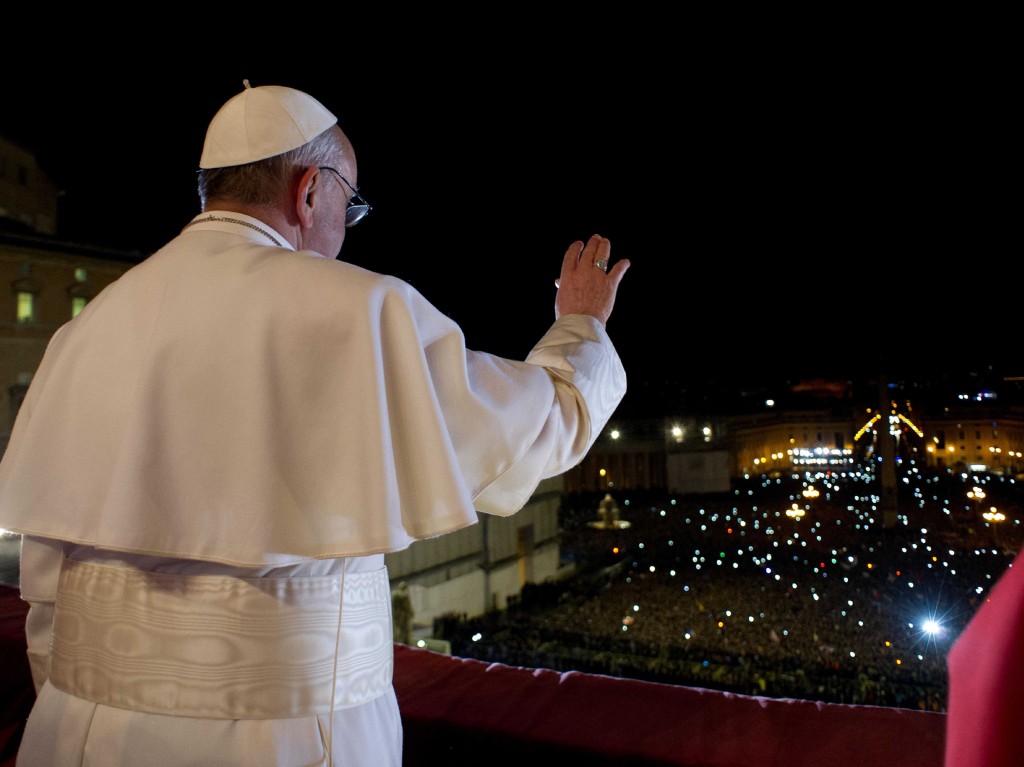 Shortly after Archbishop Gänswein explained the intentions of Benedict XVI with respect to “expanding” the Petrine ministry so as to endow it with a “collegial and synodal dimension,” I expressed my opinion:

Bearing in mind what the Catholic Church has always believed, taught and practiced, I cannot help but conclude that the resignation tendered on 11 February 2013 was invalid.

Defective intentions, however, are not the only reasons one may reasonably question the validity of Benedict’s unprecedented act.

For instance, in September of last year, I provided a detailed overview of the Vatican Bank scandal (worth revisiting, in this writer’s opinion), the timeline of which strongly suggests that among the possible threats leveled against Benedict by the wolves in order to coerce his resignation were financial ones.

Since then, Benedict has raised numerous red flags that further suggest that his hand may well have been forced. He even recently admitted that the reasons he gave for departing office in 2013 simply were not true.

Then there is the role played by the so-called “St. Gallen Mafia” – a group of cardinals that conspired to oppose Benedict XVI in order to press for the advent of a more progressive papacy; one with none other than Jorge Mario Bergoglio at its head.

All of this adds up to ample reason for anyone just this side of ambivalent to ponder, and openly so, whether or not the See of Rome was truly vacant as conclave 2013 met. If it was not, then the “Buona Sera” that was delivered from the loggia of St. Peter’s on 13 March of that year came from the lips of an anti-pope.

While I remain open to being convinced otherwise, my initial thoughts on the matter haven’t changed; on the contrary, in fact.

What you make of this mess is entirely up to you. I certainly don’t expect everyone to draw the same conclusions that I have drawn. Nor do I expect others in Catholic media to likewise dissect emerging details in an effort to discern the truth; much less do I imagine that all are even capable of doing so.

I do, however, expect everyone worthy of the name Catholic to recognize, and to treat, this situation as a matter of the utmost import and urgency.

When the Gänswein story broke back in May, I wrote:

Francis is, as we have known for some time now, a blasphemous heretic that we must not allow to draw us, or anyone else if we can help it, into error and death. On this note, even though Archbishop Gänswein’s conference is a “game changer” indeed, nothing has changed. Keep this in mind as you go about deciding for yourself what to make of this unprecedented mess.

We cannot allow Francis to mislead us or the people we love, obviously, but we cannot stop there; rather, we must also make it our business to discern, as best we are able, exactly how our Holy Mother is being attacked.

Working out one’s salvation necessarily includes an animating concern for the condition of the Church Militant of which we are members. The two simply go together.

Apparently, not all Catholic commentators agree.

With this in mind, any number of readers have asked me to comment on a contrary approach that is born of a false dichotomy; one that alleviates all concerned of any responsibility to inquire further into the matter of Benedict’s resignation, the conclave that followed, and the actual status of the madman that most of the world considers pope.

Specifically, there are those who would have you believe that one must choose between either laboring for one’s salvation or concerning oneself with whether or not the purveyor of error and death known as Francis is truly the Roman Pontiff – as if the validity of his alleged pontificate doesn’t really matter to those of us presently living under this scourge.

This is rather like telling someone to focus on being a good son or daughter while paying no mind to whether or not the man sleeping with Mom is truly Dad or just a convincing imposter, who, by the way, also happens to be publicly humiliating her on a near daily basis and abusing her in various other ways far too numerous to number.

After all, you’re just the child. Mom will figure things out eventually!

The idea is absurd. Even so, let’s consider some of the arguments being floated to this end:

– A future pope will have to sort this mess out for us; we are unable.

The Church is mired in an unprecedented crisis that has been festering for more than five decades now.

In such an environment as this, it is entirely unreasonable – irresponsible even – to simply sit back and wait for a new conclave to elect an intrepid defender of the Faith who will right the ship and set the record straight. I mean, let’s face it, folks – the papabile talent pool is no more than ankle deep at this point.

Rest assured, Our Lord is not asking us to set aside our intelligence and ability to reason in this matter; on the contrary, we need to make use of these God-given gifts all the more in the absence of true shepherds.

Remember what we are talking about here:

The Petrine Office was instituted by Our Blessed Lord as the “permanent principle” and “visible foundation” by which “the whole multitude of believers should be held together in the unity of faith and communion.” (see Vatican Council I, First Dogmatic Constitution on the Church of Christ, Session V, Article 4)

The stakes could hardly be any higher!

As such, no true soldier for Christ can be content to hold his peace when there is reasonable cause to suspect that a usurper may have ascended to the Chair of St. Peter; much less can he behave as if the quest for sanctity somehow requires as much. At best, this would be an exercise in faux docility; or worse, a dereliction of Christian duty.

– Even if it is possible to reasonably conclude that Francis is most likely an anti-pope, having done so won’t serve as any real remedy to the crisis, nor will it provide any meaningful degree of peace.

Not long ago, a well-known “conservative” Catholic apologist who is presently doddering about in retirement accused me of being motivated in this matter simply because I find Francis so deplorable.

Francis is deplorable, alright, but even if he bore more resemblance to Pope St. Pius X than he does to Martin Luther (difficult to imagine, I know, but humor me here), the gravity of the situation wouldn’t be diminished one iota.

In other words, whether Francis is a blazing heretic or a future saint is entirely irrelevant to the specific matter of Benedict’s resignation and the validity of conclave 2013.

Furthermore, God knows that Benedict himself is a modernist wolf. Given that he wears sheep’s clothing more convincingly than Bergoglio arguably makes him more dangerous still.

As such, there is no “rally ‘round the old guy” movement taking place on these pages, I can assure you; it’s simply a matter of facing a dreadful reality head-on.

No one in their right mind imagines that evidence of a Bergoglian anti-papacy will provide relief from the bitter reality of modern day Catholic life. The mystery surrounding Benedict’s so-called resignation is just one more component of a much deeper crisis; albeit an entirely unique one of incalculable gravity.

With all of that having been said, we must acknowledge that a certain amount of peace does in fact come from knowing the truth, which, after all, is not just a collection of facts, but rather the Person of Christ who said, “The truth will set you free.”

– Until we are informed by someone in authority, we can’t really know with certainty one way or the other whether or not the resignation was valid, or if Francis is an anti-pope, and so on. So, why even bother to inquire into the matter?

Do you really want to confine your inquiry into only those matters about which absolute certainty is attainable?

Before you answer, consider the Third Secret of Fatima, you know… the part that is still hidden; the part that those in authority have been lying about with impunity for many years; the part you likely will never see with your own eyes; i.e., the part about which you will likely never attain infallible certainty.

Now you can answer.

– So what if we can reasonably conclude that Francis is an anti-pope? We can’t do anything about it.

And yet no dependable Catholic commentator would ever suggest that openly and publicly pondering such atrocities is a waste of time and energy; much less a distraction from the call to sanctity.

The pursuit of truth doesn’t always lead to resolution, but it’s never a pointless endeavor.

– Francis hasn’t attempted to use the Petrine Office to define doctrine and to bind us to error, so it matters not in the short term if his papacy is valid.

OK, so what exactly has he done?

He has only managed to set forth blasphemy and heresy in what appears to be an authentic papal instrument; thus ensuring the universal practice of blatant Eucharistic sacrilege while undermining the Lord’s very own words concerning the indissolubility of marriage – and all of this under the guise of papal approval.

One may have also noticed that His Humbleness has issued no less than sixteen documents motu proprio – more than Benedict XVI did over a period of nearly eight years; among them, directives altering the annulment process as well as the process for removing bishops from office.

He has also leveraged the power of the Petrine Office to decimate a flourishing religious order, the Franciscan Friars of the Immaculate, and this for the high crime of exhibiting “Lefebvrist tendencies” (otherwise known as Catholic tendencies).

He has likewise given the appearance of papal approval for oral contraception and condom use in the face of a bogus medical scare likely created by population control advocates.

He even lent the prestige of the papacy to a United Nations Sustainable Development program that calls on member states to “ensure universal access to sexual and reproductive health.”

And somehow it matters not in the short run whether they come from the Vicar of Christ or just some costumed imposter?

For some, it’s very tempting to act as if this is true, and on a certain level, I get it.

In the face of this unprecedented attack on the Petrine ministry, the “visible foundation” of the Church, some Catholic commentators will flee, and it must be said that flight has its rewards. Others will dig in and fight, which is always carried out at a cost.

I choose the latter.