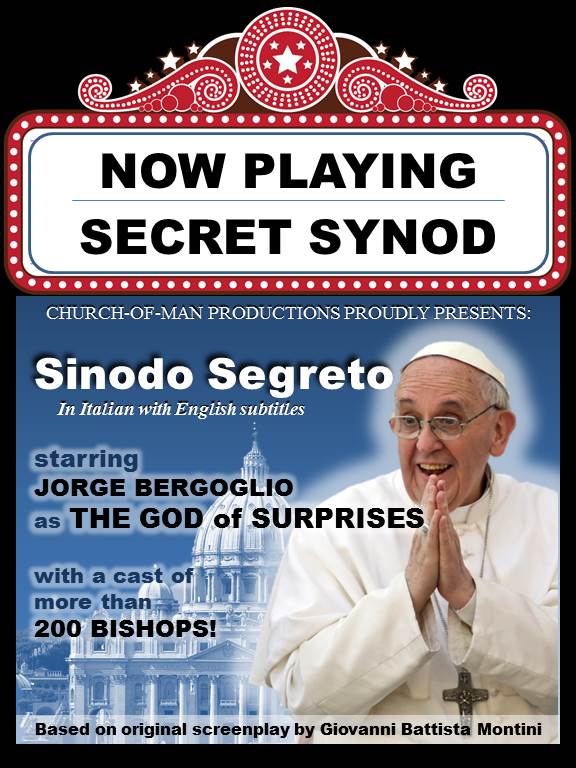 At the close of the Extraordinary Synod, Pope Francis delivered a closing address that deserves some close attention. Speaking before the august assembly, he said:

I can happily say that – with a spirit of collegiality and of synodality – we have truly lived the experience of “Synod,” a path of solidarity, a “journey together.”

We must give the Holy Father credit when credit is due, and His Holiness spoke very well when he suggested that we have just experienced (nay, endured) synodality at its finest.

At this, it is helpful to consider the purpose for which the “Synod of Bishops” was created.

Pope Paul VI, less than a year after placing an “explanatory note” in Lumen Gentium that was ostensibly ordered toward toning down the constitution’s inflated treatment of the college of bishops’ resident powers, threw what might be considered a bone to the “collegiality lobby” by issuing the Apostolic Letter, Apostolica Sollicitudo.

According to this Letter, which established the Synod of Bishops:

The Synod of Bishops has, of its very nature, the function of providing information and offering advice. It can also enjoy the power of making decisions when such power is conferred upon it by the Roman Pontiff; in this case, it belongs to him to ratify the decisions of the Synod.

1. The general purpose of the Synod are:

a) to promote a closer union and greater cooperation between the Supreme Pontiff and the bishops of the whole world;

b) to see to it that accurate and direct information is supplied on matters and situations that bear upon the internal life of the Church and upon the kind of action that should be carrying on in today’s world;

c) to facilitate agreement, at least on essential matters of doctrine and on the course of action to be taken in the life of the Church.

A sober reading of the synod’s job description reveals that it has ever been a ticking time bomb, but perhaps not so much in the way that most tradition-minded Catholics might immediately recognize; namely, as an instrument by which the bishops might one day exercise a decision making power that threatens to undermine the Church’s monarchical structure as instituted by Christ.

In fact, it really does the opposite.

As I read it, Apostolica Sollicitudo quietly, and with a subtlety worthy of the Master Deceiver himself, set the stage where upon the “God of surprises” would one day make an appearance in a production called “the Synod.” The actual play, however, wouldn’t be ready to open in earnest until such time as the intended audience, the faithful, were sufficiently stripped of their sensus Catholicus; a process presently completed in large measure thanks to the Mass of Paul VI.

Even then the spectacle would require the services of a very special Bishop of Rome; one “humble” enough to take on the role of the Almighty.

Pay close attention to the operative part of Apostolica Sollicitudo which states, “…to facilitate agreement, at least on essential matters of doctrine and on the course of action to be taken in the life of the Church.”

Really? Can someone, anyone, please tell me exactly which “essential matters of doctrine” are as yet so incompletely defined as to constitute a legitimate source of disagreement among authentic Catholics?

Clearly, folks, there aren’t any.

Even Pope John XXIII, in his opening address to the Second Vatican Council, made it clear that “the fundamental doctrine of the Church, which has repeatedly been taught by the Fathers and by ancient and modern theologians … is presumed to be well known and familiar to all.”

As such, according to John XXIII, no need existed for the Council Fathers to engage in “a discussion of one article or another of the fundamental doctrine of the Church.”

And yet, if one reads Apostolica Sollicitudo carefully, one sees that in establishing the Synod, Paul VI created what has always had the potential of being nothing less than Vatican II on steroids.

One must also take notice that in spite of the Synod being held up as a hub of collegiality, its “power of making decisions” only exists “when such power is conferred upon it by the Roman Pontiff,” and even then “it belongs to him to ratify the [Synod’s] decisions.”

In other words, the Synod is really nothing more than a pulpit from which the Holy Father is able to pronounce “essential matters of doctrine” as if the “God of surprises” has yet to aid His Church in settling such matters, and all of this under the guise of collegiality.

This dog and pony show is precisely what we witnessed last week as Pope Francis forced the Synod’s stamp upon the abominable Midterm Report of October 13.

Incidentally, those who believe that the final Relatio somehow represents a corrective that has effectively rendered the Midterm Report little more than a bitter memory are sadly mistaken. We’ll review that document later, but for now, let’s continue to focus on the pope’s closing address to the Synod.

While the weak-kneed among us are hailing the closing address as an occasion wherein Pope Francis somehow defended the sacred deposit of Christian doctrine (which, by the way, is his solemn obligation), the truth is he did nothing of the sort.

What the pope really did was equivocate on the matter while pointing a finger of disgust at those who clearly recognize that there are no “essential matters of doctrine” up for questioning (aka Catholics).

One, a temptation to hostile inflexibility, that is, wanting to close oneself within the written word, (the letter) and not allowing oneself to be surprised by God, by the God of surprises, (the spirit); within the law, within the certitude of what we know and not of what we still need to learn and to achieve. From the time of Christ, it is the temptation of the zealous, of the scrupulous, of the solicitous and of the so-called – today – “traditionalists” and also of the intellectuals.

Get that? Those who have “certitude” in the “written word” (read: the “essential matters of doctrine” that have been taught with unfailing consistency throughout the centuries) not only lack “flexibility;” such persons are indeed “hostile!”

Those people have a name, of course, and it is a very dirty one in this pope’s mind, “traditionalist.”

And toward what exactly are those rascally traditionalists (aka Catholics) hostile?

Well, toward “God” himself; the same who has many wonderful surprises to reveal if only we will allow it!

This is what passes for a pope “defending the faith” to some. Amazing. For such individuals the bar hasn’t simply been lowered, it has been buried.

Among other “temptations” listed by Pope Francis, was this gem:

What we have here is a pope publicly denigrating the Martyrs and the great ecumenical councils that respectively died and labored to convey the depositum fidei in “meticulous language;” the only language worthy of being passed down to future generations so that they too may come to know and to love God in truth, ordering their lives well upon His Holy Law.

And this as if beatifying Paul VI wasn’t thumb-in-the-eye of the Communion of Saints enough.

In any case, the pope went about describing a total of five “temptations,” any number of which were communicated in what he must imagine is the clever use of metaphors, but which ultimately end up meaning pretty much whatever the reader wants it to mean (as opposed to that damnable habit of speaking in the “meticulous language” of those whose “yes” means, yes, and whose “no” means, no).

The Bishop of Rome summed up his litany thus:

Dear brothers and sisters, the temptations must not frighten or disconcert us, or even discourage us, because no disciple is greater than his master; so if Jesus Himself was tempted – and even called Beelzebul (cf. Mt 12:24) – His disciples should not expect better treatment.

Let’s be clear, Jesus was never tempted from within as are those delinquents with crosier and mitre who speak of the doctrine of the faith as if it were but a lump of clay that is constantly shaped by the “God of surprises,” when in truth they seek only to mold the Church in their own image and likeness.

Pope Francis cavalierly, if not predictably, went on to credit the chicanery of the Synodal proceedings to the neo-modernists’ pet unstoppable force; “the spirits,” a close cousin of the “God of surprises.”

Personally I would be very worried and saddened if it were not for these temptations and these animated discussions; this movement of the spirits, as St Ignatius called it (Spiritual Exercises, 6), if all were in a state of agreement, or silent in a false and quietist peace.

Indeed, what a terrible tragedy it would be for the bishops to gather with the Successor of Peter as if all were in agreement as to the “essential matters of doctrine,” in which case there would no blessed reason for the Synod to convene in the first place.

I could continue pointing to the arsenic laced throughout the Holy Father’s address but will spare both myself and you, dear reader, the agony.

Let it suffice to say that Pope Francis ended the Synod, not by doing that which the Vicar of Christ is solemnly obligated to do, defend the Holy Catholic Faith and her children; rather, he simply made it rather clear (for those with ears to hear, anyway) that he has no intention whatsoever of doing so at any point in the foreseeable future (divine intervention notwithstanding).

In some large measure, we can thank Paul VI for this mess, and therefore can only marvel at both the fittingness, and the sheer arrogance, of the decision to beatify this destroyer of the Church of dreadful memory at the Synod’s conclusion.