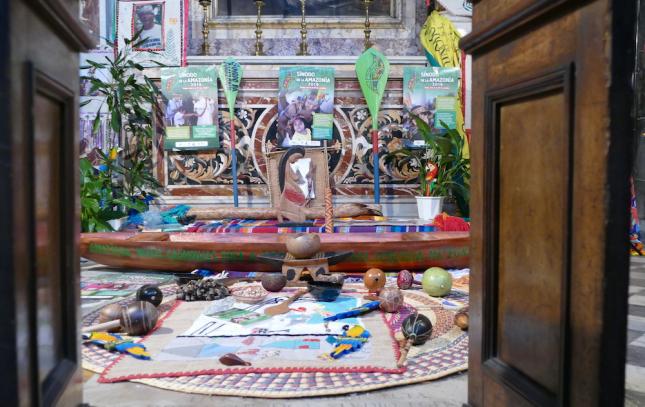 As most readers are likely already aware, a video has been blazing a trail through social media today showing a man removing the infamous Pachamama statues from the Church of Santa Maria della Traspontina and throwing them into the Tiber River.

Reaction has been as one might expect, with those in conservative and traditional circles applauding the gesture an act of heroism, while those to the left decried it as childish, unhelpful and sinful.

The incident was addressed at today’s Vatican press briefing by Prefect of the Vatican Dicastery for Communications, Dr. Paolo Ruffini, who weighed-in saying:

Stealing something from a church and throwing it into the river is not a gesture of bravado. We have said that the statues represented life, fertility and Mother Earth and such an act goes against the spirit of dialogue which should animate everybody.

With every passing day it becomes clearer that the institution presently operating out of Rome under the name “Catholic” is anything but; rather, it is an imposter that is merely mimicking the Church of Christ.

You see, Ruffini spoke very well in denouncing those who would grieve the spirit of dialogue as this is the animating principle of the conciliar church for which he speaks; the same spirit that he insists, “should animate everybody.”

The Roman Catholic Church, by contrast, is concerned with her animating principle and so, like St. Paul, exhorts her members not to “grieve not the Holy Spirit of God” (Eph 4:30).

Ruffini’s comments also serve to confirm that the statuettes are not what the defenders of all things Bergoglian still insist that they are, Marian. They are representations of Mother Earth, otherwise known in certain indigenous Amazonian cultures as Pachamama.

Yes, but were they idols?

In short, Hell yes! They were not placed in a museum, but rather before the altar in a church prominently placed near the entrance to St. Peter’s Square.

We’ve considered what the PR staff at Conciliar Church Headquarters had to say about the idols that were flung into the Tiber River this morning. Now, let’s consider what Almighty God had to say about how such things should be treated.

Their graven things thou shalt burn with fire … Destroy all the places in which the nations, that you shall possess, worshipped their gods upon high mountains, and hills, and under every shady tree: Overthrow their altars, and break down their statues, burn their groves with fire, and break their idols in pieces: destroy their names out of those places. (Deuteronomy 7:25, 12:2-3)

Ruffini concluded his remarks on the incident this morning saying, “I don’t know what else to say. It was a theft.”

If this be so, then we would have to believe that God violated the Seventh Commandment when He ordered the people Israel to overthrow altars, break down statues, break idols...

This, however, is no problem for the Captains of Newchurch in Modernist Rome!

One will recall that the Heretic-in-Chief, Jorge Bergoglio (aka the God of Surprises) has already gone on record as saying that the Divine Law is unjust (see Amoris Laetitia, no. 301), that Almighty God occasionally asks us to break the Sixth Commandment (see Amoris Laetitia, no. 303), and that He was just plain wrong in commanding capital punishment.

Hey, at least these demonic bastards are consistent.

Bergoglio’s Call to Prayer: Will you participate?

Fatima the Movie: A full review