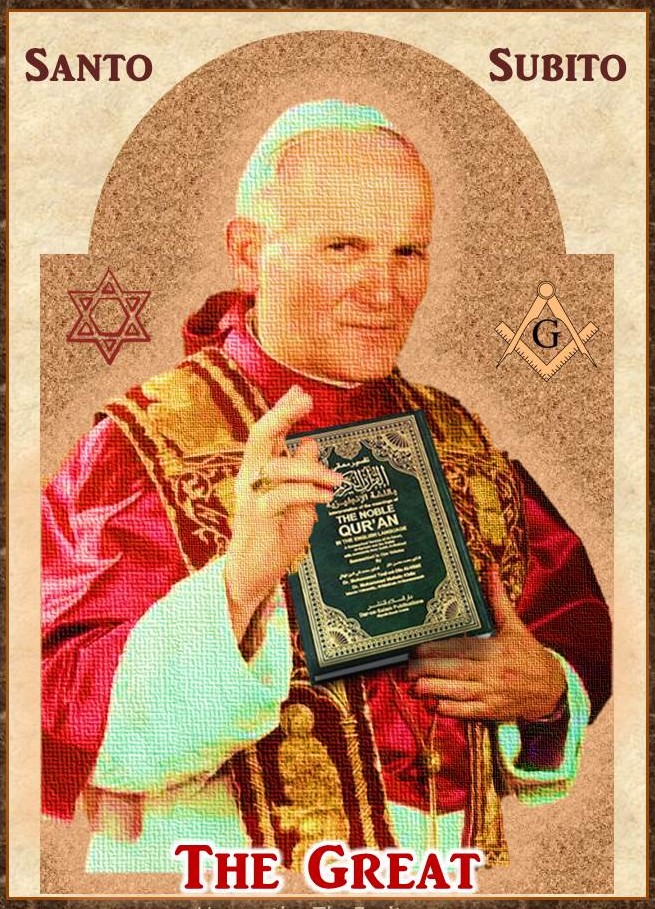 With Cotton Candy Catholics throughout the world gushing sentimental on this the “Feast Day” of John Paul the Great Ecumenist, it occurs to me that a little reminiscence isn’t necessarily a bad thing. So, let’s have at it, shall we…

In his inaugural encyclical, Redemptor Hominis, John Paul II set forth the principles that would guide his long tenure as head of the conciliar church, saying:

Entrusting myself fully to the Spirit of truth, therefore, I am entering into the rich inheritance of the recent pontificates. This inheritance has struck deep roots in the awareness of the Church in an utterly new way, quite unknown previously, thanks to the Second Vatican Council…

These words constitute the foundation upon which, not only his personal reign would be constructed, but also the entire church-of-man in Rome – the same presently leading souls to Hell under the headship of Jorge Mario Bergoglio.

In Redemptor Hominis, the “polish pope” was telling us plainly and without apology that Vatican Council II is precisely what the revolutionaries have always said that it is, a New Pentecost; it is the birth of a new church, one “quite unknown previously.”

As Santo Subito Catholics simultaneously sing the praises of John Paul II and wring their collective hands over PachamamaCon, as if the latter represents a wholesale novelty, they may wish to consider the declaration made by Cardinal Hummes just the other day.

“The Synod,” he said, “is a fruit of the Second Vatican Council.” [See HERE for example]

Let there be no doubt that he is entirely correct. In other words, the Synod on the Amazon has the same “deep roots” as those of John Paul II, both drawing energy not from Christ, but rather from the conciliar church’s new awareness of its raison d’être.

The great divide between the “awareness” of this new church and that of the Catholic Church is obvious to anyone who cares to make note of how the preponderance of modern day (conciliar) churchmen, Bishops of Rome most especially, view their mission.

Though conservatives often lament the near singular focus of “Francis” (as he is known and adored by enemies of Mother Church worldwide) on matters temporal, today would be a good day to remind them that the problem did not begin with Bergoglio.

In a letter to the United Nations in 2003, John Paul II wrote:

The economically poorest countries — facing the constant worry of decreasing levels of food production and availability, and affected by the deterioration of agricultural and forest ecosystems — are often forced to give priority to the intensive cultivation of lands … our attention needs to focus on concrete actions aimed at safeguarding the traditional wisdom of indigenous peoples … because of the failure to safeguard biodiversity or, in certain cases, because of the destruction of forest habitats and the uncontrolled exploitation of fishing resources.

NB: Long before the so-called pontificate of Francis (to quote Fr. Nicholas Gruner) came to focus its “pontifical” energies on such passing things as ecosystems, bio-diversity, forest habitats, fishing resources and the wisdom of indigenous peoples, John Paul II had been there and done that. In fact, he was green way before green was cool.

As for the Argentinian? He’s just following in the Polish guy’s footsteps.

Yes, but while Francis is pleased to be green, John Paul II was Marian blue! In fact, the former even said that Mary was tempted at the Cross to accuse God of being a liar!

Most, it seems, have forgotten that Francis claimed recourse for this blasphemous idea, and not without merit, to the encyclical of John Paul II Redemptoris Mater, which states:

At that moment [the Annunciation] Mary had also heard the words: “He will be great…and the Lord God will give to him the throne of his father David, and he will reign over the house of Jacob forever; and of his kingdom there will be no end” (Lk. 1:32-33). And now, standing at the foot of the Cross, Mary is the witness, humanly speaking, of the complete negation of these words. (RM 18)

As detailed HERE, there was no “complete negation” on the Cross, most especially “humanly speaking” inasmuch as the Kingship of Christ belongs to Him “as man in the strict and proper sense” (cf Quas Primas), something Our Lord would pass through death in order to receive.

So, those looking for someone to blame for the initial suggestion that Our Lady may have understood that God reneged on His promises need look no further than Papa Totus Tuus himself. Also, let us not forget that it was John Paul II who oversaw the alleged release of the Third Secret of Fatima in the year 2000, which even the likes of neo-con hero Cardinal Burke now publicly recognizes as less than complete. So much for Marian blue.

Yes, but Francis treats the Body and Blood of her Son in the Blessed Sacrament as if it is just a piece of bread!

Indeed he does, and guess what: So too does the 1983 Code of Canon Law – the conciliar version promulgated by none other than… you got it, John Paul II.

Canon 844 (c.671 in the Code of Canons of the Eastern Churches) states that a Protestant (e.g., a grape juice drinking / sourdough bread eating Methodist) can receive Holy Communion in the Catholic Church if the diocesan bishop approves, and if he or she “cannot approach a minister of their own community and on their own ask for it.” (ibid.)

Think about what you just read: The Code of Canon Law promulgated by the conciliar “saint” of the day actually equates the snacks that are handed out in the heretical communities (“it”) with the Most Holy Eucharist!

But, Francis encouraged Muslims to cling to their false religion, and even joined that Muslim cleric in declaring that God wills the diversity of religions!

Yes, he did, but nearly two decades before that John Paul II publicly prayed, “May St. John Baptist protect Islam!” Roughly one year prior, he stood in the Vatican before a delegation of Muslims and venerated with a kiss the Islamic blasphemous book of lies known as the Qur’an.

As for religious diversity, Assisi I and II. Need I say more?

But, but, Francis ordered a change to the Catechism so that it now says “the death penalty is inadmissible because it is an attack on the inviolability and dignity of the person.”

Let us not forget that it was John Paul II who once famously told the newly minted Bishop DiNardo in 1988, “Remember, bishop, its all about the human person.”

Seven years later, writing in the encyclical Evangelium Vitae, he would put his money where his mouth is in the matter of capital punishment by eliminating entirely any reference to retributive justice in light of the Divine Law:

Even when such a penalty is seen as a kind of “legitimate defense” on the part of society … modern society in fact has the means of effectively suppressing crime by rendering criminals harmless without definitively denying them the chance to reform.

This language would later be included in a revision of the conciliar Catechism and become part of newchurch’s global crusade against the death penalty in all cases.

But Francis knew all about McCarrick and turned a blind eye!

Yes, and so too did John Paul II.

James Grein, Uncle Ted’s longtime victim, claims that he personally reported the abuse to John Paul II during a private audience and he did nothing about it. “He blessed me. He put his hands on my head. He dismissed me,” Grein recently told reporters.

We could go on with this exercise all day long, but at this the point has presumably been made. So, let’s conclude our remembrance of Karol via Jorge by looking at the beginning of each man’s reign of terror.

Upon being introduced to the world as John Paul II on October 16, 1978, Karol Wojtyla said to the crowd gathered in St. Peter’s Square:

And now the most eminent Cardinals have called a new Bishop of Rome. They have called him from a distant country…

Nearly there-and-a-half decades later, Jorge Bergoglio, upon being introduced to the world as Francis on March 13, 2013, said to the crowd gathered in St. Peter’s Square:

You all know that the duty of the Conclave was to give a bishop to Rome. It seems that my brother Cardinals have come almost to the ends of the Earth to get him, but here we are.

Plagiarize much, Jorge? Evidently, he was keen to signal to the St. Gallen mafia – the group that conspired to put him on that balcony – that he knew his mission well and he was prepared to carry it out; namely, to step over Benedict XVI so as to pick up where Karol left off. Here we are, indeed.