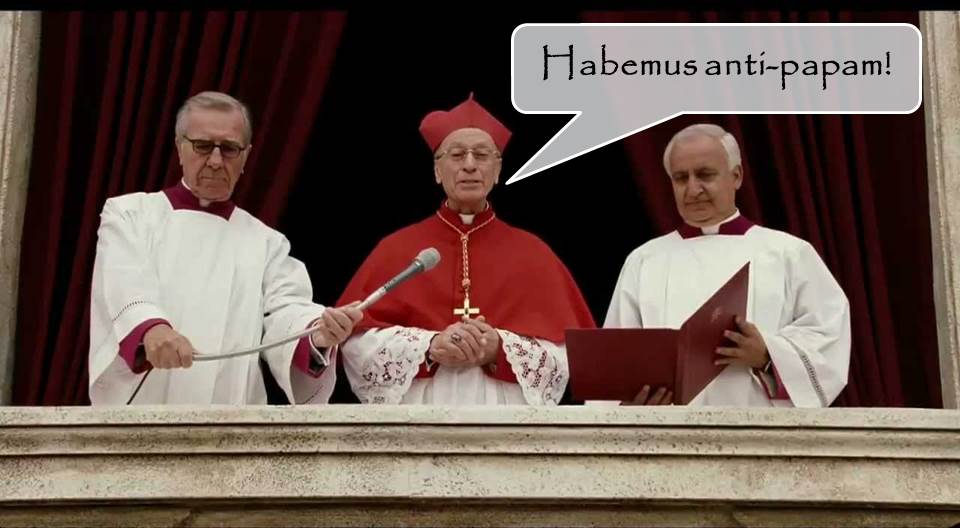 In follow up to yesterday’s post concerning comments, as promised, here I will restate my opinion concerning sedevacantism. Bear in mind that it will be necessary to address this topic in general terms even though individuals who consider themselves sedevacantist may have varying beliefs, as well as ones that go much deeper than I will.

I use the word “restate” here deliberately. Every point that I will raise in this post has been addressed at length in numerous other posts over the past year or more.

First, let me say that as far as individual sedevacantists are concerned (and I have had personal conversations with many), I am rather sympathetic. It seems evident to me that they genuinely love Christ and His Church and are simply doing their level best to make sense of this terrible crisis.

I admire their passion and their willingness to state their case without calculation as to how much popularity (or money) may be gained or lost in the process. On this point, any number of self-identified “traditionalist” apostolates could learn a valuable lesson.

Where the rubber meets the road in this discussion (again, generally speaking) lies in the following question:

Are individual members of the Church competent to recognize when a given claimant to the Chair of St. Peter has fallen into formal heresy and is thus an anti-pope?

The short answer, in my view, is yes.

My disagreement with sedevacantism mainly concerns the notion that this applies to each of the post-conciliar popes, even though one can attribute any number of heresies to them.

Setting aside entirely valid questions (which I’ve addressed many times in this space) about the so-called resignation of Benedict XVI, its validity, and thus the validity of the conclave that followed, Francis is utterly unique with respect to the faithful’s ability to recognize him as a formal, notorious, pertinacious heretic.

There is no question in my mind whatsoever that he is precisely this – a formal, notorious, pertinacious heretic; a man who has severed his relationship with the Mystical Body of Christ – and such a one simply cannot be the head of said Body.

The uniqueness of Francis among the post-conciliar claimants to the papacy lies not so much in the plainness of his heresies and the unprecedented boldness with which he promotes them, but rather in the way in which he has been formally warned, admonished, and corrected.

While the sedevacantist may argue that these verses apply to all of the post-conciliar popes, not one of them in my view was publicly, solemnly and formally warned, admonished and corrected in a manner sufficient to condemn themselves as formal, notorious, pertinacious heretics.

On this note, I find the commentary of the eminent 18th century theologian, Fr. Pietro Ballerini, very useful. The following quote is lengthy, but most worthy of consideration.

Is it not true that, confronted with such a danger to the faith [a Pope teaching heresy], any subject can, by fraternal correction, warn their superior, resist him to his face, refute him and, if necessary, summon him and press him to repent? The Cardinals, who are his counselors, can do this; or the Roman Clergy, or the Roman Synod, if, being met, they judge this opportune. For any person, even a private person, the words of Saint Paul to Titus hold: ‘Avoid the heretic, after a first and second correction, knowing that such a man is perverted and sins, since he is condemned by his own judgment’ (Tit. 3, 10-11).

For the person, who, admonished once or twice, does not repent, but continues pertinacious in an opinion contrary to a manifest or defined dogma – not being able, on account of this public pertinacity to be excused, by any means, of heresy properly so called, which requires pertinacity – this person declares himself openly a heretic. He reveals that by his own will he has turned away from the Catholic Faith and the Church, in such a way that now no declaration or sentence of anyone whatsoever is necessary to cut him from the body of the Church. Therefore the Pontiff who after such a solemn and public warning by the Cardinals, by the Roman Clergy or even by the Synod, would remain himself hardened in heresy and openly turn himself away from the Church, would have to be avoided, according to the precept of Saint Paul.

So that he might not cause damage to the rest, he would have to have his heresy and contumacy publicly proclaimed, so that all might be able to be equally on guard in relation to him. Thus, the sentence which he had pronounced against himself would be made known to all the Church, making clear that by his own will he had turned away and separated himself from the body of the Church, and that in a certain way he had abdicated the Pontificate…

At this, I will invite readers to read (or reread as the case may be) two of my exchanges with Robert Siscoe (HERE and HERE) wherein I make the case that Ballerini’s treatment of Titus 3:10-11 applies directly (and uniquely) to Francis, and furthermore, an individual lay member of the Church has not only the ability to recognize him as a formal heretic, but the duty to say so publicly.

The third paragraph in Fr. Ballerini’s treatment puts my public statements on the matter of Francis as anti-pope in perspective.

As I’ve stated any number of times, my “declaration” on this blog concerning Francis is only my personal, albeit well-informed (if I may say so), opinion. Feel free to take it or leave it, but follow him at your own risk.

It is now up to the so-called “proper authorities” to issue a formal declaration making this “known to all the Church” for precisely the reason given by Fr. Ballerini – “so that he might not cause damage to the rest” – and to go about making arrangements for a conclave to elect a new pope.

Even if the cardinals and bishops (or a portion thereof) never get around to doing their duty, the plain observable fact that Francis has already condemned himself and has separated himself from the Body of the Church remains unchanged, and there is no reason for those with eyes to see to pretend otherwise.

At this, I hope I’ve made it clear where I stand. As I mentioned, there are any number of posts on this blog going into greater detail on each of the points made above. Feel free to comment there (minus the soapbox!) if you wish. Readers will be alerted to recent comments on the sidebar.

NOTE: The combox to this post is closed. I’ve also closed the combox on the “Warning” post as well. You’re all invited to move forward in discussing the topics addressed in the posts that follow.

God willing, we’ll “see” one another there!

The gravity of the canonizations (God forbid!)

The litmus test for “full communion”