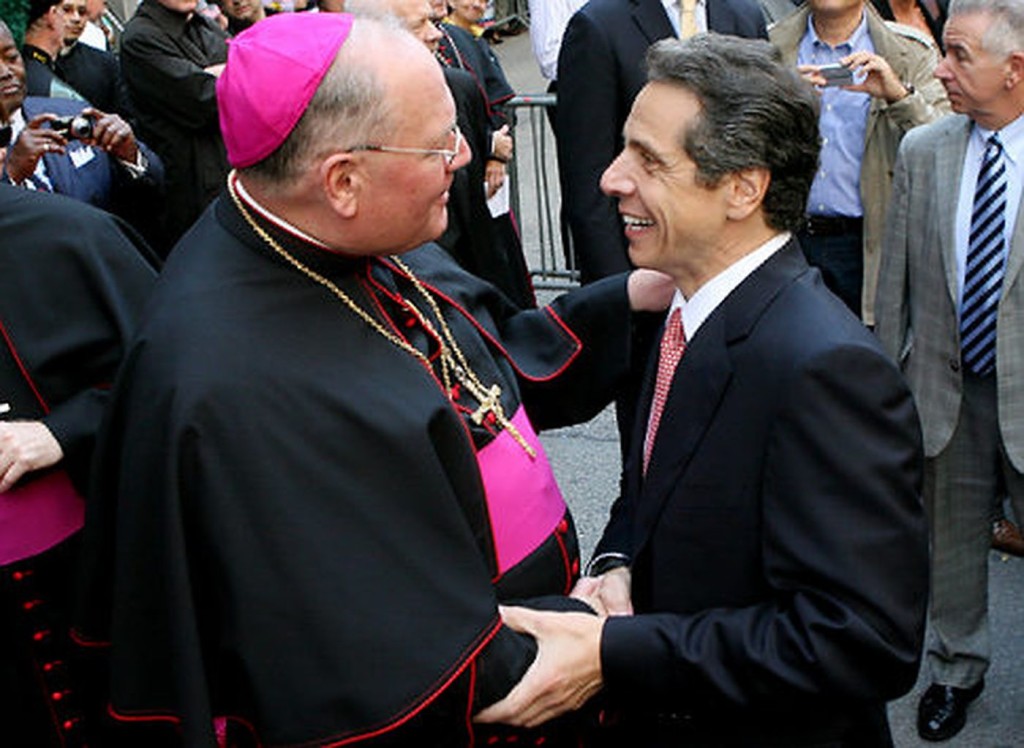 On January 22, the 46th anniversary of Roe V. Wade, the New York State legislature approved the so-called “Reproductive Health Act” (RHA), which effectively legalizes full-term abortions without restriction; up to and including mere moments before birth.

Later that day, self-identified “Catholic” Governor Andrew Cuomo, who is as much a “son of the Church” as Jorge Bergoglio, signed the bill into law to the demonic cheers of godless liberals whose appetite for sex-without-consequences and human genocide is plainly insatiable. Given that the entire “reproductive rights” movement is a diabolical enterprise, it should come as no surprise that its minions are now peddling lies about what the RHA actually allows.

The law does not allow for unrestricted abortion up through the normal term of pregnancy … The Reproductive Health Act changes New York’s law to permit abortions after 24 weeks in case where a woman’s life or health would be threatened by continuing the pregnancy.

Let’s be clear: A woman’s life or health would be threatened = UNRESTRICTED.

Not because I say so, but because the U.S. Supreme Court ruled as much in Doe v. Bolton, a companion case to Roe v. Wade; the ruling being issued the very same day.

In Doe v. Bolton, the Court provided that the legal definition of a threat to a woman’s life or health includes “all factors — physical, emotional, psychological, familial, and the woman’s age — relevant to the wellbeing of the patient.”

By this legal standard – the one presently in force and fully applicable to the RHA – New York State has effectively legalized abortion-on-demand up to the very point of birth for damned near any reason; e.g., I’m emotionally overwhelmed because [fill in the blank].

The RHA and its jubilant supporters are disgusting enough, but more vomit-worthy still, in my opinion, are the responses given by the New York bishops to this abject evil.

A joint statement issued in the name of all of the bishops of New York State (including auxiliary and retired) states:

We mourn the unborn infants who will lose their lives, and the many mothers and fathers who will suffer remorse and heartbreak as a result.

The bishops then pledge to continue fighting the good fight, such as they have, saying:

We renew our pledge to offer the resources and services of our charitable agencies and health services to any woman experiencing an unplanned pregnancy, to support her in bearing her infant, raising her family or placing her child for adoption. There are life-affirming choices available, and we aim to make them more widely known and accessible.

If you’re waiting for me to get to the part where these… ahem… Catholic shepherds mention evil, sin, Jesus Christ, or even “God” in some generic sense, you’re going to be disappointed. The bishops’ answer to this grave offense against all that is holy went no further than doubling down on their social justice political agenda, which is precisely how we got here in the first place.

Dolan, rather than uttering a peep about Andrew Cuomo’s dubious claims to membership in the Mystical Body of Christ, the Holy Catholic Church, blathered on about whether or not he is truly “progressive,” because, well, that’s important.

His Buffoonery, who has been pleased over the years to march side-by-side with Cuomo and a bunch of homos in green in New York’s St. Patrick’s Day Parade, writes:

We New Yorkers pride ourselves on being “progressive” … our current governor has characterized his administration as “progressive,” as was obvious in his recent inaugural address.

Eventually, Dolan gets to the dagger; the big gotcha that surely will cause Cuomo to reflect on his eternal destiny:

Once again, no mention whatsoever of Our Lord or sin or evil; much less a word or two about what makes for “a genuine Catholic.” Dolan did, however, find it expedient to invoke the new god of modernist Rome, the “God of Surprises” – Jorge Bergoglio.

Last week, Bishop Scharfenberger issued an open letter addressed to “Dear Governor Cuomo” in anticipation of the RHA being passed into law.

Readers may recall that Scharfenberger, the “leader” of the Diocese of Albany, made news in August by calling for “an independent commission led by well-respected, faithful lay leaders” in order to clean up the mess created homo-clerical predators and their protectors in the episcopate.

In his open letter to Cuomo, Scharfenberger – just like his brother buffoon in NYC – also mentions neither Our Lord, nor sin, nor evil. He did, however, manage to tiptoe ever so sheepishly in the general vicinity of what it means to be Catholic, writing:

This legislation threatens to rupture the communion between the Catholic faith and those who support the RHA even while professing to follow the Church, something that troubles me greatly as a pastor.

Threatens to rupture communion?  These are not the words of a pastor who is committed to teaching, sanctifying and governing in the name of Christ, but rather do they amount to the pusillanimous prose of a pansy. But it gets worse.

Scharfenberger goes on to cite, “the teaching and intuition of our common faith.”

While one’s first reaction may be to balk at the obvious fact that Cuomo has no legitimate claim to a Catholic faith, Scharfenberger’s statement actually makes perfect sense inasmuch as he too is but a Catholic-in-name-only, albeit with a more convincing costume.

Having neither the guts nor the faith to question, much less refute, Cuomo’s allegiance to Christ and his claims to a Catholic faith, Scharfenberger writes:

It is very difficult to understand how you can align yourself with Pope Francis and so vehemently advocate such profoundly destructive legislation.

So, once again, we see that it is union with Jorge the god of modernist Rome, whose concerns are firmly rooted in all things temporal, that matters most to these men.

Union with Christ? The salvation of souls? Not so much.

Beyond these examples of religious lip service, Scharfenberger ceases all pretense and assumes his truest identity; namely, that of a political hack with a pointy hat and a crozier just like Tim Dolan.

The RHA goes far beyond Roe vs. Wade… does nothing to advance the security and health of women.

If abortion is deemed a fundamental right in New York State, will the State then still be able to issue licenses to pro-life nurses or physicians? Will health facilities which do not provide abortions be certified? Will the law allow that even one dollar be given to maternity services without offering women the “choice” of abortion?

Those who wish to read the entirety of Scharfenberger’s letter HERE will find that 90% of it is pure politics; i.e., it could have easily been read aloud on the floor of the New York Senate by an atheist legislator intent on pandering to his conservative constituency.

Let’s not bequeath to our children a culture of death, but together build a more humane society for the lives of all of our fellow citizens.

Mr. Cuomo, do not build this Death Star.

How clever! Don’t you just love it when a spineless man-of-the-world posing as a Successor to the Apostles reveals himself as a fraud by citing Star Wars instead of Sacred Scripture, and this in the face of pure evil?

Speaking of such things, the conclusion to Dolan’s statement is even more revealing, if you can believe it.

As I’ve written in the past a number of times, for many in the “pro-life” movement, Catholics included, the human embryo has supplanted Christ; becoming the “pearl of great price” for which they are pleased to sell everything.

With this in mind, get a load of the climax to Dolan’s statement on New York’s new abortion-on-demand law and tell me I’m wrong:

Behold the baby in the womb!

A biblical play on words! How very cheeky!

May it please God to give us true shepherds – holy men who are not afraid to stand up to those Hell bent on doing Satan’s bidding; preaching not the gospel of man but rather that of Our Lord Jesus Christ:

Behold the Lamb of God, behold him who taketh away the sin of the world.