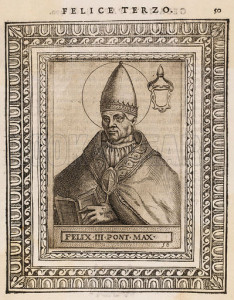 Pope St. Felix III is often quoted as having said:

“Not to oppose error is to approve it; and not to defend truth is to suppress it, and, indeed, to neglect to confound evil men—when we can do it—is no less a sin than to encourage them.”

I would venture to say that these words have been repeated more often over the last two years than the previous five hundred, and for obvious reasons!

In any case, recently I’ve been pondering these words relative to activities in the Archdiocese of Baltimore where I live, while reflecting on the question:

How much gay activism has to take place in the parishes of a given diocese, without any apparent opposition from the local bishop, before it is reasonable to imagine that he approves of it, and perhaps even encourages it?

Some readers may recall that I addressed this issue in a video that I made back in October in response to a truly scandalous event hosted at St. Matthew in Baltimore, one of the areas notoriously “gay friendly” parishes.

Taking place on so-called “National Coming Out Day,” the event was truly nothing more than an officially sanctioned gripe session for those who reject Church teaching on homosexual activity, led by the pastor, Fr. Joseph M 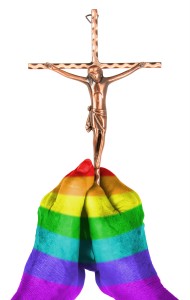 To make matters worse, the official newspaper of the Archdiocese of Baltimore, Catholic Review, covered the event in an article that provided exactly no defense of the Faith whatsoever, and even published a sacrilegious image of the Crucifix (right) to accompany it.

I wrote to Archbishop Lori at the time (as did a number of friends), urging him to issue a strong, equally public, rebuke of this terrible offense against Our Blessed Lord.

Some readers may also recall that I made a follow-up video some weeks later, making note of the Archbishop’s silence; even going so far as to suggest that Archbishop Lori is a friend of the LGBT movement.

This time, a very high ranking official from the Archbishop’s Office responded rather swiftly.

Not by voicing outrage over the misuse of archdiocesan property at the hands of LGBT activists and their sympathizers, but by decrying the content of my video.

(For the present moment, I will keep details of that complaint to myself, but suffice it to say that the person involved lacked the wherewithal to approach me directly.)

Not long thereafter, a very good priest that I respect a great deal spoke with me about the content of that video, and thanks to his wise counsel, I came to the conclusion that while my grievances are entirely legitimate, I had gone beyond the bounds of charity in the conclusions that I had drawn, and so I deleted it.

All of this backstory brings me to the present…

The “Upcoming Events” calendar published on the website of the Archdiocese of Baltimore contains an announcement for the screening of the gay activist documentary, “Anyone and Everyone,” hosted by “the gay and lesbian ministry” of St. Ignatius in Baltimore.

You can read a synopsis of the film on the Archdiocesan website (linked above), but more insight into the nature of this gay propaganda piece can be gleaned from a review that was published in the NY Times back in 2008, the gist of which reads:

Throughout the film … the couples involved allude darkly to other families that have been torn apart by the same pressures … We don’t meet the parents who, rather than rejecting religious beliefs to hold on to a child, have done the opposite.

Instead the film ends up being a sort of pep talk for parents and general plea for gay rights.

Why, one wonders, is a “plea for gay rights” that celebrates “rejecting religious beliefs” being shown in a Catholic parish?

More pressing still, why is this event being promoted by the Archdiocese of Baltimore?

Now, I may not be the most pious parishioner in the pew, but the spiritual guidance recently received is not lost on me…

So, in the spirit of charity, I will simply assume that Archbishop Lori must be unaware of this most recent misuse of a Catholic parish under his authority at the hands of LGBT activists. As such, I have taken it upon myself to make him aware of the matter.

One would hope, and dare I say reasonably expect, that as a result of having made His Excellency aware of this problem, two things will happen very soon:

1) The announcement promoting the screening of “Anyone and Everyone” will be removed from the Archdiocesan website.

2) The event will be cancelled by order of the Archbishop.

I will let you know how he, or a member of his staff, responds.

Until then, I will just continue to ponder the question:

How much gay activism has to take place in the parishes of a given diocese, without any apparent opposition from the local bishop, before it is reasonable to imagine that he approves of it, and perhaps even encourages it?

Is the SSPX preparing for regularization?