Home
Blog Post
Mass “in the name of” the people 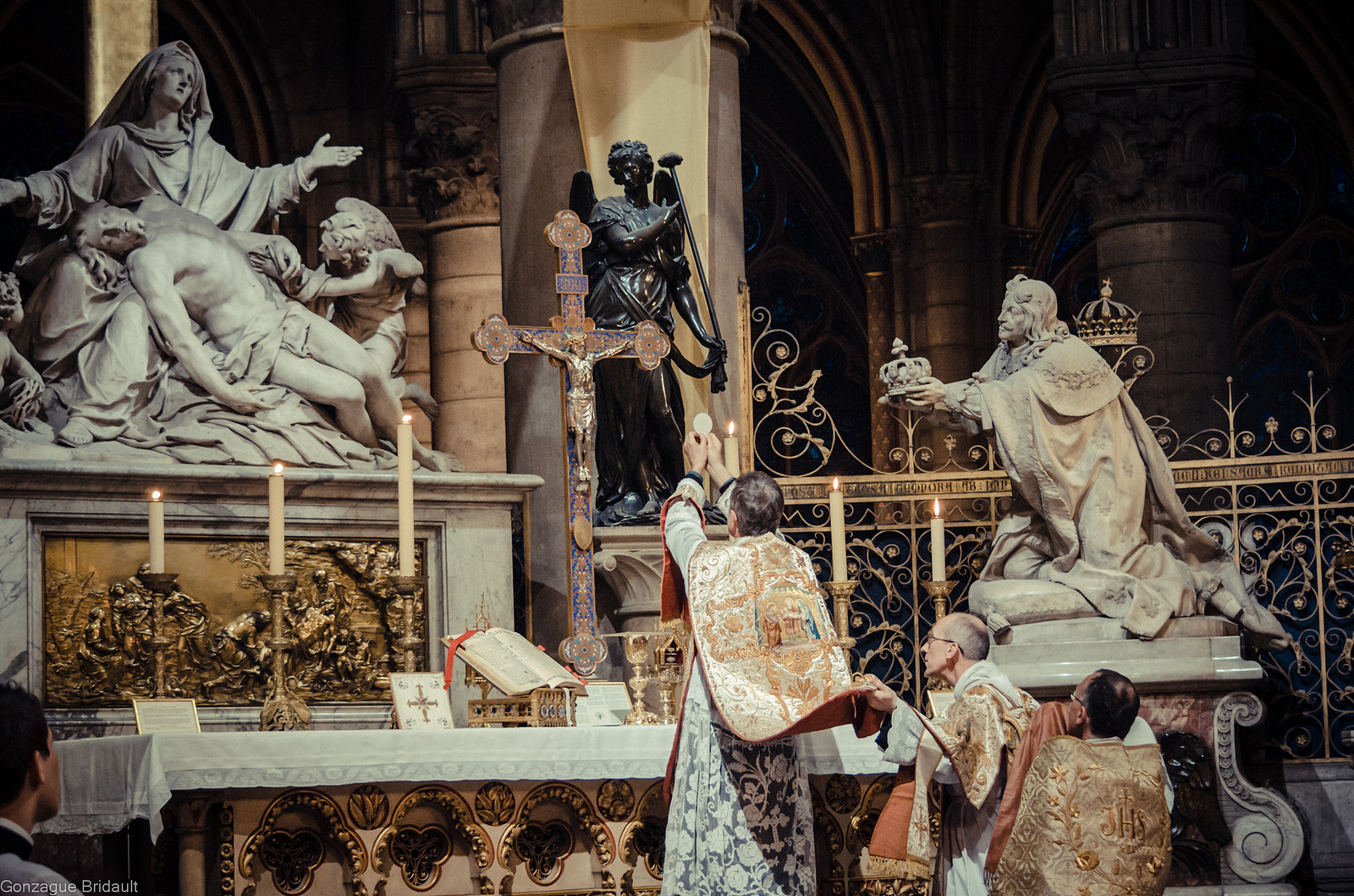 As I wrote yesterday, it is sometimes necessary, especially for those with a public voice in Catholic media, to say “I got it wrong.” With this in mind, I wish to offer a correction to one of the points I raised with respect to the following statement made in the Declaration, which itself is a quote taken from the Credo of the People of God issued by that giant of liturgical orthodoxy Paul VI:

“The Mass, celebrated by the priest representing the person of Christ by virtue of the power received through the Sacrament of Orders and offered by him in the name of Christ and the members of His Mystical Body, is the sacrifice of Calvary rendered sacramentally present on our altars.” (Art. 33)

Concerning this, I noted what appeared to me to be Novus Ordo theology; namely, the suggestion that the Holy Sacrifice of the Mass is offered in the name of the faithful (the “members of His Mystical Body”). By contrast, I noted that the Traditional Latin Mass missal more plainly indicates that the priest offers the Sacrifice on behalf of, or for, the people in the name of, and in the person of, Christ.

In my study this morning, I discovered that Pope Pius XII, in his Encyclical Mediator Dei, employs essentially the same phrase in question.

Before we get to that, however, it is of the utmost importance to note that the Holy Father was deeply concerned that it not be misunderstood. What’s more, he made it plain that apart from detailed explanation, it could lead one to embrace a “dangerous error.”

In this most important subject it is necessary, in order to avoid giving rise to a dangerous error, that we define the exact meaning of the word “offer.” The unbloody immolation at the words of consecration, when Christ is made present upon the altar in the state of a victim, is performed by the priest and by him alone, as the representative of Christ and not as the representative of the faithful. (ibid. no. 92) [Emphasis added]

One can plainly see the danger of invoking the phrase “in the name of” without qualification as we find in the Declaration. In common parlance, when a proxy acts in the name of another, as in the case of an attorney entering a plea, for example, the latter does so as the representative of the former. The Holy Father Pius XII understood this and was at pains to clarify that this is not what takes place at Holy Mass.

It was only after insisting upon this very important caveat that he went on to say:

Now it is clear that the faithful offer the sacrifice by the hands of the priest from the fact that the minister at the altar, in offering a sacrifice in the name of all His members, represents Christ… (Mediator Dei 93)

The Holy Father, Pope Pius XII, further clarified in what sense the Mass is “offered” in the name of the faithful as in the very next sentence he writes:

But the conclusion that the people offer the sacrifice with the priest himself is not based on the fact that, being members of the Church no less than the priest himself, they perform a visible liturgical rite; for this is the privilege only of the minister who has been divinely appointed to this office: rather it is based on the fact that the people unite their hearts in praise, impetration, expiation and thanksgiving with prayers or intention of the priest, even of the High Priest himself, so that in the one and same offering of the victim and according to a visible sacerdotal rite, they may be presented to God the Father. (ibid.) [Emphasis added]

This is what it means to say that Mass is offered in the name of the people; the priest, acting in the person of Christ the High Priest, presents their prayers, their praise, their intentions joined to the Holy Sacrifice, offering these to God the Father on their behalf.

So, long story short, the phrase found in the Declaration is not condemnable as such; the lack of explanation, however, most certainly is.

Perhaps this correction is overkill, but getting it right matters and I hope this clears up any confusion I may have caused.

All of that said, where the Declaration’s treatment of the Mass is most generally dangerous is that it leads one to believe that its exalted description of the rite applies just as much to the Novus Ordo as to the Mass of Ages. Obviously, the vast majority of those who read the Declaration frequent the bastard rite. As readers of this space most certainly know, the Novus Ordo deserves no such praise; in fact, heaping such upon it is tantamount to inviting the innocent to lose their faith – the demonstrable result to which it leads.

UPDATE: I had an interesting exchange on social media last night with a fairly well-known traditional religious brother who publicly expressed his gratitude for the Declaration without any qualification whatsoever. When pressed, he acknowledged that the Declaration’s treatment of the law of Moses could lead one to draw erroneous conclusions; specifically, given the auhtors’ decision to use the word “alone.”

And yet, he stood by his public praise for the Declaration by invoking the same excuse as the SSPX with regard to its now totally discredited evaluation of Amoris Laetitia – namely, he claimed that the authors likely did not intend an erroneous reading, and so they should get the benefit of the doubt!

Having been reminded that their intent has no bearing whatsoever on the objective sense of the text (which he also acknowledged) and therefore the danger it poses, he continued to hold firm in offering his applause.

Evidently, even many so-called traditionalists are so desperate for a “full communion” hero in clerics that they will compromise with error; in spite of the danger to souls that doing so represents. Hopefully other persons with a similar public presence will take a more responsible approach.

NOTE: At present, Catholic Family News has yet to comment on the Declaration. I’m looking forward to their take. Let’s hope they don’t also overlook the poison it contains.