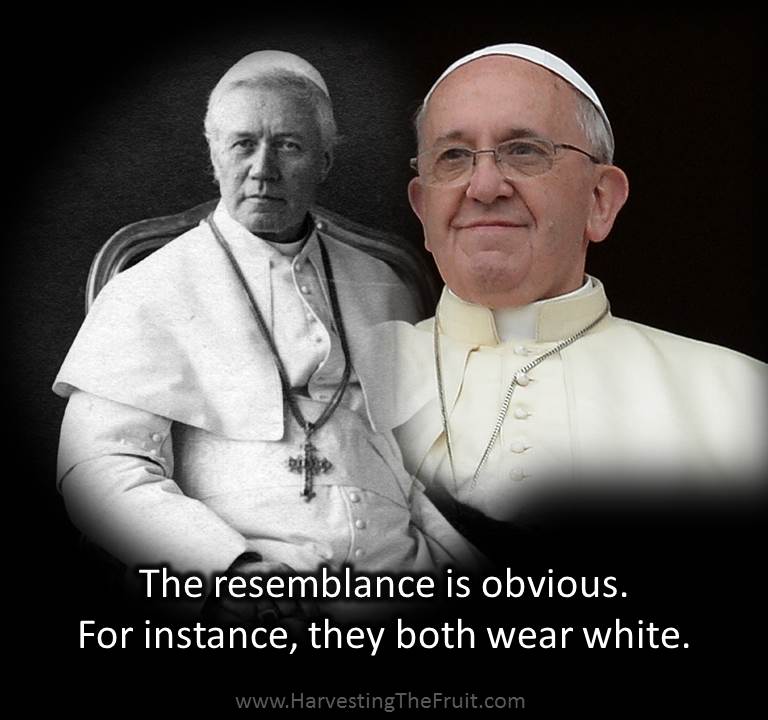 So might I suggest would be a rather fitting motto for today’s ecclesial movers and shakers.

From the sacred liturgy to the goal of ecumenism; to the nature of the Petrine Office and the relationship between the Church and the State, you name it, there’s nothing that the Captains of Newchurch (aka the powers that be in the post-conciliar hierarchy) cannot reconfigure, redefine or otherwise repurpose to suit their anthropocentric aspirations.

As the events of Low Sunday (otherwise known as Divine Mercy Sunday) made perfectly clear, even the designation of “Saint” and the meaning of “heroic virtue” are subject to a makeover.

The legacy of Pope St. Pius X, the last Roman Pontiff to be canonized before it was decided that “all things on earth should be related to man as their center and crown” (Gaudium et Spes – 12).

According to participant Professor Alejandro Mario Dieguez of the Vatican Secret Archive, speaking to VIS, the initiative is an attempt “to recover the historical Pius X and not that of myth, the Pius X of ecclesiastical governance and reform, and not that of popular piety, recomposing the complex and fascinating personality of this pontiff.”

Could these people be more transparent?

Look, it’s no secret that “piety” surrounding the person and papacy of Pope St. Pius X is “popular” almost exclusively among those who haven’t yet drunk the conciliar Koolaid. With this being the case, it seems rather obvious that the aim of this effort to “recompose” the legacy of Pope Pius X is ultimately ordered toward the discrediting of so-called “traditionalists” (aka Catholics).

The last thing the neo-modernists really want is for the faithful to sink their teeth into that which Pope St. Pius X taught so clearly on any number of important topics.

So why call attention to him at all?

Though the occasion of the centenary of his death is being claimed as the impetus, I suspect that something else is afoot, and it’s not all that difficult to figure out.

Pope St. Pius X is, in many ways, the polar opposite of all of his post-conciliar successors, but none more than Pope Francis, the latter citing humility as a reason to forgo the trappings of his exalted office; the former being humble enough to embrace them.

One hundred years following his death, the pontificate of Pius X still offers sustenance for Catholics who are hungering for “doctrinal security,” the same that Pope Francis has seen fit to ridicule.

To top it all off, Pope St. Pius X is the namesake of a Society comprised of bishops, priests, religious and laity who have the audacity to think and feel and worship as Catholics always have done so, at least prior to the opening of the Church’s windows to the world at Vatican II.

As such, the dirty work of discrediting his magisterium, especially those teachings that testify against so many of the enlightened men now running the show in Rome, must be addressed.

By consigning it to what John Courtney Murray called, “an historical problematic;” i.e., by asserting that said teachings are in some sense outdated. “Pius X, we can say, was working in a particular context,” Fr. Ardura said, and he went on to explain:

Now, then, that was crystal clear, was it not?

If you have no blessed idea what Fr. Ardura is talking about, don’t feel bad; neither does he in all likelihood.

For clarity, let us turn to he who was appointed to serve as Pope Francis’ right hand man in the reform of the Roman Curia, Cardinal Óscar Andrés Rodríguez Maradiaga, who said, “The Second Vatican Council was the main event in the Church in the 20th Century. In principle, it meant an end to the hostilities between the Church and modernism.”

With this being the mindset du jour, I suppose it only makes sense that Fr. Ardura would say of Pius X, “His condemnation of modernism obscured the positive parts of his ministry.”

Take that you self-absorbed Promethean neo-pelagian Catholic bats who think that his condemnation of modernism is among the positive parts of his ministry!

So, for what then does Pope St. Pius X deserve credit?

According to Fr. Ardura, “He was more aware than other papal predecessors that the state of the pontificate had to go forward and could not go backward, only forward.”

Yes, which is precisely why Pope Pius X renounced the Triregnum and the sovereignty it symbolized, refrained from condemning heretics in favor of dialogue, and sought to promote a more synodal Church in place of the monarchical model that was given by Christ.

No, wait… that’s the agenda of the neo-modernists!

Pope St. Pius X, truth be told, really was all about going “back,” in a sense, back to Our Lord Jesus Christ. In his first encyclical, E Supremi Apostolatus, the Holy Father could not have been more clear and succinct in explaining his own motto, Instaurare Omnia in Christo:

“We proclaim that We have no other program in the Supreme Pontificate but that of restoring all things in Christ so that Christ may be all in all.”

Even so, Fr. Ardura insists that, “all the activities of Pius X were reformative,” and what’s more, he and Pope Francis are of like mind in believing “that whatever can be reformed, should be.”

This may very well be true as it concerns the view of Pope Francis, but a program of “restoring all things in Christ,” is not the same as “reforming whatever one can,” especially when man (his poverty, his loneliness, his employment status, etc.) is the centerpiece of the effort.

Perhaps this is just a moment of clumsiness on Fr. Ardura’s part, but it has always been, and remains, the case that one must be in a state of grace to receive Holy Communion worthily. Pope Pius X, in other words, didn’t change anything in that regard.

Moving on, Fr. Ardura said, “Also important were his liturgical reforms, including those of sacred music.”

Once again, Fr. Ardura is speaking of “reform” when truly “restoration” is the far more accurate word.

To be exact, Fr. Ardura is referring to the document of Pope Pius X, given moto proprio, wherein the Holy Father saw fit to “raise [his] voice at once in reproof and condemnation of all that is seen to be out of harmony” with the ongoing effort to “restore sacred music to the fullest honor.” (cf Tra le Sollecitudini)

Given that Fr. Ardura and Professor Dieguez are representatives of the Holy See, the majority of Catholics will simply accept their commentary as trustworthy nourishment for mind and soul. Sadly, as readers of this space know all too well, we don’t live in such innocent times.

These men are too clever by half; presuming to deceive the masses, if not themselves, with pseudo-academic pursuits that have little to do with teaching the authentic faith and everything to do with promoting the cult of man.

In the end, however, Our Blessed Lord will show all of us, including them, what it really means to make all things new again.

Amoris Laetitia: A revolution in language

Jorge, did you know?