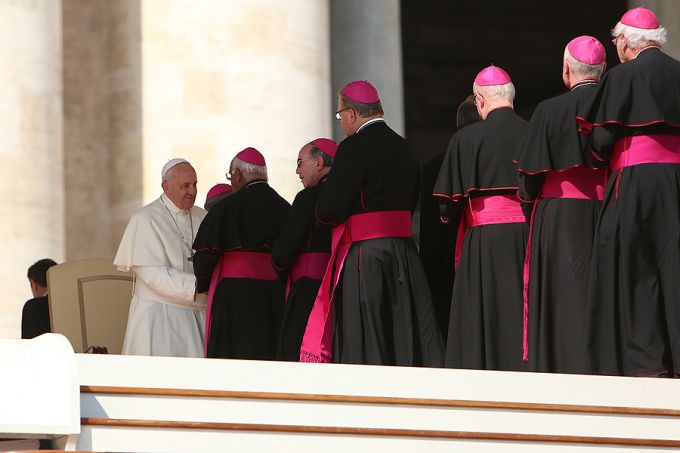 On Wednesday, March 4th, the Pontifical Gregorian University in Rome will open a three-day event, co-sponsored by the Italian Bishop’s Conference, dedicated to examining “Liturgy as a means of evangelization.”

This conference (one that Pope Francis presumably will address, either in person, or via a written statement) may give us more insight into the upcoming Synod of Bishops than one might imagine.

According to Vatican Radio, the conference “takes its inspiration from Pope Francis’ comments on the liturgy in his Apostolic Exhortation, Evangelii Gaudium: ‘Evangelization with joy becomes beauty in the liturgy…The Church evangelizes and is herself evangelized through the beauty of the liturgy, which is both a celebration of the task of evangelization and the source of her renewed self-giving.’” (EG 24)

In addition to proposing the liturgy as a tool for evangelization – a concept pushed forward by the pre-conciliar liturgical movement spearheaded by the ecumenist Dom Lambert Beauduin – Pope Francis had any number of noteworthy things to say about liturgy in Evangelii Gaudium.

Seizing the opportunity to take another verbal whip of cords to “traditionalists” (aka Catholics), the Holy Father said:

In some people we see an ostentatious preoccupation for the liturgy, for doctrine and for the Church’s prestige, but without any concern that the Gospel have a real impact on God’s faithful people and the concrete needs of the present time. (EG 95)

While it may be tempting to dismiss this as just one more among countless other insults hurled in the direction of faithful Catholics by the reigning pope, these words are telling beyond what may be immediately obvious.

First, this statement clearly indicates that Pope Francis holds to the erroneous notion that the sublimity of the ancient rite renders it outdated to the point of practical irrelevance; i.e., he obviously isn’t capable of comprehending how the Mass of Ages, the same that nurtured the Saints in holiness for some 1,500 years, could possibly have “a real impact on God’s faithful people and the concrete needs of the present time.”

Is it any wonder that some people are asking, in all sincerity, if this man is even Catholic?

Perhaps more importantly, one notes that in connecting liturgy, doctrine, and the sacred rite’s impact on the faithful, it is evident that Pope Francis understands well, even if only intuitively, the principle lex orandi statuat legem credendi (the law of prayer establishes the law of belief).

You see, this explains why Pope Francis is so hostile toward the traditional Mass. He knows very well that it serves to inculcate the faithful with a love for the very doctrines that he considers mere obstacles to the so-called “pastoral initiatives” he so clearly favors.

As such, it should come as no surprise that Pope Francis is attempting to leverage the sacred liturgy’s innate formational power to propagate his modernist ideas.

Already, his now well-known hand in approving and publishing the Extraordinary Synod’s midterm relatio provides hard evidence of his desire to make of the liturgy a venue wherein the “God of surprises” (more properly identified as Bergoglio himself) can infect the hearts and minds of the faithful with what amounts to a new faith.

In one sense, the topic being addressed by the upcoming liturgical conference, in and of itself, is nothing new.

The Novus Ordo Missae has ever been the fruit of the Beauduin led liturgical movement wherein the emphasis on catechesis, evangelization, ecumenism, and social action in the liturgy duly overshadows the true nature of Holy Mass; the immolation of the sacred Victim upon the altar in propitiation for our sins.

Even so, the Franciscan revolution stands out among the post-conciliar pontificates as it relates to the boldness with which the liturgical reorientation is being pressed forward. (This is especially so relative to Pope Benedict XVI and his obvious desire to restore the Church’s venerable liturgical traditions; most notably via Summorum Pontificum.)

Pope Francis, for his part, even goes so far as to suggest that the role of preaching in the Mass – something that is optional outside of Holy Days, and never takes place when the faithful are not present – stands on a near equal footing with the Most Holy Eucharist.

We have long since moved beyond that old contraposition between word and sacrament. The preaching of the word, living and effective, prepares for the reception of the sacrament, and in the sacrament that word attains its maximum efficacy. (EG 174)

Before the advent of the current pontificate, a statement such as this would have caused consternation in our so-called “conservative” Catholic friends had it come from a parish priest; today, it’s passed over in silence even though, and because, it comes from the lips of the pope himself! I digress…

The “old contraposition” to which Pope Francis refers concerns the traditional rite which more clearly (and very rightly) distinguishes between the Mass of the Faithful (that portion of the rite, beginning at the Offertory, directly oriented toward the Sacrifice at the altar), and the Mass of the Catechumens that precedes it.

That said, “contraposition” is a poor choice of words as the two parts of the Mass, though most certainly unequal, were never imagined to be “opposed” to one another.

In any event, this undue stress on “preaching of the word” is part and parcel of the “reformers” desire, as reflected in the very opening lines of the Constitution on the Sacred Liturgy of Vatican II, to make the Mass a more comfortable occasion for protestants whose Sunday service boasts of little else.

It is also directly traceable to Presbyterorum Ordinis, the Council’s Decree on the Ministry and Life of Priests, which proposed under the heading “Priests’ Functions”:

Since no one can be saved who does not first believe, priests, as co-workers with their bishops, have the primary duty of proclaiming the Gospel of God to all. (PO 4)

In Catholic thought, by contrast, the primary duty of the priest is to offer the Holy Sacrifice at the altar in atonement for our sins, administering the sacraments, caring for souls, etc.

Even heretic “ministers,” albeit in ways imbued with error, venture to “proclaim the Gospel of God to all” as their “primary duty.”

But then, that’s the point, isn’t it?

Elsewhere in Evangelii Gaudium, Pope Francis further diminished the exalted role of the priest vis-à-vis his duty to preach saying:

The same Spirit who inspired the Gospels and who acts in the Church also inspires the preacher to hear the faith of God’s people and to find the right way to preach at each Eucharist. (EG 139)

One notes here a perverted understanding of the sensus fidei wherein it is imagined that the priest is led by the people; a perversion also evident in the pressure Pope Francis exerted upon the Extraordinary Synod to listen to “the beat of the age.”

This inversion of roles is a very serious matter. Like modern ecumenical efforts wherein no one is called to conversion, it is the fruit of a bankrupt ecclesiology; the same clearly evident in the very text upon which the aforementioned liturgical conference will focus:

Evangelization with joy becomes beauty in the liturgy…The Church evangelizes and is herself evangelized through the beauty of the liturgy, which is both a celebration of the task of evangelization and the source of her renewed self-giving. (EG 24)

Consider, is it proper to imagine that the Church, the Mystical Body of Christ, is herself evangelized in the sacred liturgy?

While we can say that the faithful are nurtured and in some sense formed in the sacred liturgy, the simple answer is no, the Church herself is not evangelized therein.

The word “evangelize” comes from the Latin, evangelizare, meaning “gospel,” a word found most notably in Sacred Scripture (in the Latin Vulgate), relative to the nature and purpose of the Church, as Our Blessed Lord, reading from the prophet Isaiah in the synagogue, proclaimed His mission:

The spirit of the Lord is upon me. Wherefore he hath anointed me to preach the gospel to the poor, he hath sent me to heal the contrite of heart, to preach deliverance to the captives and sight to the blind, to set at liberty them that are bruised, to preach the acceptable year of the Lord and the day of reward. (Luke 4:18-19)

Having been endowed with the fullness of the Spirit, the evangelizing mission described by Our Lord as His own is now proper to the Holy Catholic Church, His Mystical Body and Bride.

As such, it is clear that it is incorrect, and frankly dangerous, to imagine that the Church, the solitary evangelizer established by Christ, is herself evangelized in the liturgy.

In all of this, Pope Francis is at least consistent.

One recalls Cardinal Bergoglio’s intervention at the pre-conclave Congregation of Cardinals wherein he proposed evangelization as that through which “the Church gains life;” when in truth, it is through evangelization that the Church, endowed with every good gift, imparts life to the world.

It is for all of these reasons that I, for one, will be keeping an eye on this week’s liturgical conference in Rome.