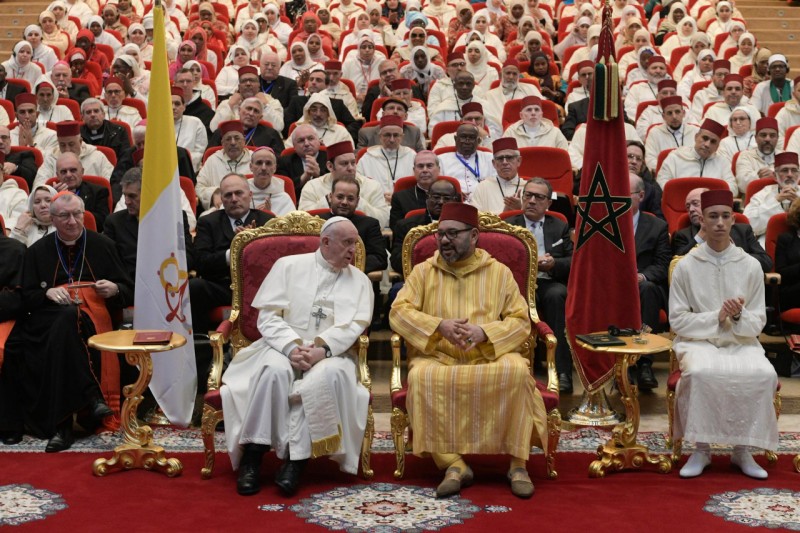 On Sunday, 31 March 2019, while on tour in Morocco, His Humanist (Jorge Bergoglio) addressed a gathering of priests, religious, consecrated persons, and a gaggle of heretics assembled under the banner of the “Ecumenical Council of Churches.”

The roughly 2,000-word speech invoked the necessity of “dialogue” and “encounter” nearly two-dozen times. Apparently, “Francis” (Jorge Bergoglio’s stage name) wanted to reassure Morocco’s Muslim majority that they need not fear anything that even remotely resembles authentic Catholic evangelization; either from himself or from the members of the sect that he presently represents. He said:

For Jesus did not choose us and send us forth to become more numerous! He called us to a mission. He put us in the midst of society like a handful of yeast: the yeast of the Beatitudes and the fraternal love by which, as Christians, we can all join in making present his kingdom…

Folks, among self-identified Catholics, only the invincibly blind, ignorant or disinterested can possibly conclude anything other than the fact that this “Jesus” of whom Bergoglio speaks is not Our Blessed Lord; rather, it is, in the words of Pope St. Pius X, a “distorted and diminished Christ” (Notre Charge Apostolique, Against the Sillonist), a rank imposter.

This #FAKE “Jesus” is a figment of the conciliar mind; it is the false god of the church-of-man, the mission of which bears no resemblance to the mission given by Christ the King to His Church – the same of which Pope Pius XI wrote:

In view of the common teaching of the sacred books, the Catholic Church, which is the Kingdom of Christ on earth, is destined to be spread among all men and all nations. (cf Quas Primas– 12)

And how is this Kingdom of Christ on earth to be spread?

Going therefore, teach ye all nations; baptizing them in the name of the Father, and of the Son, and of the Holy Ghost. Teaching them to observe all things whatsoever I have commanded you: and behold I am with you all days, even to the consummation of the world. (Matthew 28:19-20)

Jorge Bergoglio, by contrast, preaches a very different mission; one carried out in service, not to Jesus Christ, but to the false god that he and his conciliar confreres worship.

In order to make this utter garbage appear Catholic, Bergoglio claimed recourse to the Saint whose name he stole in order to make himself appear papal:

In this context I recall the counsel of Saint Francis to his brothers as he sent them out: “Go out and preach the Gospel: and if necessary, also with words.”

This coming from he who just made public yet another exercise in verbosity, Christus Vivit, which weighs-in at well over 30,000 words!

In any case, don’t be fooled by the deliberate lack of context regarding the quote above –  St. Francis was simply making it clear that our deeds must give witness to our beliefs; because apart from this, our words will have little evangelical impact. For example, if a man were to claim to be Catholic and yet would refuse to genuflect before the Blessed Sacrament, well, we would then know that that man is a fraud.

Make no mistake, St. Francis (like every true Catholic) knew very well that in order to carry out the mission that was given to the Church by Christ, she and her members – especially her clerics – are required to use many words; teaching, exhorting, evangelizing, condemning error, inviting sinners to Baptism and conversion that they may be saved, etc.

Bergoglio wasn’t finished impugning the reputation of St. Francis just yet, however. He went on to say:

How can we fail to think of Saint Francis of Assisi, who at the height of the Crusades went to encounter Sultan al-Malik al-Kamil?

From the man preaching a #FAKE Jesus, it comes as no surprise that here we are presented with a #FAKE St. Francis. As for the real one, John Vennari (buon’anima!) set the record straight in the April 2002 edition of Catholic Family News, writing of his encounter with al-Kamil:

When brought to the Sultan, Francis said, “I am sent by the Most High God, to show you and your people the way of salvation by announcing to you the truths of the Gospel.” And when Saint Francis preached, the Sultan felt himself very much drawn to Francis and to the power of his words. So much so, that he invited Francis to stay with him.

“Willingly,” Francis replied, “if you and your people will be converted to Christ.”

Francis then proposed his famous challenge. He said: “If you yet waver between Christ and Mohammed, order a fire kindled and I will go into it with your priests that you may see which is the true Faith.”

Saint Francis entered the enemy camp and challenged the Muslim priests to go into the fire with him to see which one represented the true religion. The Muslims refused.

[The article is available HERE in full and well worth the time to read.]

What was St. Francis doing? He was proselytizing. And note very well the condition he presented to the Muslim, “If you and your people will be converted to Christ.” So much for accompaniment!

Jorge Bergoglio, however, has a different god and a different mission, telling his audience:

We are Christians because we have been loved and encountered, and not as the result of proselytism.

OK, at this, let’s define “proselytism,” or better yet, let’s allow Jorge to tell us what he means when he speaks of this. Readers may recall his “Top 10 Secrets to Happiness” (August 2014) wherein he said:

Don’t proselytize; respect others’ beliefs. We can inspire others through witness so that one grows together in communicating. But the worst thing of all is religious proselytism, which paralyzes: ‘I am talking with you in order to persuade you,’ No. Each person dialogues, starting with his and her own identity. The church grows by attraction, not proselytizing.

You see, when Bergoglio speaks of “proselytizing,” he isn’t talking about resorting to strong arm tactics in order to affect a conversion; rather, he is referring to nothing more insidious than persuading those in error to embrace the truth, especially in matters religious! That’s it.

The mission of the Church demands that her members, in particular those in the sacred hierarchy, do precisely this. As St. Paul writes:

As if this is not clear enough, St. Paul also wrote about persuading those in error to embrace the truth (what Jorge Bergoglio calls “proselytism”):

I charge you in the presence of God and of Christ Jesus who is to judge the living and the dead, and by his appearing and his kingdom: preach the word, be urgent in season and out of season, convince, rebuke, and exhort, be unfailing in patience and in teaching. For the time is coming when people will not endure sound teaching, but having itching ears they will accumulate for themselves teachers to suit their own likings, and will turn away from listening to the truth and wander into myths. (2 Tim 4:1-4)

Nothing could be clearer: In order to carry out the mission given by Our Blessed Lord, the Church must persuade others to accept the life giving truth that has been entrusted to her.

So, while it may be the case that the conciliar church-of-man does not grow by proselytism, the Holy Catholic Church most certainly does.

With this in mind, do not gloss over the one important truth contained in Jorge’s diatribe against proselytism, “Let us recall Benedict XVI…” Indeed, as I wrote back in 2017, when it comes to this, Francis is merely following in Benedict’s footsteps.

It is crucial for readers to understand that Jorge Bergoglio is not making this madness up as he goes along; rather, he is simply carrying on the conciliar revolution like Benedict did before him, and John Paul II before him, and Paul VI, etc., albeit in ways that are at times more shocking to the authentic Catholic conscience.

When Bergoglio and Benedict are long gone, another will simply take over as head of the new religion that emerged following the Council.

At this we arrive at the most important takeaway: The religion of Jorge Bergoglio – the conciliar religion – is a false religion; one that merely poses as the Catholic religion. It has #FAKE saints, a #FAKE liturgy, a #FAKE mission and even its very own #FAKE “Jesus.” For anyone who truly knows the Catholic Church – her Saints, her liturgy, her mission and her Founder, this much is entirely obvious.

For those who need more proof, Bergoglio provided plenty in just this one speech alone. For example:

Contrast this with the traditional teaching articulated by Pope Pius XII:

Now since its Founder willed this social body of Christ to be visible, the cooperation of all its members must also be externally manifest through their profession of the same faith and their sharing the same sacred rites, through participation in the same Sacrifice, and the practical observance of the same laws. (Pope Pius XII, Mystici Corporis – 69)

Not only is membership in the Mystical Body of Christ “about adhering to doctrine;” it’s about externally manifesting that adherence in the profession of faith!  Throughout the past six-plus years, the man known by many as “Francis” has externally manifested his opposition to the one true Faith.

As such, Jorge Bergoglio has made it perfectly plain that he is not, therefore, a member of the Body of Christ, and this by his own doing. Every self-identified Catholic with ears to hear and eyes to see knows it, and yet few have the backbone to state the obvious.

There are some in so-called traditional Catholic media who still insist on calling Jorge Bergoglio – a man who routinely preaches a #FAKE “Jesus” in support of a humanist mission, and who clearly despises the Catholic faith – “Holiness.” Indeed, speaking plainly comes at a cost. Please consider clicking below to help us continue in our efforts to defend Catholic tradition.

A public challenge to Kevin Symonds and the WAF